I was inspired early in the year by 3dPrintingDoctorWho and decided to take the plunge and buy a 3D printer of my own.

The first project I decided to try was making was the classic 80's console which debuted in The Five Doctors: 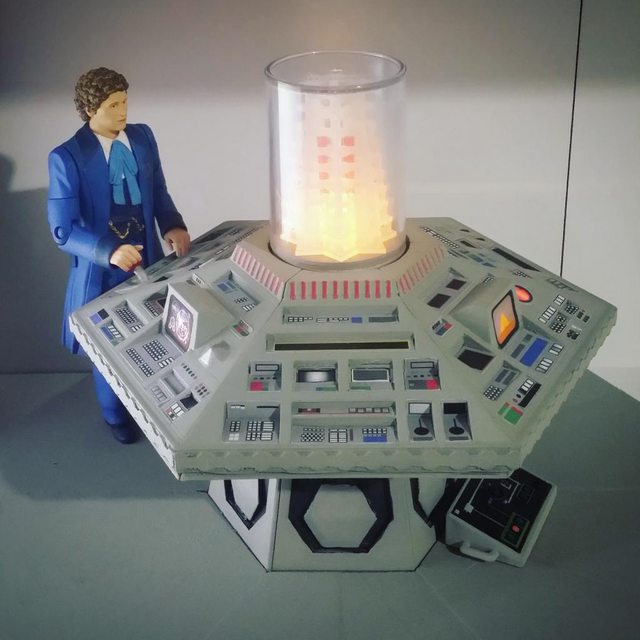 It's got working lights for the column and the screens 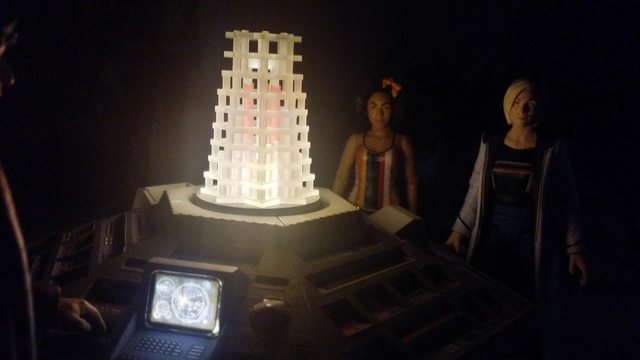 Lights up really well in the dark!
I used some stickers I found online for details as I wasn't confident enough to paint it all myself!

After that, I decided to try the wooden Season 14 Console: 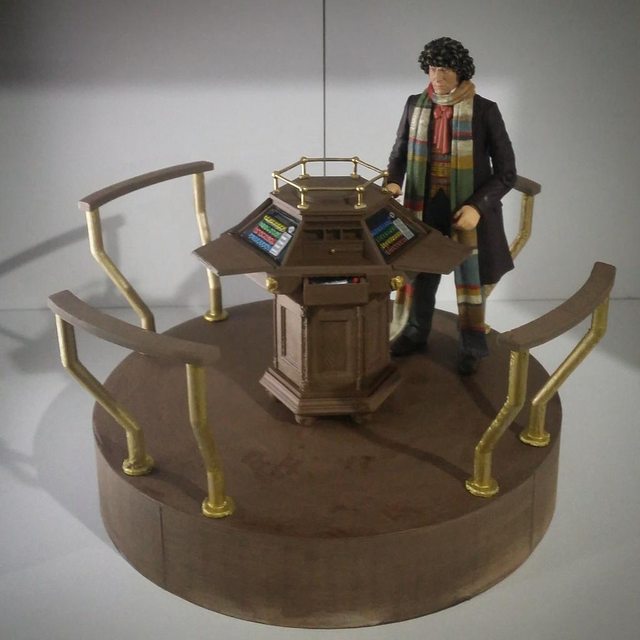 This was a fun build to do, it features a real brass rail on top, which is one of the only things I haven't printed myself, as I got it done through Shapeways. Jeffrey Fink created the original 3d files for the console, which I modified and then created a new base with railing to complete the look. 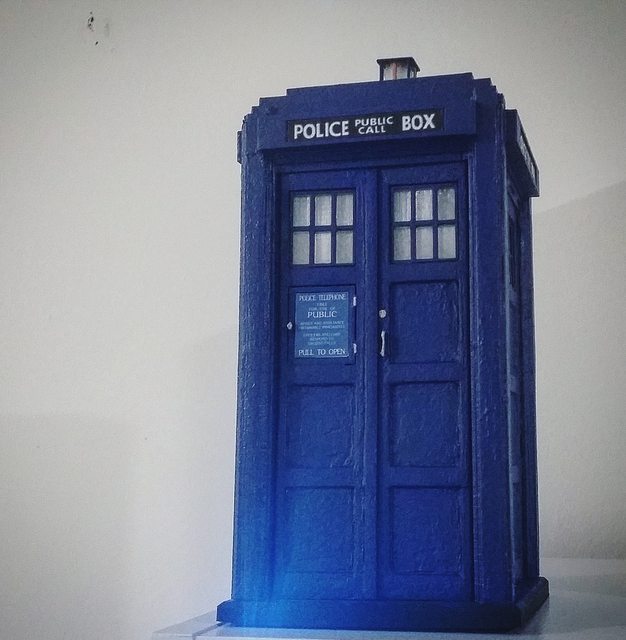 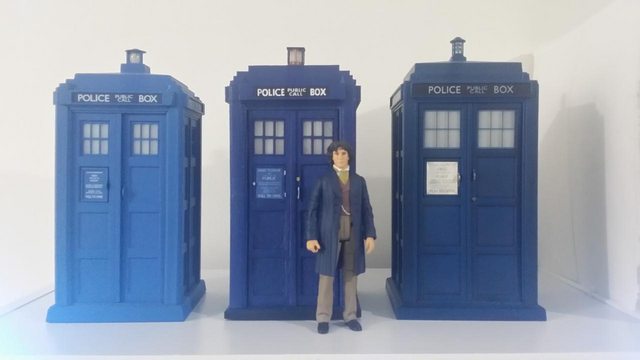 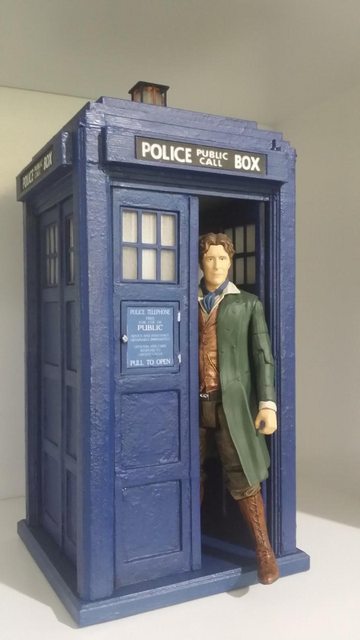 The doors can open!
I'm pretty happy with how this turned out. 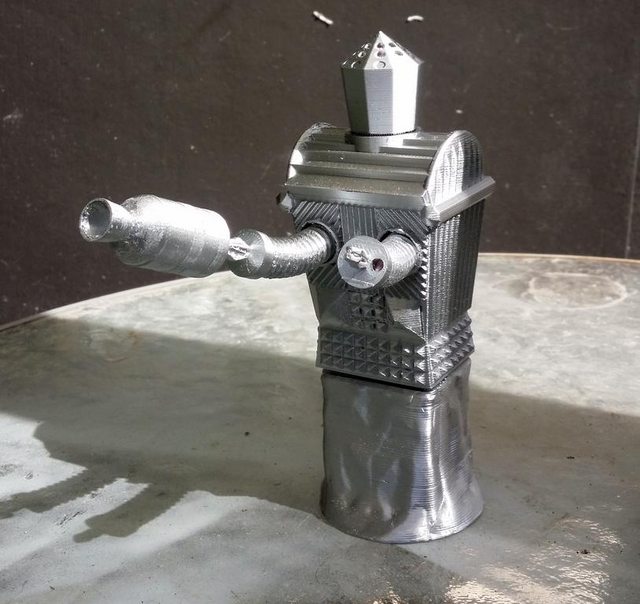 This photo was before I painted the arms - I need to take some updated ones!

60's Comic Book Golden Emperor:
This was a small side project while I worked on a much bigger (literally!) project shown below.
The files were posted on the 3D Printing Doctor Who facebook group, but I had some problems with them so ended up almost entirely redesigning this one. Fun to do though! 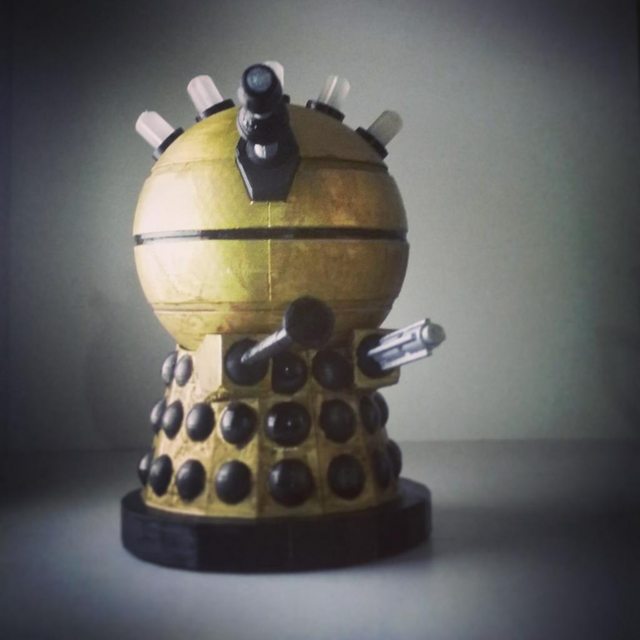 Next up was my biggest project to date: This was my take on the McGann Tardis console - I used some files originally designed by Jeffrey Fink (one of the sources that 3dPrintingDoctorWho started from for his (much more impressive!) version) 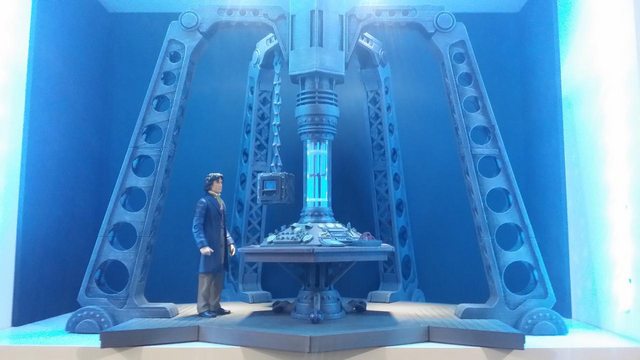 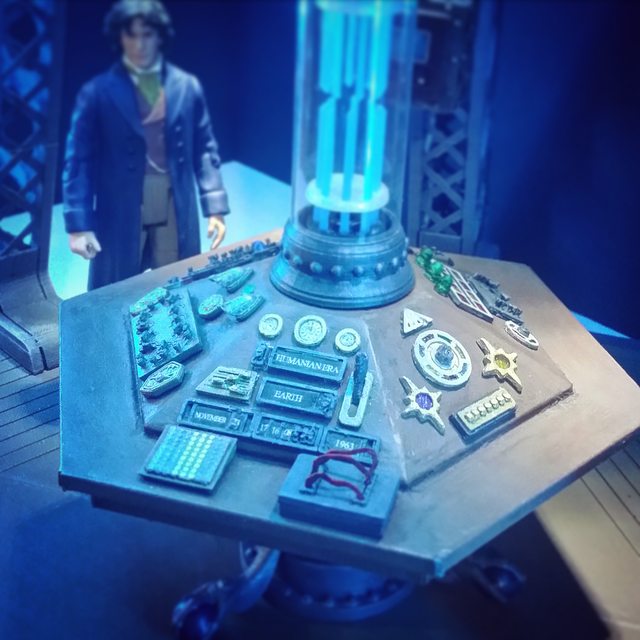 All the details, text, etc are very tiny stickers (some 1mm by 2mm)
I didn't add any lights or moving parts, aside from the scanner, which accordions up and down, and also swivels from side to side.
I did, however, add some lighting to the shelving itself, which I think looks pretty cool.

All three of my consoles together: 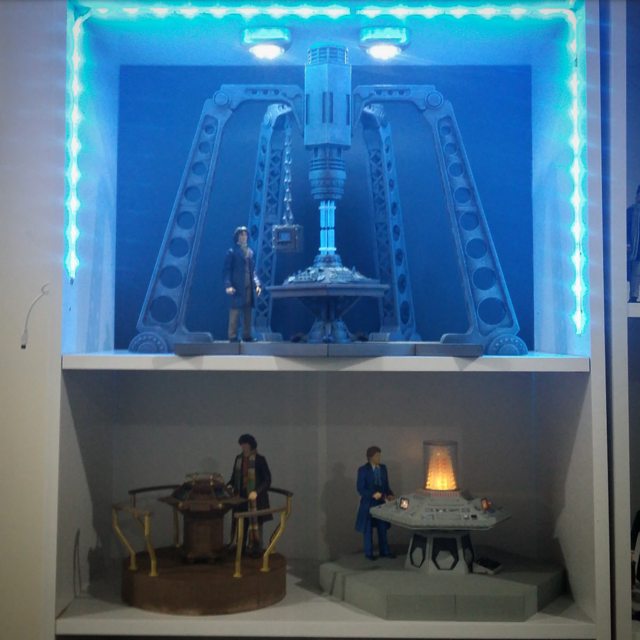 My latest Doctor Who related build is another Tardis exterior, this time the Newbery version from the middle Tom Baker years. 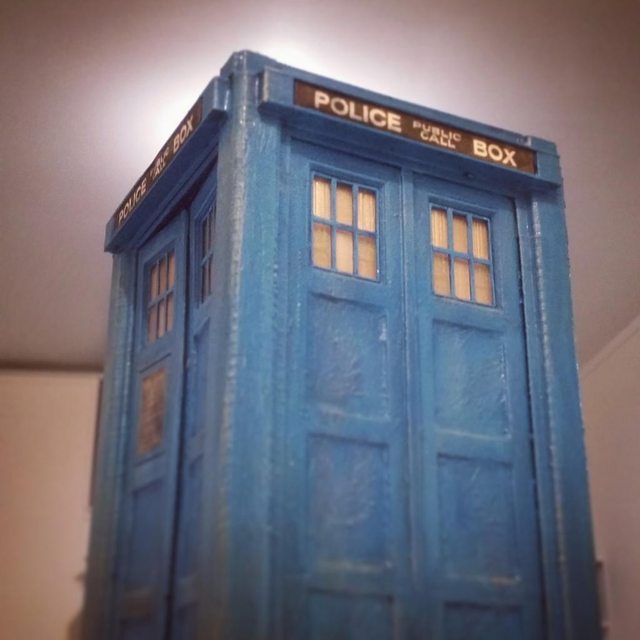 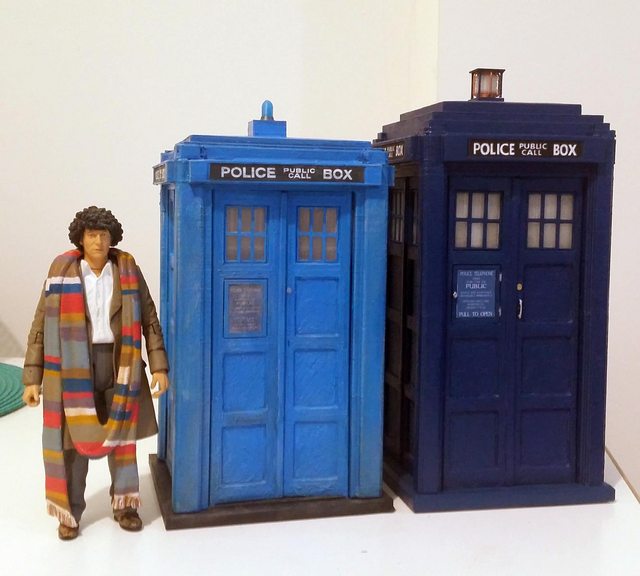 You can see it here with the City of Death Tom figure, and my McGann Tardis 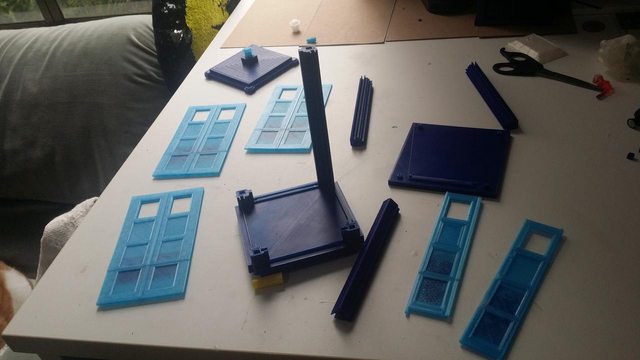 This is how it looks partway through assembly, and before any finishing or painting. 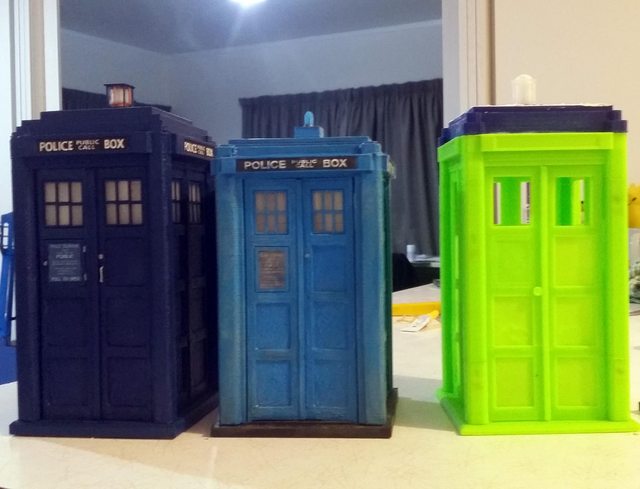 ...and finally, here it is with the McGann Tardis and an in-progress Hartnell original Tardis!

Sorry for the long post! Thanks for reading if you made it this far!

Wow, thank you all so much for the kind words!
Definitely feel very nicely welcomed to the board - will have to keep posting

On that note, here's a very raw work in progress: 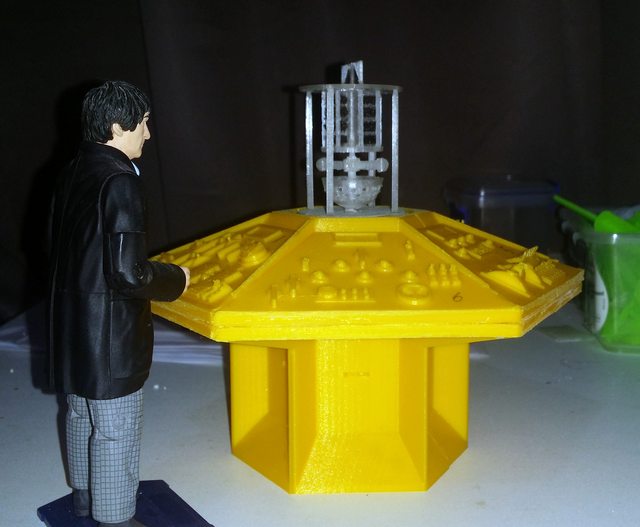 It's the original console seen from "An Unearthly Child" until "Inferno".
Here's a question for you all - the prop was painted a pale-ish green colour but was intended to appear white on-screen.
Do you all think I should paint it "prop accurate", or "screen accurate"?
Top

People tend to do prop-accurate, not to mention that that's screen accurate for inferno.

I have a very nice model of it that I bought from a customizer years ago. It's painted the pale green. It's fantastic, and I have no complaints, but I think I may have preferred it in white just a tiny bit more.

None of Doctor Who is canon.
Top

silentrepose wrote: ↑
Thu Oct 24, 2019 8:49 am
Wow, thank you all so much for the kind words!
Definitely feel very nicely welcomed to the board - will have to keep posting

On that note, here's a very raw work in progress:

It's the original console seen from "An Unearthly Child" until "Inferno".
Here's a question for you all - the prop was painted a pale-ish green colour but was intended to appear white on-screen.
Do you all think I should paint it "prop accurate", or "screen accurate"?

I think the fact it's seen onscreen in colour in inferno and I think also ambassadors and it's seen to be green would lean me into team paint-it-green. Theres nothing in the s1-6 scripts that I can think of where anyone says its white. It was white in twice upon a time, but that set lost all credibility as soon as they put in those curator roundels.

Thanks everyone - green it is!
Deborah, you're absolutely right that it's never mentioned being white in the scripts. I think I got that from the good 'ole Target novelisations (showing my age a bit there!)

(And yeah, definitely avoiding the twice upon a time look, as you say, no credibility at all!)

Thanks again for the advice everyone!
Top

Printed out some paper backgrounds for my console displays! 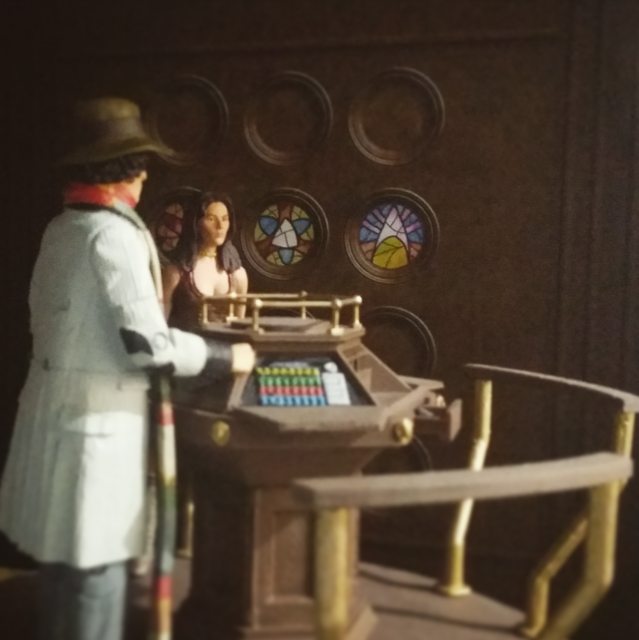 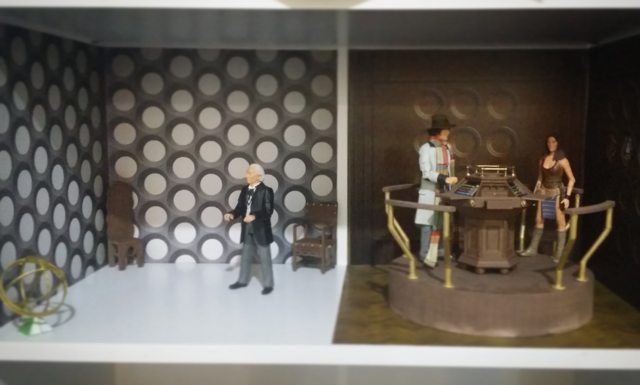 (Hartnell console was offscreen for painting when I took this!)
The chairs and the armillary sphere are new. 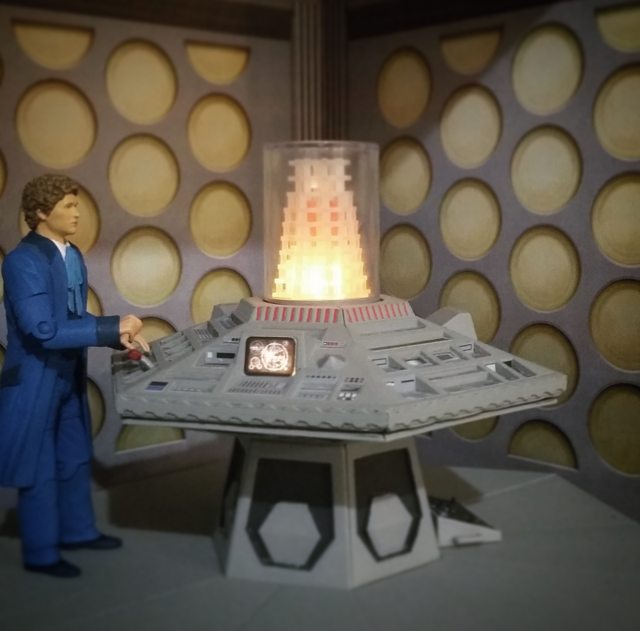 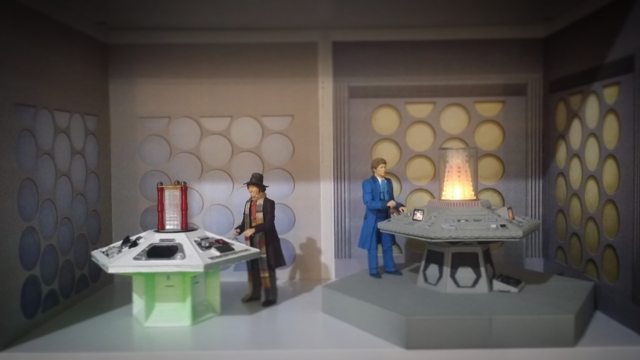 ...and yes, the Pyramids of Mars console is a new work-in-progress piece (ignore the green, that's the raw plastic colour that's being painted over) 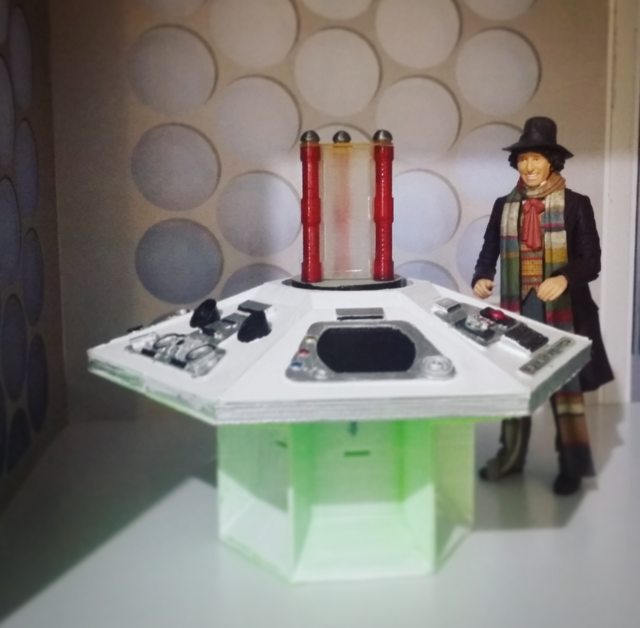 and last, but not certainly not least... I've got a Jodie Whittaker Tardis underway! 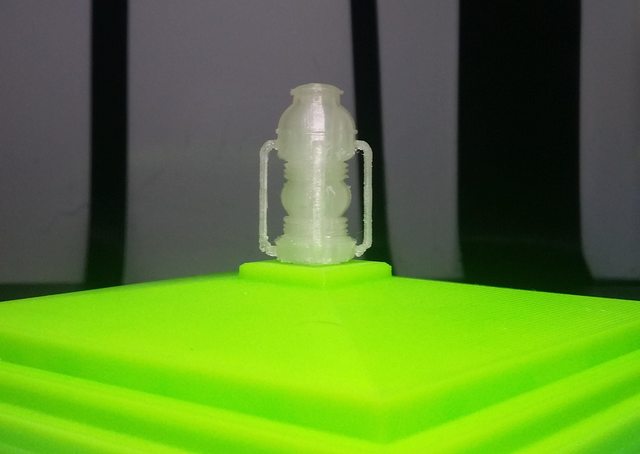 The consoles look great with the walls, did you get the images from the internet or make them yourself? I ask because I've been looking for some decent images for TARDIS walls myself and I feel like I've seen these images somewhere before. The Tom console is shaping up nice as well.

I have to say your paintwork is just amazing. Do you do it all by hand?
None of Doctor Who is canon.
Top
Post Reply
42 posts