For those who haven't seen the 2019 Character Options B&M sets release video, their next wave of figures includes a season 17 Newbery TARDIS from Shada.

As I promised when I started this project, I will immediately pull any figures as soon as Character Options releases an official version, so I've deleted the Newbery files off Google Drive and made the design private on TinkerCAD.

For any of you who already have the files, I ask you in good faith to keep them to yourself, and not to repost them or share with anyone else.
I'll get around to updating the website later to remove the dead links when I'm not dealing with major printer malfunctions.
I will probably rerelease just the fresnel lamp bit in a little while for anyone who wants to customize their Shada TARDIS to look more like the Season 14-16 version.
Top

After a brief leveling problem with my brand new printer, I got the first of six 8th Doctor console panels resin printed, and it's a thing of beauty. (This isn't even the most intricate panel)

The backlighting technique works great (I can light up 11 different components from just 2 internal fairy light LEDs) but the positioning has to be perfect for it to work. This is going to make final finishing work a nailbiting experience, as I have zero margin for error when I lock all the LEDs in place with transparent resin. I probably should have made room for two sets of LED string lights in the base plate to give me more wiggle room, but I'm not about to reprint the entire thing now. 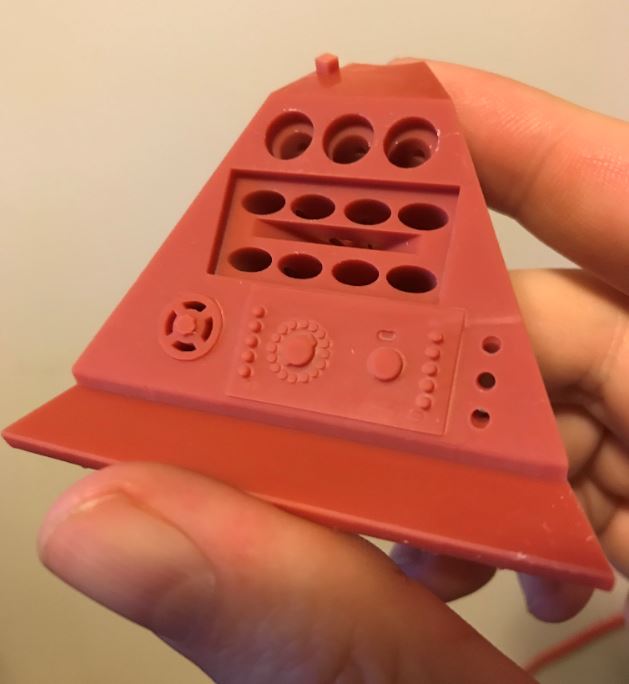 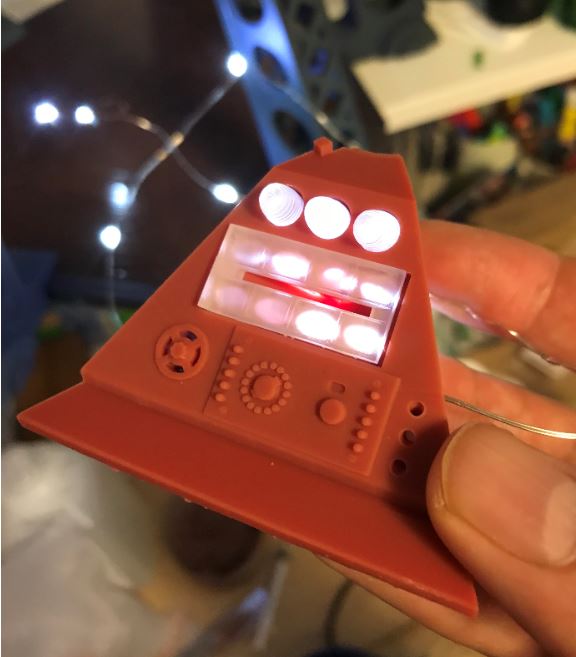 Love how this is coming together. If the fairy lights don't fit, can't you file the hole out a little bit?

You can. File, drill or dremel is the only way to alter this stuff once it's cured.

I realized last night that I made a stupid mistake when painting/assembling the floor plate. I grabbed a standard string of 10 LED fairy light out of my LED box and crazy-glued it in place, completely forgetting that I had specially purchased some 30 LED string lights, specifically because I knew the standard 10 would barely cover 2 panels. Luckily, it was pretty easy to pry the shorter set out of there without permanently damaging the model. Thank goodness I didn't go crazy and resin it in place. With the set of 30, I should have plenty to spare for the 5 panels that are illuminated and I won't have to be quite so precise in my placement.


Panel 4 (the one with the destination controls) is going to require some additional work. The stupid slicer software that comes with the AnyCubic inserted support column into the corners of two of the cylinder sections, which I didn't catch before printing, and are now impossible to remove or slot the destination dials around. That's something I'll have to adjust manually on future prints, but even without that, there are still issues with the destination cylinders and providing them enough room to rotate freely, but still lock in place. The grooves that they slot up through are also a major problem, since they structurally weaken the lower 1/4 of the console off during assembly, and even resin printing does not protect this section from snapping off. I may have a solution, but it'll require some changes in TinkerCAD.
Top

I found a big steel cabinet on Amazon large enough to fit both my Moai and Anycubic resin printers, and cut a 4” hole in the back (luckily dryer vent tubing is the exact same diameter as Dalek bumps, so I already had the hole saw handy) which I bolted two lengths of vent tubing and a low-noise circulation fan to, which will pump any toxic resin fumes out through my office window. (I’ve also got a regular free-standing air purifier up top to deal with any stray fumes from UV curing or the IPA bath.)
The taller cabinet also gives me a convenient standing height work surface for my regular FDM printer and a wash area immediately next to the printers themselves, so I no longer have to carry prints across the room anymore. Just to be safe, I’ve put down a massive clear vinyl chair mat, so if I accidentally drip while pulling prints off the machines, it can be easily wiped up and I don’t have to worry about damaging the carpet. 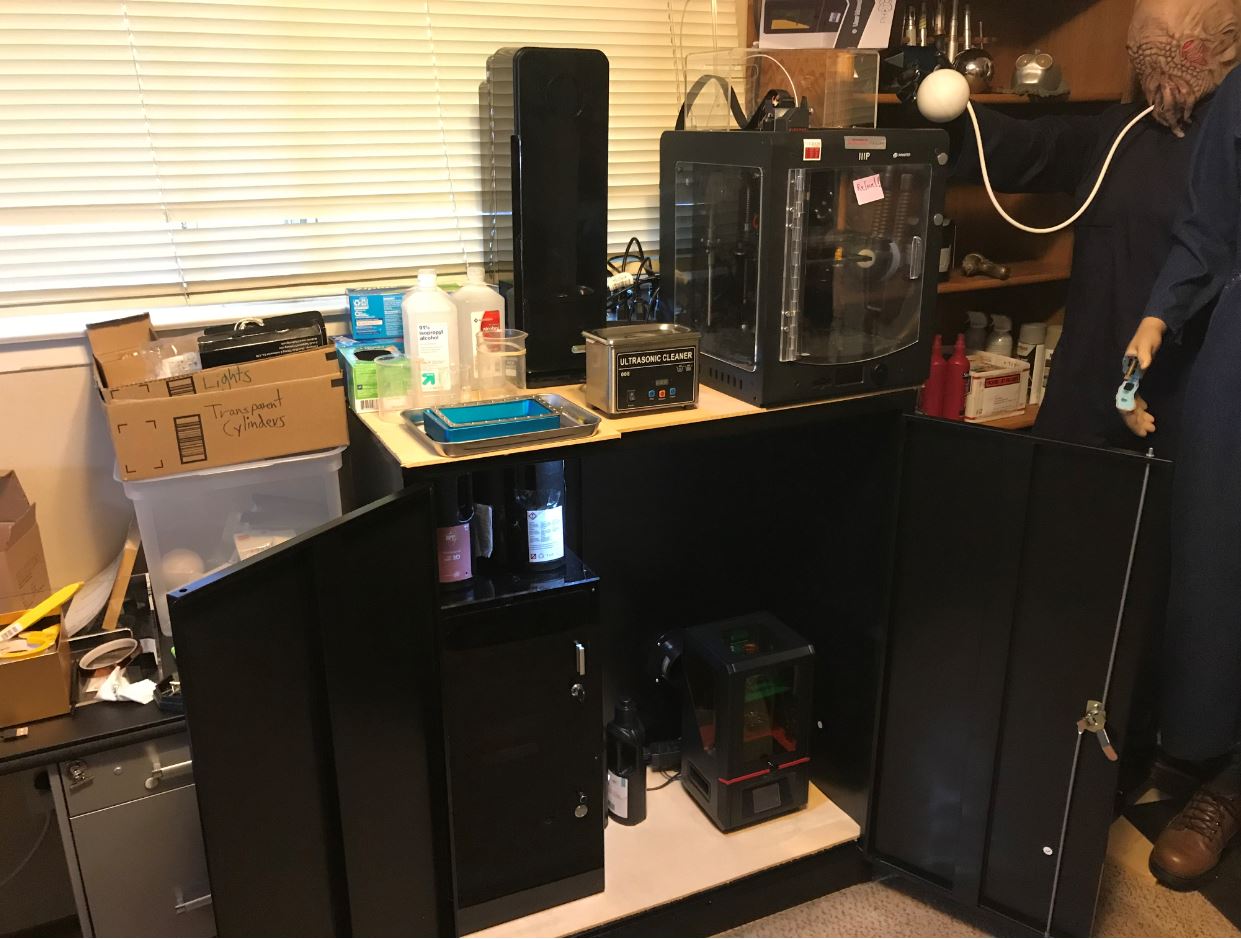 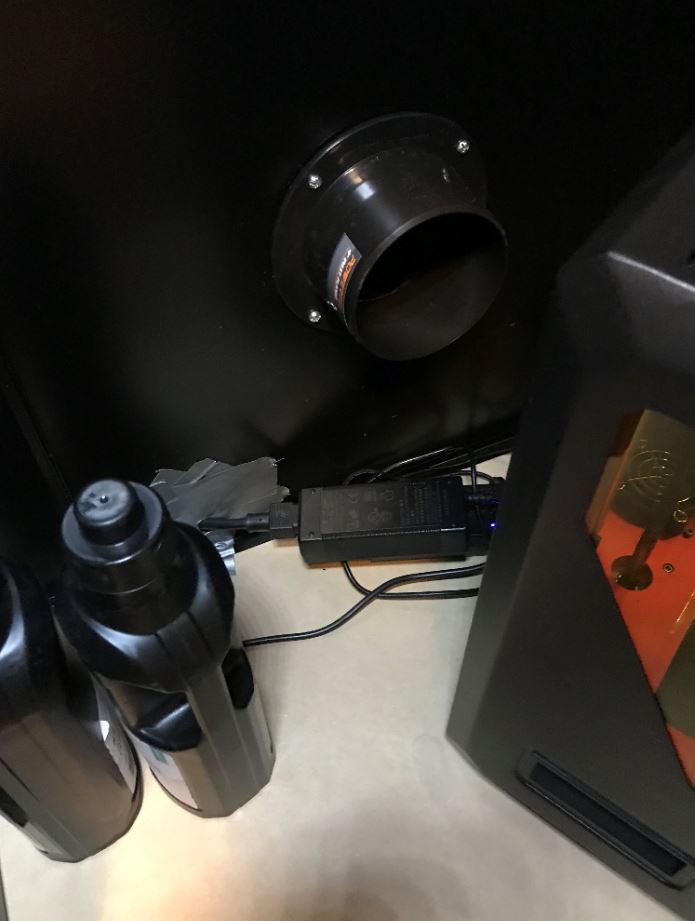 Unfortunately, the cabinet itself was a badly constructed piece of crap, and required multiple trips to the hardware store and some creative bodging to put right. In addition to having the sheet metal bent incorrectly at the factory (requiring me to cut off two large chunks of the base so that it could actually be slotted in place and the door would close), the whole thing was supposed to be put together using tiny 1/4" wood screws. The entire bottom shelf was supported by a single one of these screws on the front side, so while leaning on it (trying to screw in the top) the whole thing popped loose and caved in. I pounded it back into shape as best I could, then drilled a bunch of new support holes myself to shore it up, but it'll always have a huge divot and never be properly level again. Thankfully I still had some spare MDF out in the garage, which I was able to screw down over the top of the existing shelf to give me something flat to put the printers on top of. 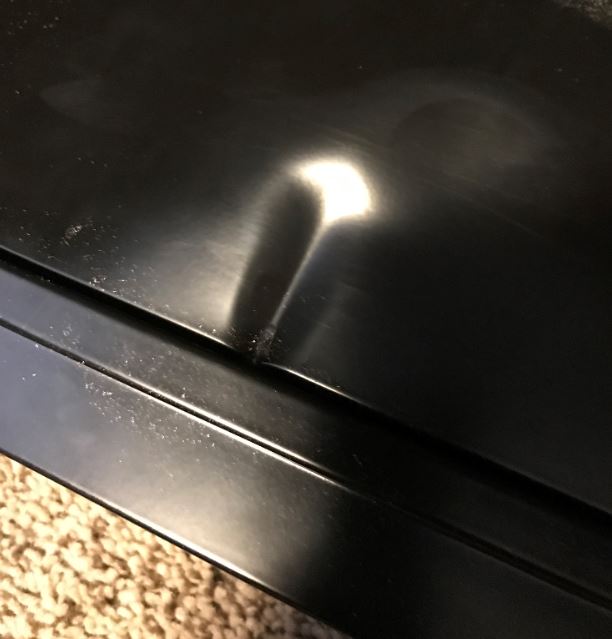 Back from a brief vacation, and I've now got black resin in the Anycubic printer. After 48 hours, I've had a mix of successes and failures.

First order of business was to reprint the destination cylinders, which look gorgeous, and the white lettering turned out perfect. After a few false starts I learned that the best way to get coverage is to paint two or three sides with a Testors paint pen, wipe off with a dry paper towel (which also helps force the paint deeper into the cracks) then wipe the surface vigorously with another paper towel soaked in 91% IPA.

Unfortunately, the cylinders still won't spin freely like they're supposed to.
I've come up with a potential solution, which is to make them hollow like beads and mount them on a brass rod that will get slotted in through a hole on the side. I'm pretty sure this will work, but it also involves reprinting both the cylinders as well as this particular chunk of console.

I don't want to go back and reprint, but I already know I'm going to go ahead and do it anyways, since I want this design to be the best it can possibly be, and there's no going back once I start to paint and attach LEDs.

Next, I reprinted the three main levers (which needed to be printed thinner to fit in the slots) and decided to also try reprinting the 12th Doctor's guitar (which just barely printed on my HD filament printer last time I tried it) as well as the Sonic Shades, which I hadn't printed before.

The guitar came out in exquisite detail (you can see every single fret and even the strings), but broke badly while I was attempting to remove it off the supports. The same fate befell several of the levers as well. I'm not quite sure why, but maybe the black resin is more brittle than the other types I've tried.

The sonic shades came through flawlessly, and the lenses are actually slightly see-through, like real sunglasses.) Alas, I got the scale slightly wrong, so they're obviously too big for his face. I'm reprinting them in the next batch and we'll see if these ones fit better. It's going to take some trial and error to find the correct width as well as the correct angle for the ear pieces so that they're tight enough to stay on his face, but not so tight they snap off. 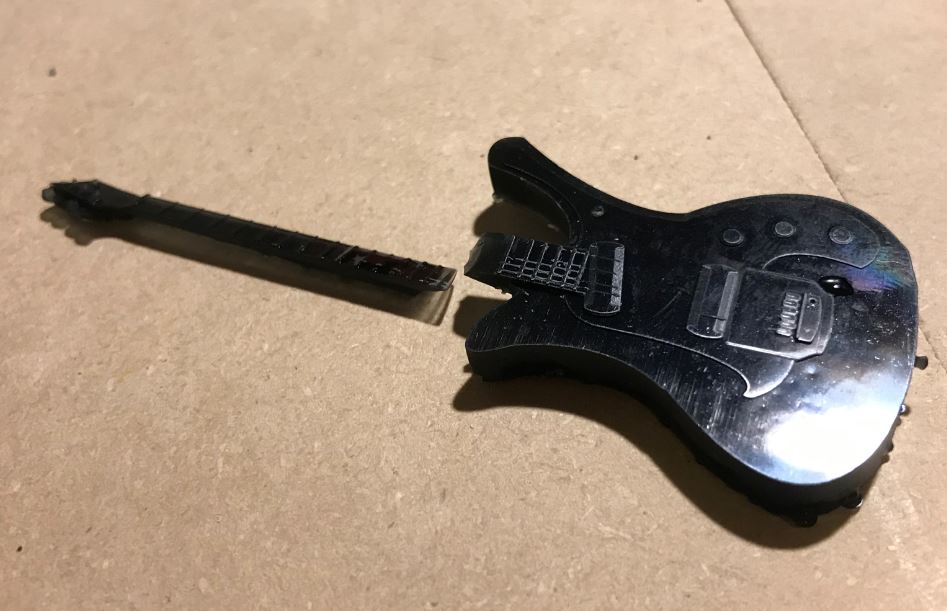 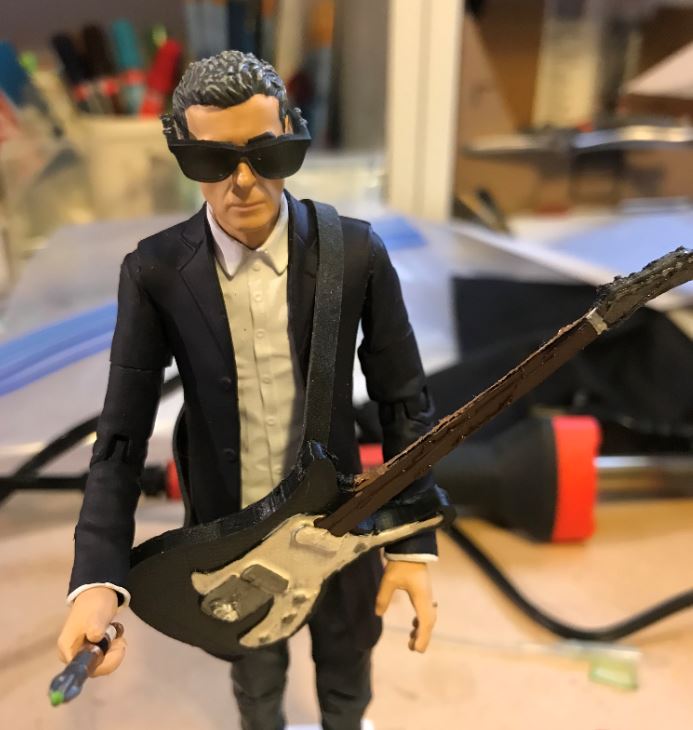 Some cool stuff here. Something I wondered was do you have any plans to 3d print a two doctors style sontaran gun, now that there is a styke figure with no gun? Just interested to know if that was something you were going to do.

Deborah J wrote: ↑
Mon Sep 02, 2019 8:47 am
Some cool stuff here. Something I wondered was do you have any plans to 3d print a two doctors style sontaran gun, now that there is a styke figure with no gun? Just interested to know if that was something you were going to do.

I will very likely end up doing that at some point.... That point being whenever I can get a Styke figure here in America without having to pay exorbitant scalper's prices on eBay.

I normally don't bother with accessories, but the "lozenge gun" is large enough that it should print fairly well on both FDM and Resin printers, and it's a bit disappointing CO didn't include one themselves.
Top
Post Reply
184 posts