It's the 3rd post on the first page of this thread: http://doctorwhotoys.net/forum/viewtopi ... &t=14#p156
As well as on the project website: https://www.3dprintingdoctorwho.com/todolist.html


The list is somewhat fluid as technology improves and I hone my skills and discover new techniques and tools. 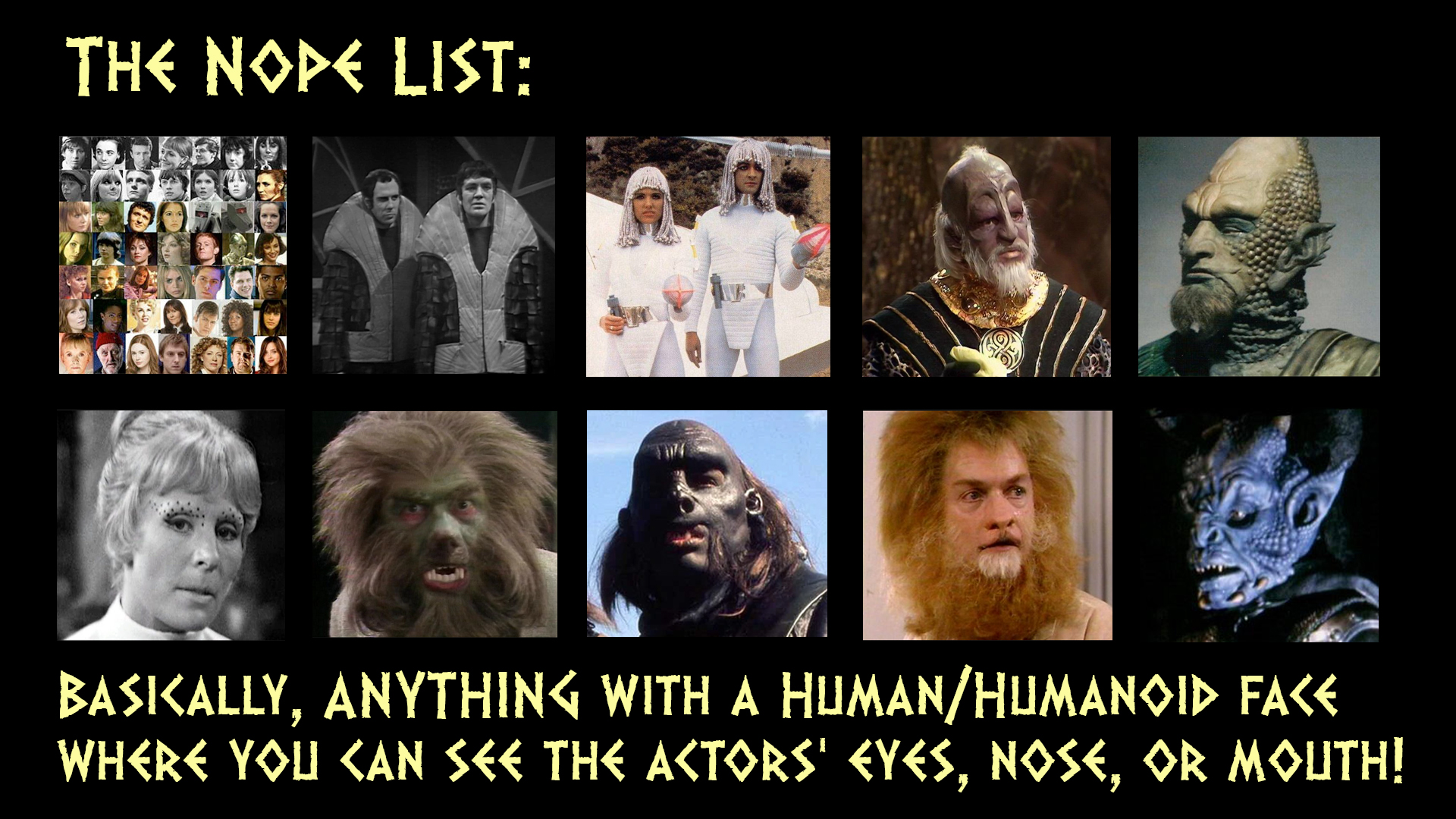 I'd say I'm now on the cusp of possibly being able to do some of those "nope list" humanoid figures, now that I have a resin printer, some slightly better face generation software, and a better grasp of using Meshmixer, but there's still a major bottleneck when it comes to TinkerCAD and importing high-polygon shapes. Additionally, the flexible resin that I've been using as an additive has the negative side-effect of washing out the finer surface details when printing, making the final print quality not much better than what comes off a standard filament printer.

I'll have to see how the Polly Wright figure turns out once I finish tinkering with it, but I suspect if I'm able to do faces at all, they'll have to be very generic non-actor specific ones like a Movellan, Drahvin, Ogron, Vogan, or Primoid. (Though I'm not going to build any of those from scratch myself. I'd have to find a fairly close premade body that somebody else designed, and then add bits and resculpt them in Meshmixer until it looks close enough to the Doctor Who monster in question.)
Top

Yeah, that list is pretty extensive. Very curious to see what you'll pick next. And curious if you can make a more human-like model print.
None of Doctor Who is canon.
Top

Sadly, this is something of a bittersweet victory because disaster struck during the final moments of assembly. The wires for the internal LED system snapped, and in the absolute worst place possible (right at the base of the first LED, where there was no hope of reattaching the wire further along, since everything was encased in clear resin) so all my hard work making the control panel elements light up were wasted.

At least the overhead light gives the time rotor a bit of it's distinctive bluish purple hue, but it's still nowhere near as spectacular as it could be.

I will probably go back and try to print another one at some point in the future, but this console has been almost a year of my life, and for now, I just want to move on. 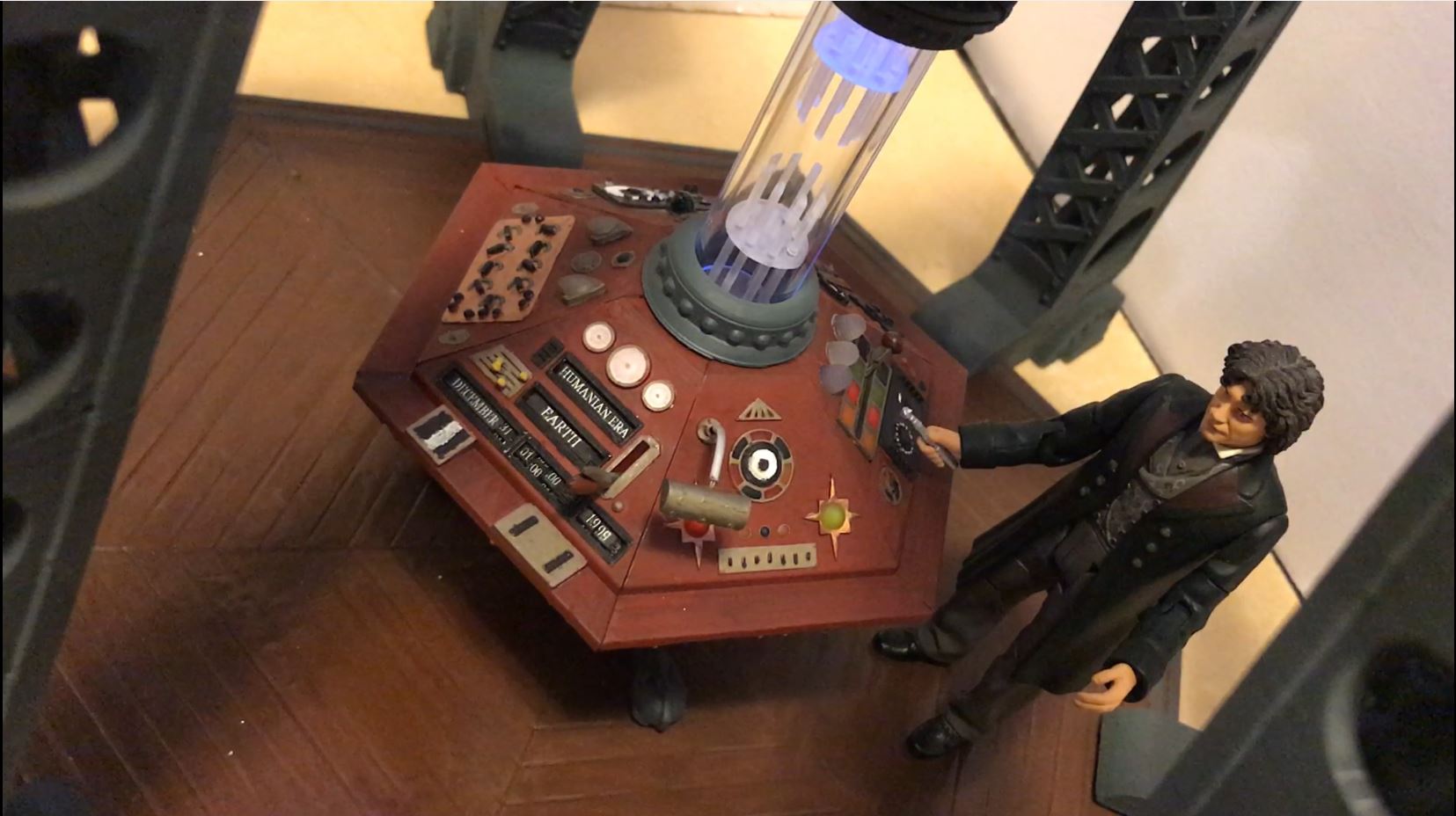 That's amazing! The console is brilliantly detailed, this is definitely motivating me even more to get a 3D printer.
Top

That's gorgeous. Sorry to hear about the broken LEDs, but it's an amazing work even without them.
None of Doctor Who is canon.
Top

I know I hinted earlier that my next figure would be the Nucleus of the Swarm, but I need something a little less taxing to decompress after my last couple of builds, so the good old Mk. VII Robotic Cleaner, it is.

I'm fairly certain I won't be able to make this one remote controlled like the War Machine, since the torso is too narrow, but I'm hoping there will be enough room for headlights and a small Lego pull-back motor in the base. I also plan on giving it an optional little wheelie bin to drag along behind it with a Yellow Kang foot surreptitiously hanging out the back. 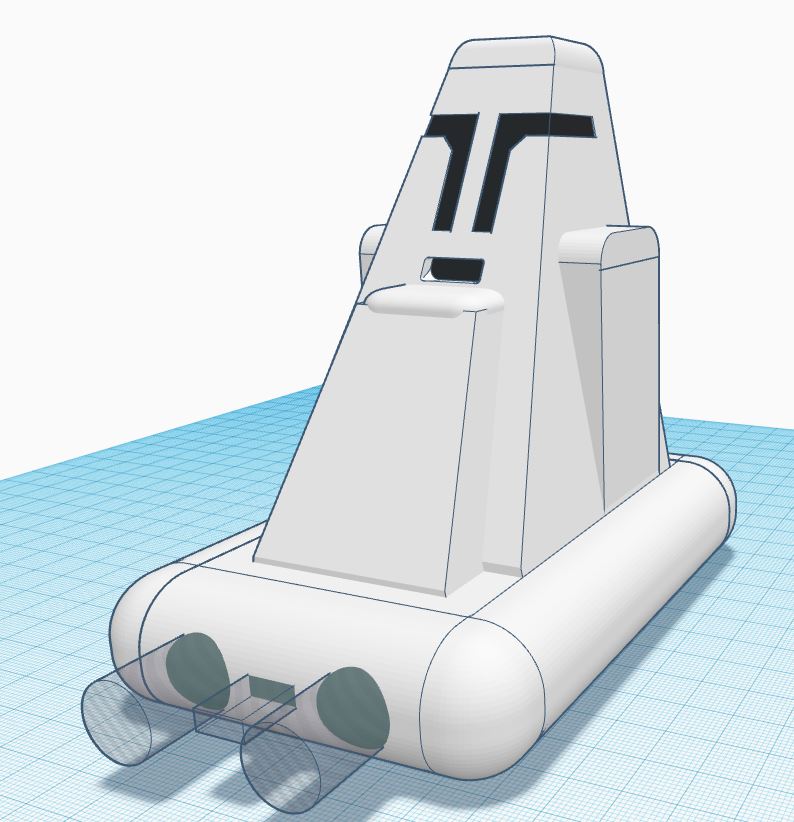 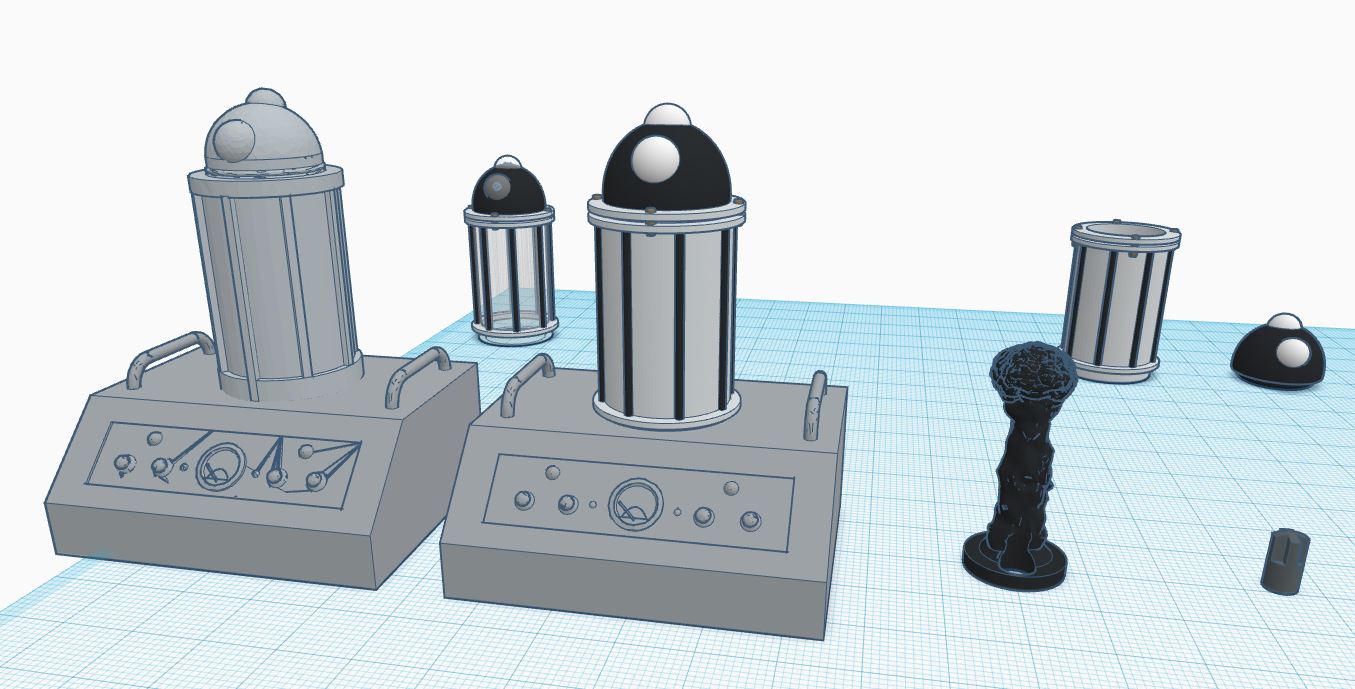 The new version has improved surface detail and an optional removable upper dome, so you can peer in at the exposed mind parasite (which now has an eyeball) as they do in Episode 6.

I've also made some minor tweaks to the Toymaker Robot, and will probably upload those later.
Top

I've been barely functional with the mother of all headaches most of this week, so I'm finally getting back to work on the Mk. VII Robotic Cleaner.

The accordion arms proved to be a bit more complicated than originally anticipated. I had hoped to make the central arm articulated to the point that it could fold back into resting position (I even duplicated the little cat flap piece directly below the arm that accommodates the claw) but there's no way to do that with the accordion bit as a solid lump of material, at least not without adding some very ugly gaps and ruining the screen accuracy of the model.

So, if it comes down to a choice between a Cleaner that can tuck it's claw in, and one that can reach up and throttle a 5.5" scale Doctor, I think the choice is pretty clear. Maybe I'll make an alternate arm later that's in the resting position for people who want one of each.
Last edited by 3DPrintingDoctorWho on Sat Nov 30, 2019 10:43 pm, edited 1 time in total.
Top

When it rains it pours. Today you get not one but two new figure releases!

I've placed the zipped beta versions for both up on Google Drive, and done a quick and dirty update on my Templates page, with more assembly details forthcoming. Fair warning, I haven't had a chance to fully print either yet, but I've got the first pieces started this morning. With any luck, I might have both completed in another 2-3 weeks. As always, if you're going to pay someone to print for you, probably best to wait for me or some of the other users to fully test it before shelling out any money for something that may not work. 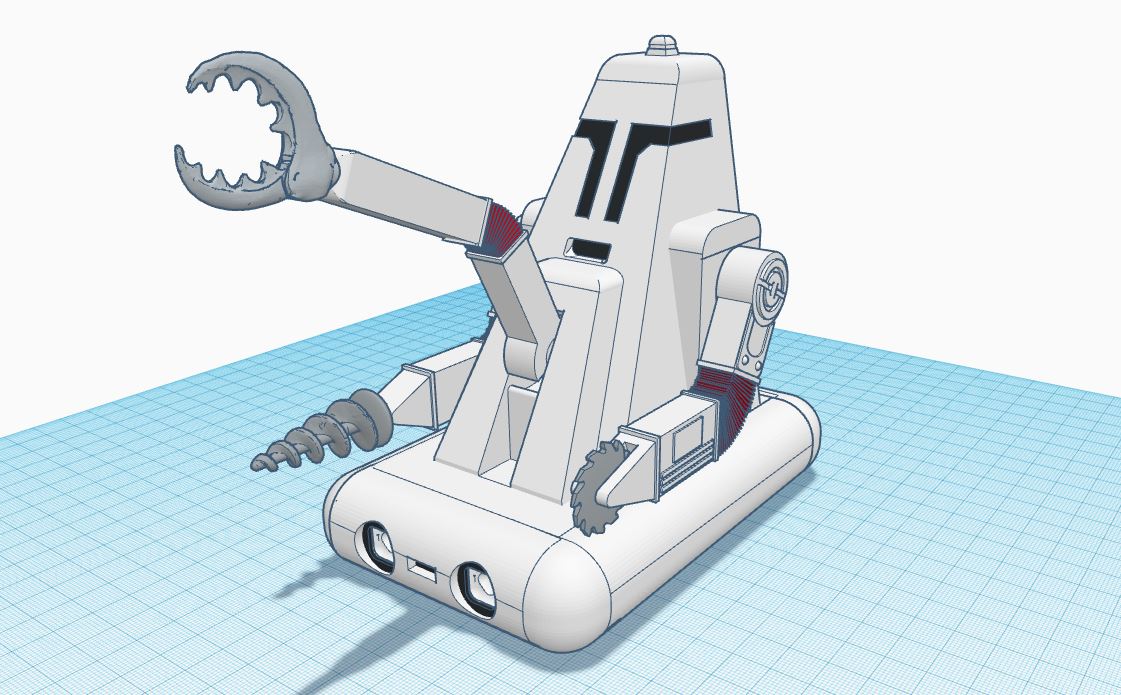 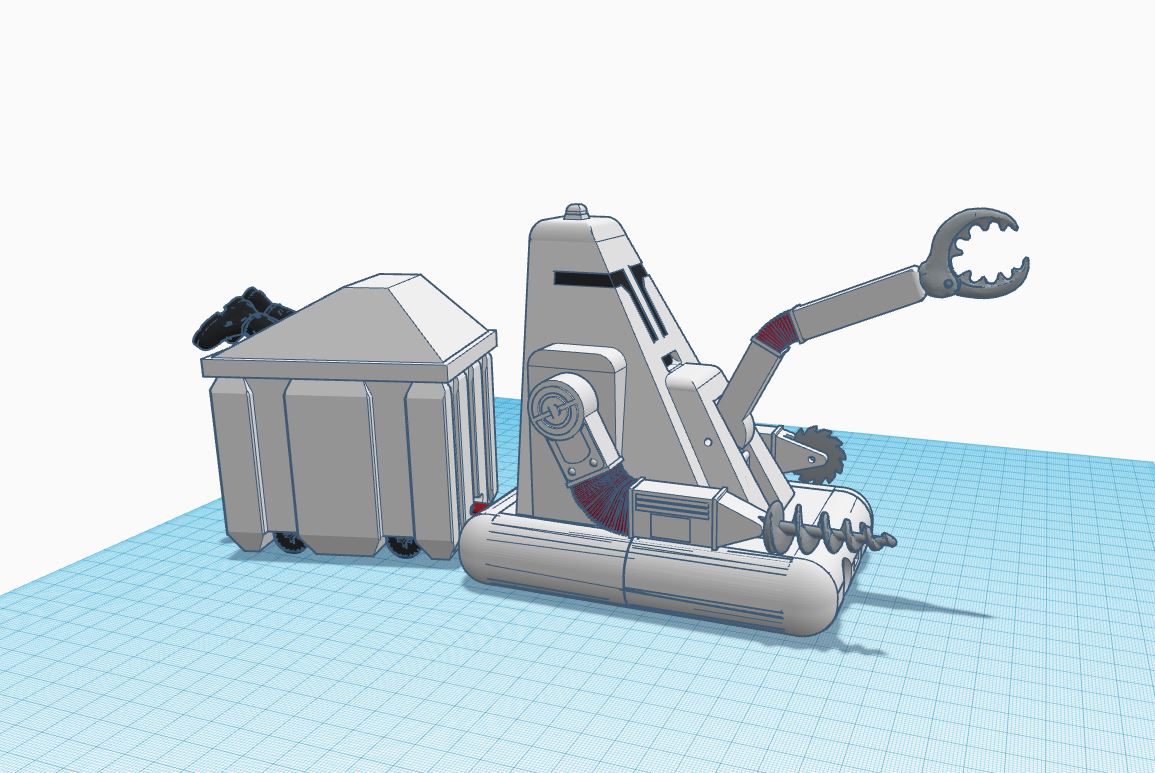 The Cleaner Robot is formatted with SLA resin printing in mind. If you have a high resolution FDM printer, you can try it in PLA+, but some of the smaller parts may self-destruct at the level of detail required. There is a separate folder inside the zip file containing the optional wheeled bin accessory and a set of legs to stick out the back, plus a set of free-standing Kroagnon eyes, if you don't want to print out the full figure.
There are also two versions of the saw blade. A tapered version that might come out sharp enough to actually cut you, and a flatter version that should be a bit safer if you have kiddies in the house.
The Wheelie Bin has a removable lid and a reversible 3-prong frame for the legs which will give you the option of sticking either one or two legs out the back, depending if you want your leg(s) to belong to a Yellow Kang or Caretaker.

The underside of the figure comes with mounts for UniBlock LED Bricks for the headlights, and a 47715c01 Lego Technic pull-back motor. If you are going to use the Lego motor, I recommend not even bothering to go with the printed wheels and axles and just use the following off-the-shelf Lego pieces instead (you can find most for a couple of cents each on https://www.bricklink.com): 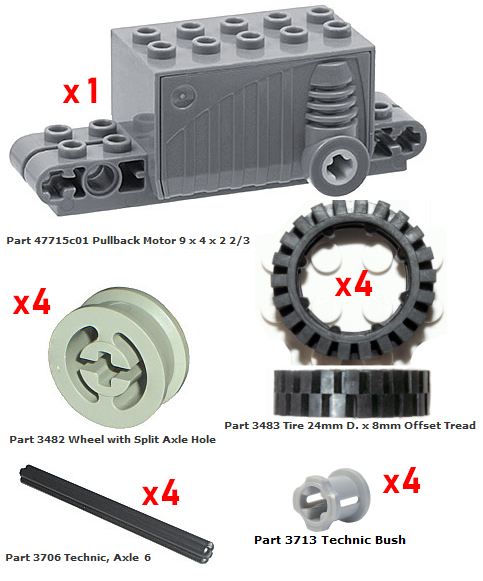 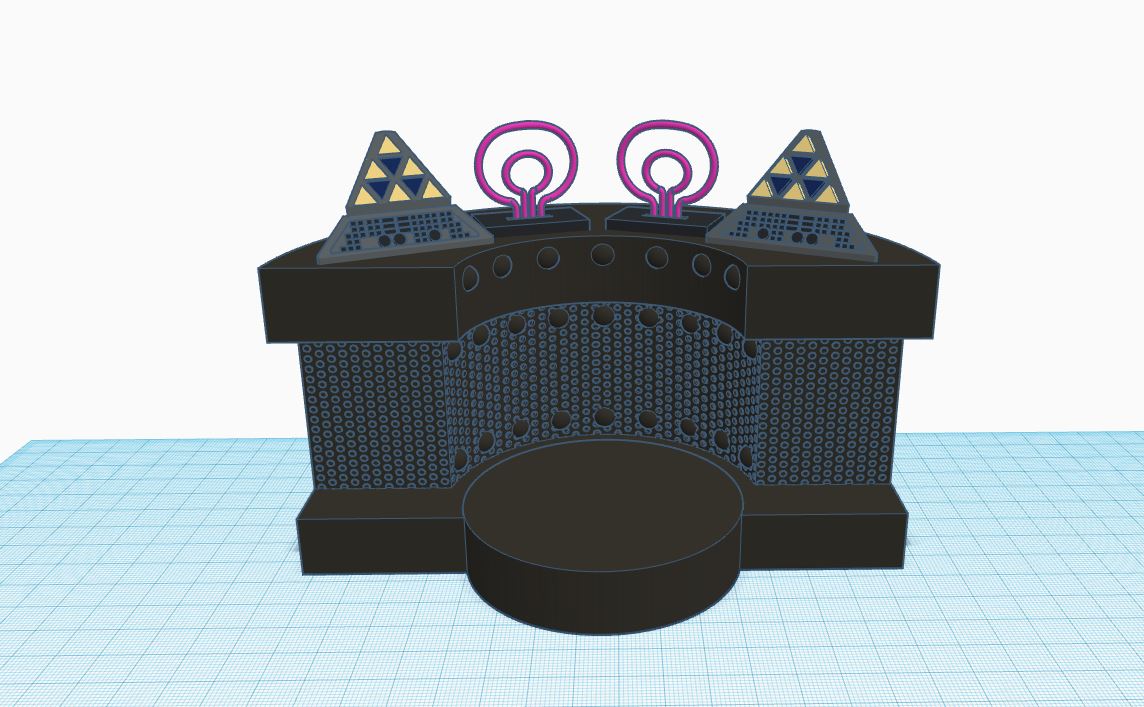 
Kroagnon comes with both PLA and SLA printing files. He's a big 'un, but he should fit on a standard 7" printing bed, or in a standard 65mm deep Anycubic Photon or Elegoo Mars FEP tank using the pre-split files for SLA printing. For some reason, they never actually showed the basement dwelling version of Kroagnon from the front during the transmitted episode, so this figure design is a bit of an "Artist's Reconstruction", inferring what I think the completed set piece probably looked like, based on what little photo evidence is available: 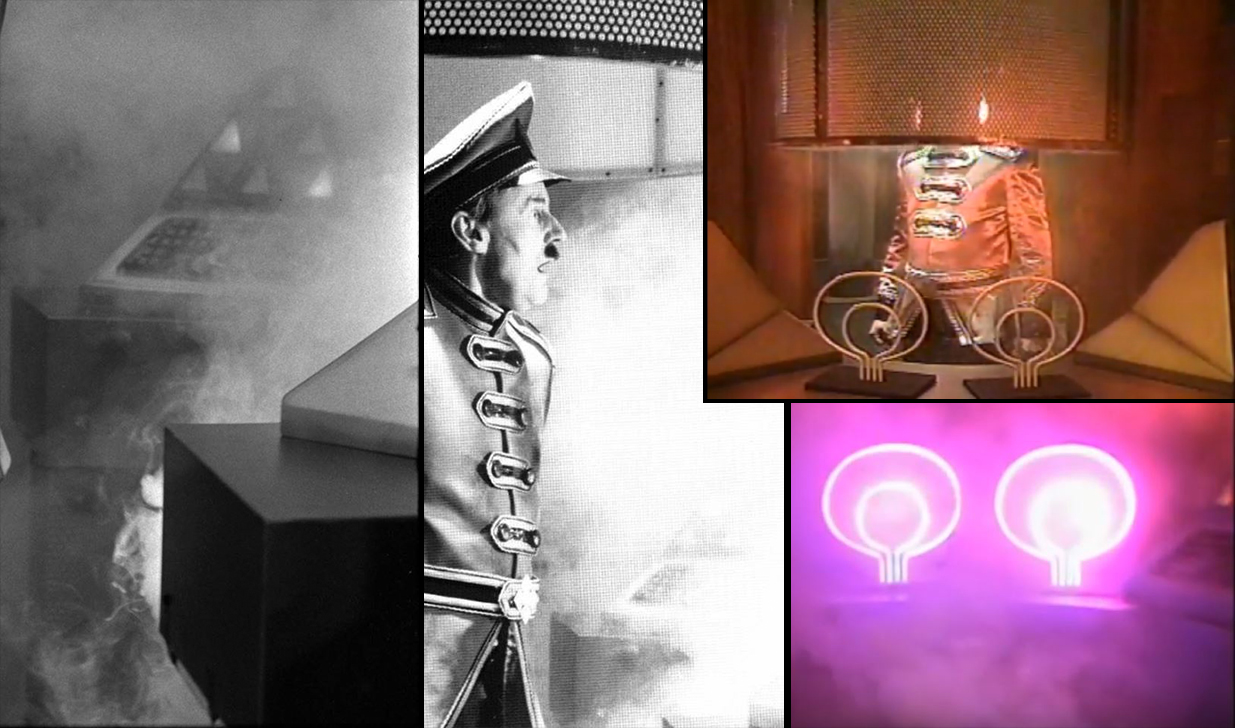 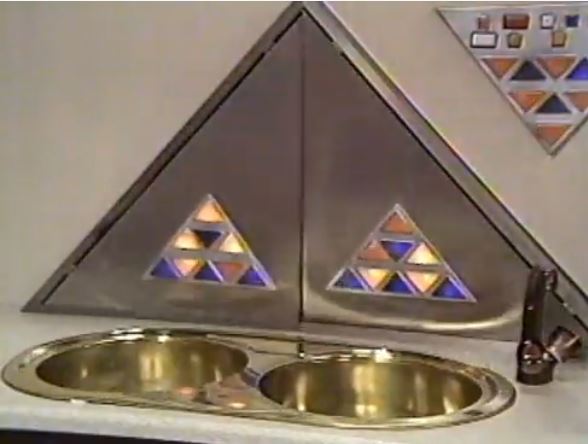 We know the general layout of the triangular controls, and zooming in I was able to identify that there are downward facing triangles on there as well, just very hard to see in the smoke. The layout is basically a flipped version of the upper right garbage disposal controls in the Rezzie's flat, and almost certainly had the same color scheme, where the downward facing ones were a dark purplish-blue and the upwards facing ones were an orangish yellow, and also back-lit to blink on and off. Sadly, there are no clear photos of the keyboard layout, but again, I inferred from a few other sets used elsewhere in the same episode (mainly the guard's monitoring station), and made the left and right versions mirror images of each other.

The middle section of the C-shaped desk area was constructed out of the same circular offset mesh as the cylinder that descends onto the Chief Caretaker and it had two offset rows of dalek-style bumps up at the top (I'm just guessing there might be a similar row at the bottom, as it gives the machine a slightly more face-like appearance.) We also know there was some sort of step up into the circular area where the cylinder descends, because we can see the mobile version of Kroagnon take a step down from it when he completes his transformation. What size and shape it was, we can only guess, but I'm going with a round dais, given that it would be more in keeping with the cylinder that descends from the ceiling.

This figure is designed to work with the button style of LED String lights, if you want to make the eyes and control panels light up and flash HUNGRY! There are two version of the triangular computer panels. A solid version for a static model or PLA printing, or one with built in recesses for the mounting of LED string lights and using color tinted UV resin for the triangles, similar to the technique I used for the 8th Doctor TARDIS console.
Top

These look excellent, i've been looking into getting a 3D printer soon and the thought of having a little cleaner robot to go with my figures is making me want one even more!

I've read your first post on this topic about printers but I was wondering if there are any you would specifically recommend, probably in the "lower" price bracket of 3D printers of up to about a maximum of £300?
Top
Post Reply
105 posts