I'm still having frustrating printer issues, but on the plus side, figure #29 is progressing nicely.
No prizes for guessing what it's going to be: 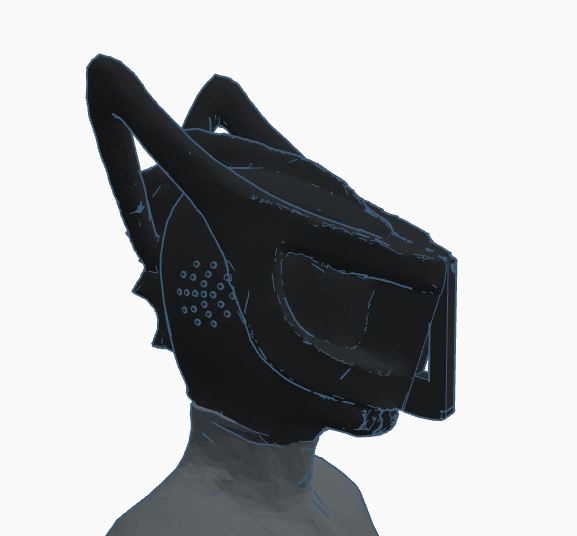 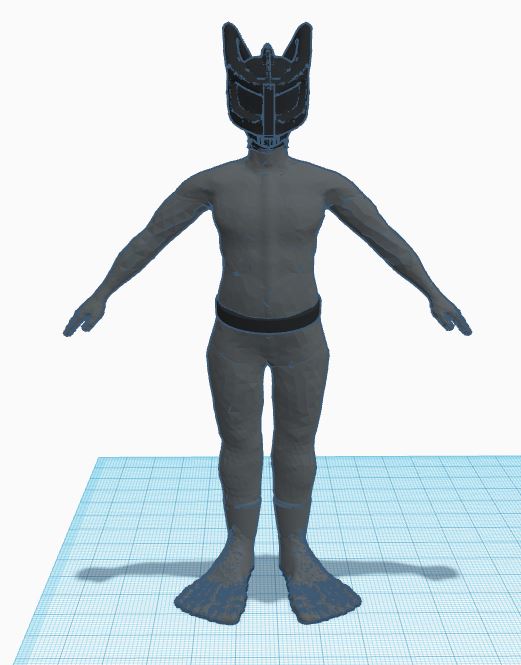 I've set aside the Polly figure for now, since the Voord isn't quite as badly impacted by TinkerCAD's upper polygon limit. (though it's still an issue.)
The Voord does have some rather tricky combinations of organic and perfectly flat elements like the front "nose" of the mask which required lots of juggling back and forth between Meshmixer (which hates uniform surfaces) and TinkerCAD (which can only do geometric shapes), but luckily the hardest bits are now done. The head may not be perfect, but I daresay it'll be a sight more accurate than the Eaglemoss figurine released a couple of years back that got several key details of the costume wrong.

Now it's just a matter of adding seams and other surface details to the body, and I can move on to the real purpose of this figure.... proving that I can recreate humanoid movement at 5.5" scale using only hard resin parts and a few 1.5mm brass rods. Theoretically I should be able to replicate and even *surpass* the level of articulation that most CO figures have, by combining my new spin socket design and elbow pivot into a single double-sided part, though in reality, the arms and legs are probably going to be too skinny to internally mount the socket sheaths, which require about 8mm of space. Still, the shoulders and possibly the neck should be okay.

If it works, which I'm fairly confident it will, I can then move on to figure #30, another mostly-humanoid shaped figure with complex movement that I've been dying to do for the last 3 years. It'll be a hell of a build, but I think I'm finally at a stage where I can pull it off.

Anyone for Fondant Surprise?
Top

Wow! That's impressive. I can't wait to see how you do the joints, etc.

3DPrintingDoctorWho wrote: ↑
Tue Jan 28, 2020 10:09 am
I can then move on to figure #30, another mostly-humanoid shaped figure with complex movement that I've been dying to do for the last 3 years. It'll be a hell of a build, but I think I'm finally at a stage where I can pull it off.

Anyone for Fondant Surprise?

Thingiverse's search algorithms are crap, but occasionally you get happy accidents from it's bizarrely unrelated search results, like today, when I was looking for Disney stuff for a family project, and I stumbled across a generic human figure in a crouching pose that just screamed out "Raston Warrior Robot."

It was pretty low polygon to begin with, but I've found that as long as I have the general shape in Meshmixer, I can fine tune the rest, and after only a few hours of work, I managed to get it pretty spot-on, even down to the silver lycra boots, love handles, stitching up the spine, and distressing crotch bulge... though most of that detail disappeared as soon as I imported it into TinkerCAD.

I just need to work on articulation (and possibly a subtle way to clip a lance to the underside of the wrist), and this one's ready to go.

I'm going to try to use the Bok figure from the Daemons set as an example for how I want the articulation to go, with the crouching position as it's natural "rest" state, but hopefully enough movement that you can still make it stand mostly upright (even if it's a little bowlegged) and do the leap in the air pose.

At any rate, this figure will now be #29, with the Voord following closely behind. 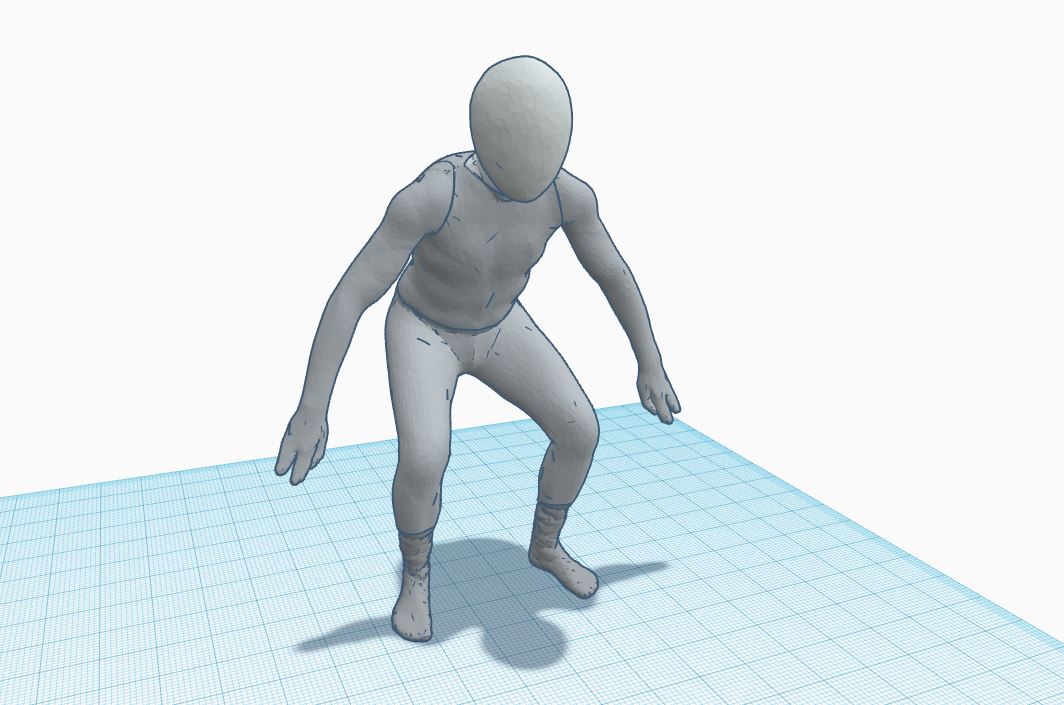 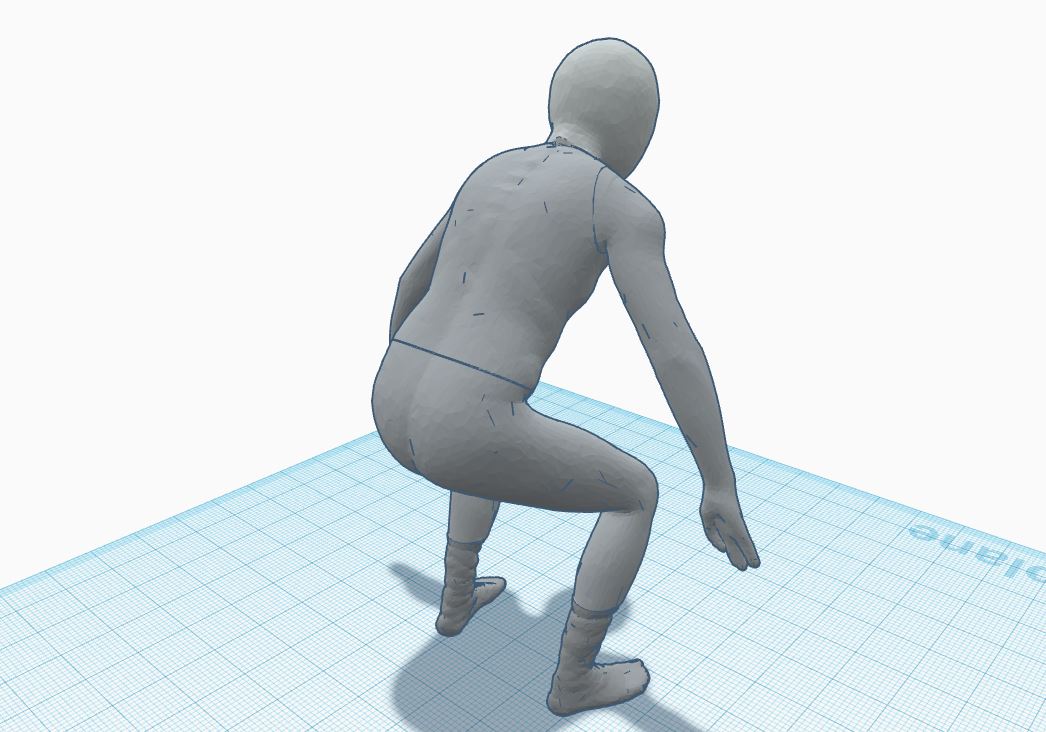 Nice! How complicated will it be to articulate all of the limbs?

Hey 3DPDW- how long would it take to print- not design or build, just print- say, a dalek? Thanks

That all depends on the printer you use, if I'm not mistaken.

Are you talking a 5.5" scale Dalek or a full scale life-sized one? Because some mad bastard actually did that, but it required a specially constructed framework to increase the total print area size and was undoubtedly more expensive and complicated than simply building one out of more conventional materials. I don't even want to think how long it would take. Probably upwards of a year, if you only had one machine and were doing it piece by piece.

If you're talking a more conventional 5.5" Dalek where you have the template already sliced up in CURA or Chitubox, from the moment you hit print... print time is still going to vary on several factors, mainly what sort of printer you're using (FDM or resin), your layer height (smaller layer height means more detail but longer print times) and how many pieces you have to split the model up into.

Resin printers print *WAY* faster than filament printers since they print an entire layer all at once in just a couple of seconds. How long it takes depends entirely on the maximum height of the object (i.e. total number of layers) but even something about 6" high (the maximum you can go) shouldn't take more than about 26 hours, even printing at maximum 0.02mm resolution. The bad news is, unless you have a super expensive $1300 to $2500 printer, your max build area for a single print is only going to be 65mm wide by 115mm long, which is a bit of a problem with Daleks, since a classic series Dalek skirt at 5.5" scale is almost exactly 65mm wide, and you still need room for a raft and supports. You might be able to flub the dimensions slightly and get it all in on one print, but assuming you want to be accurate or are printing a new series, Supreme, or Davros skirt, you're going to have to split the model into two, or more realistically three chunks: Front half of skirt, back half of skirt, and then torso and dome. You're probably looking at 8 hours for each skirt half and maybe 5 to 6 for the torso and dome. You can probably squeeze the eyestalk, gun, and plunger arm in around the larger pieces, and if you want the parts to move, you might need some other smaller bits and pieces here and there. So realistically, I'd say about 22 to 24 hours, depending on how quickly you can get parts on and off the machine. You can speed that up a little bit by increasing the layer height, but realistically because of all the curved surfaces, it's going to look like crap if you print at anything higher than about 0.05mm resolution.

Filament printing is significantly slower, though most FDM printers have a comparatively large build plate, so you could probably print the entire Dalek all at once if you've got a standard 7" x 7" print bed or larger. Layer height significantly impacts the print time of filament printing since the nozzle has to pass over every single point of the print multiple times to create a layer. At standard 0.10mm resolution, it would probably take 2-3 days to print an entire Dalek all in one go. The layer lines are going to be noticeable at this height, so if you have a really good printer, you can get down to 0.05mm or 0.02mm (the same as resin) but it'll take at least twice as long. Say 3-6 days. That's assuming everything goes flawlessly though. Filament printers jam or overheat all the time, or part of your design may become unstuck from the build plate, and if you're printing the entire Dalek all in one go, a failure means you've just lost the entire print, not just part of it. So, I would recommend splitting any figure like this up into multiple chunks the same as the resin version, so if something goes wrong, you aren't out quite as much time and wasted filament. Total print time will be only fractionally longer this way, so better to err on the side of caution.
Top
Post Reply
185 posts