So, firstly a few bits of "archive" material of older customs, then my latest piece, a custom 2nd Doctor Tardis! 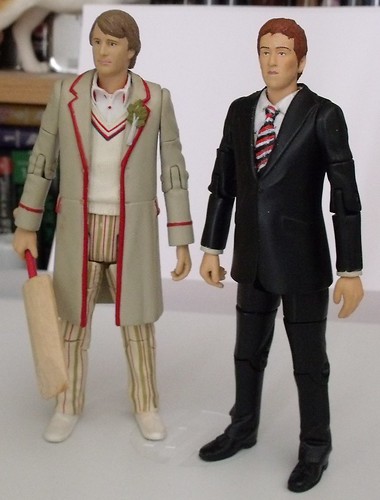 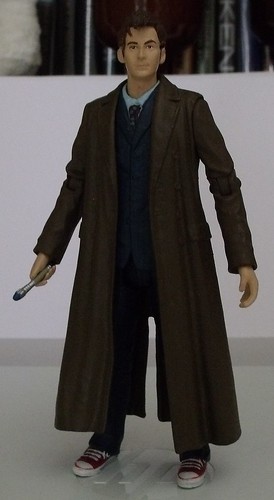 Liz Shaw (from the Silurians)

Something new, a Dark Eyes 8, with a rather lazy Bernice Summerfield on the right and an Izzy Sinclair on the left (though she's since been modified and will be reposted at a later date. Also, remember Somerfields?

And now, my modded TARDIS! I recently bought a £10 4th Doctor TARDIS, and decided to make a late 2nd/early 3rd Doctor TARDIS with cowboy accuracy i.e. it's not going to be accurate but it's as close as the official TARDIS's are to their models. I replaced the signs with regular and correct signs from the era from Tardis builders, glue sticked on, repainted the windows a dark grey, and weathered the whole box a little too much because it was just so much fun

For ref, from the Seeds of Death to Colony in Space: http://www.thedoctorwhosite.co.uk/tardi ... 66-tardis/

but it looked like a nice spot for some photos)

And one with the flash, showcasing the true horror of what I've done

Haha thanks Dan! Turlough was a nice and easy one, simple but effective, first one I think I made, too. Quite liked him as a character due to how different he was. And thanks on the TARDIS! Originally was only going to do the signs but it was too tempting to really go at it with the paint, the "dragged through a Welsh quarry" look really gives it some character I feel, interesting too, with no effort whatsever I was removing the pre-existing paint revealing a very deep blue underneath.

On a TARDIS vibe, still a work in progress with a long way to go but I decided to spruce up my TARDIS playset:

Made using card and cellotape, and held together with 100% pure hope and luck! Authentic 70s production values

You've done some really impressive customs, they're really nice. I made additional walls for my tardis back around 10 years ago, but I was looking for them to take pictures of a while back and found them in the attic, they're not in great shape at all. they're more like a straight vertical half-hexagon shape that goes round the back. Used to have a big base level papered card haxagon the set sat on too, no idea where that went.

Thanks Deborah! Your very kind, and that sounds fantastic! Quite honestly I am worried about how future proof mine is, took me literally hours to celotape the thing together. Next step is to replace the cardboard with metal mesh, thread leds under the upper floor, and drape some old headphone wire and shoe laces from the ceiling and the console
Top

Avon wrote: ↑
Thu Jul 11, 2019 7:36 pm
Quite honestly I am worried about how future proof mine is, took me literally hours to celotape the thing together. Next step is to replace the cardboard with metal mesh, thread leds under the upper floor, and drape some old headphone wire and shoe laces from the ceiling and the console

That sounds like it will look really great. And in my experience celotape lasts a surprisingly long time.

So.., no new TARDIS mods, but I've been trying to distract myself from some stuff at the moment by diving head first into customs!

Improved Izzy! I repainted the piping on her jacket, not quite comic accurate but almost real world translated accurate. Also repainted the boots white, no way I'm going to get them to look like Nike Falcons (unless I swap Clara's feet...) but I'm quite happy with her now.

Now the next one's a major work in progress, I wasn't sure whether to show him but hey, why not?

"sorry Sir a Sea Devil wasn't available for... your particular tastes but an automated replacement is available!"

Now, body is a regular Pertwee, shirt and jacket collar, cuff, and buttons modified, legs swapped and paint matched from the regen 4th Doc. I think that's a pretty decent approximation of Harry's outfit and build, tad too tall but alas, close enough. Now the head.., I had the insane notion I could use a regen 4th Doctor head and make a Harry out of that.. the paint work is unbelievably awful as he literally has about 14 coats of paint after endless "is this more Harry, is this more Harry, the eyes the eyebrows etc etc" but I don't know, it looks ok-ish...? trying to convince myself here.

Made with some tinfoil, and some Daz. Credit to Arnold Rimmer for the idea

Jamie! Feels so good to have a figure of him, 2 looks half complete (need Victoria and Zoe now). Need to fix those feet, but I used the upper half of a Connor Temple Primeval figure, with the PVC stripped off, except the scarf (to be honest though you could use him to make a decent Five Doctors Jamie), a Roman's legs modded, and a Nick Cutter head and shirt over the frame, with the kilt made from an Aldi shopping bag stapled together, and the knife and hand from my spares/a third doctor respectively

And now for something completely different.....

Abslom Daak! Yeah, I'll wait while you look him up

he needs a chainsaw though. Pertwee's legs, Connor Temple's head, Roman body, basically spare parts with lots of green dalek blood splashed about. Something about him looks really unintentionally authentic 1980's Dr Who which I love
Top

Well Harry passes the immediate recognition test, before I read the description I thought 'Hey that's Harry Sullivan!', so it's a success in that regard. The face is certainly the bit that lets it down somewhat if I'm honest, though I like how you painted his sideburns.

That Adric custom is savage. I like Adric, poor kid.

All the Jamie customs I see are usually made from a Jack S1 figure, it's nice to see a different base used for a change. The big question is, what's under the kilt?

And Cyberbois are doing massages now? The massage business is obviously the growth market of the galaxy atm. I expect the Sea Devils won't be happy with the competition.

I like your harry, I love harry anyway, so it's nice to see a figure of him, the jacket and trousers of Pertwee work really well for him. Only point I would make is that he could do to have his neckerchief, I see that as a big part of his look. But otherwise really quite nice.

Haha thanks both!! Really kind of you, Pertwee as a base was quite a last minute thing, initially I was using a Victor Meldrew body (and Harry would've had the cravat!) but, I checked the height and obviously laughed. But I had a Pertwee to hand and the mind wondered.. I definitely intend to replace the head, eventually, no matter what I did he either looked too sad or too angry or too Tom

but for now he'll do, till he annoys me haha.

How can you like Adric?! I cheered in Earthshock

some proper baggy NASA style pants, I shaved his knees, thats as far as it goes

I foresee a galactic war on our hands

gangster Baker will be in on it, the Moxx, forth episode cliffhanger- it's the Sontarans!

So I've almost completed my original aim - make a companion for each Doctor! So far, I have left to make out of my favs:

Stared one's I have parts and ideas in mind, but so far, I'm not doing too bad I think
Top
Post Reply
340 posts