MoarCrossovers wrote: ↑
Fri Oct 02, 2020 11:56 pm
Cleveleys store has all of the new sets except the Daleks and the Friends of the Thirteenth Doctor sets. Still need to check out all of the stores in Blackpool, but I checked out the largest of them on Thursday and they only had the Friends and Foe set in.

I thought they were only in stores from the 5th? We are talking about the zygon Tom wave?

Loads of people have got their’s already. I’ve even seen pictures of them in shops.

Yep they're appearing now, I picked up all but Zygons and 3rd/4th companions yesterday.
Top

A merry Christmas to all of you at home!
Top

Popped into the Keighley/Crossflats store; both new Dalek sets are in there as is the Davison TARDIS but no updated 3 x packs.

First up is the Davison TARDIS, which is basically a clean Androzani TARDIS with a few other differences. The tackiness of the weathering seems to have gone and the box now has more of a matt finish. The colour is pretty much the same as the previous version, but the windows are now a bit less yellow. I much prefer this to the Androzani one, if you missed that one then definitely get this, and even if you did get it this is a massive improvement. 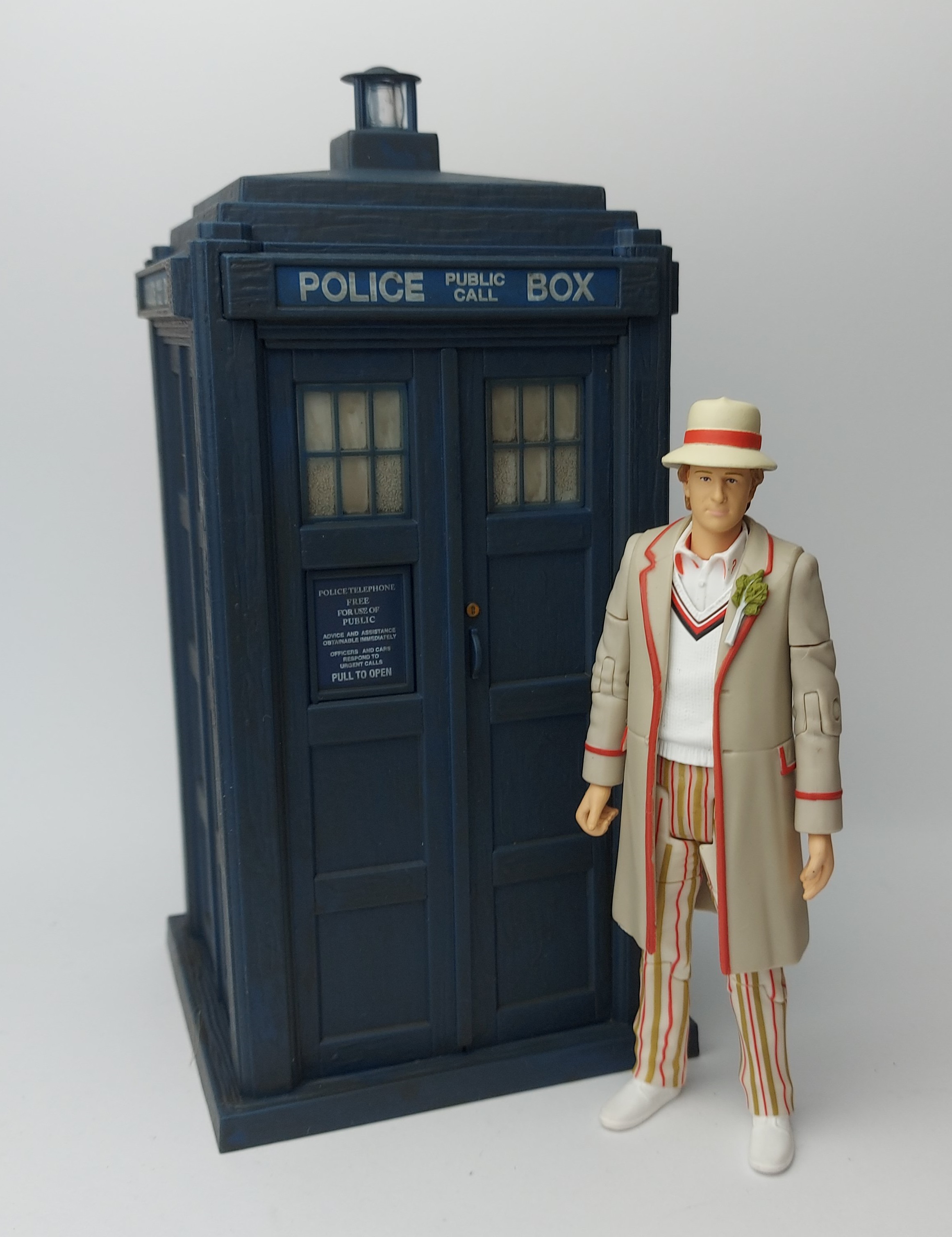 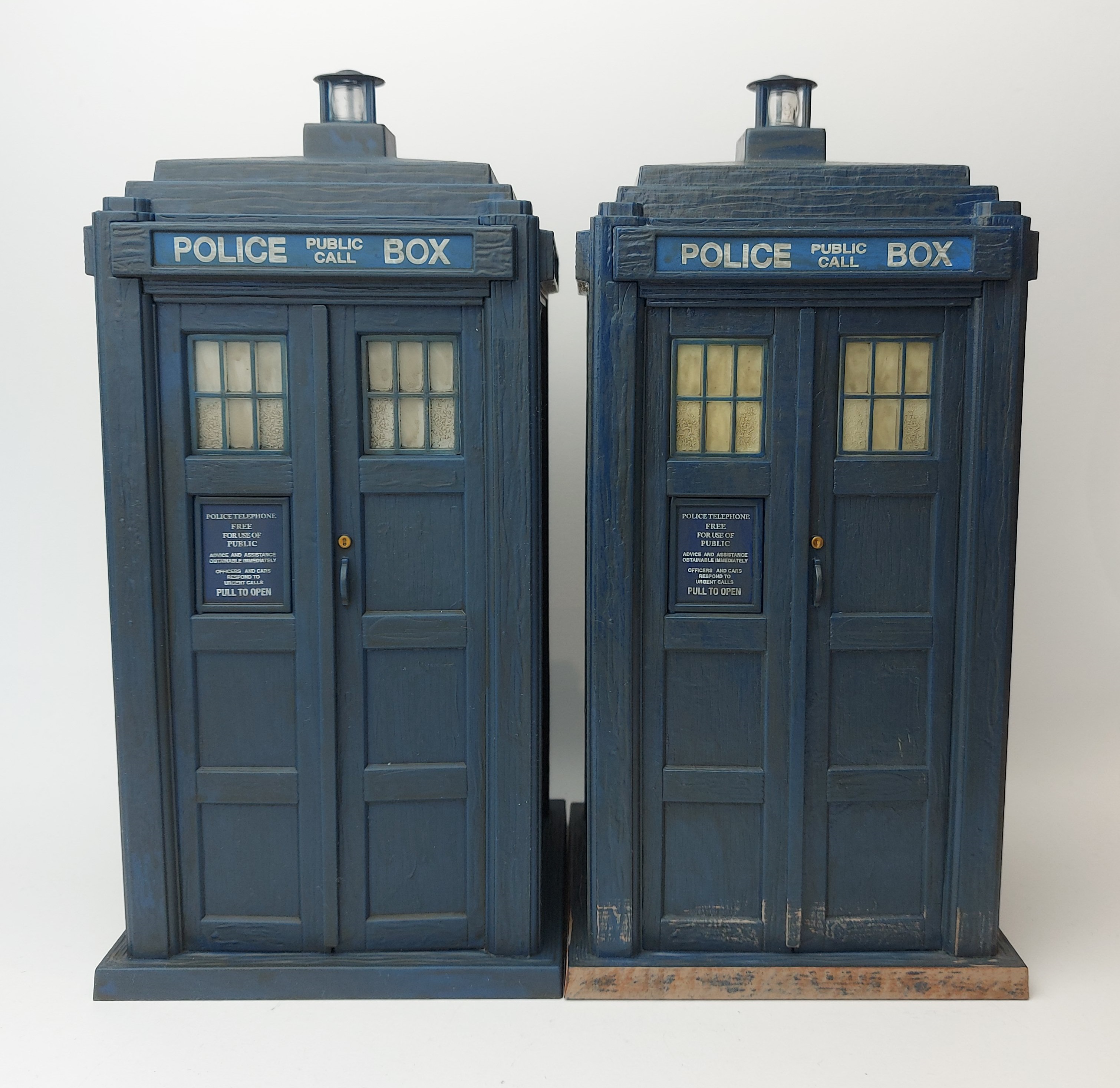 The Fifth Doctor figure is quite similar to the Planet of Fire version with a few differences. The jumper is much whiter, they've not painted the red button (which I think is actually more accurate) and there's a few slight colour changes to the hat, jacket, trousers and hair. The jacket and trousers seem to be moulded in the cream colour rather than it being paint, which still looks fine to me. There's also no weathering on the shoes. So not too different of a figure but it's still really nice, especially if you don't have the original, and I think the small colour changes make it look better. 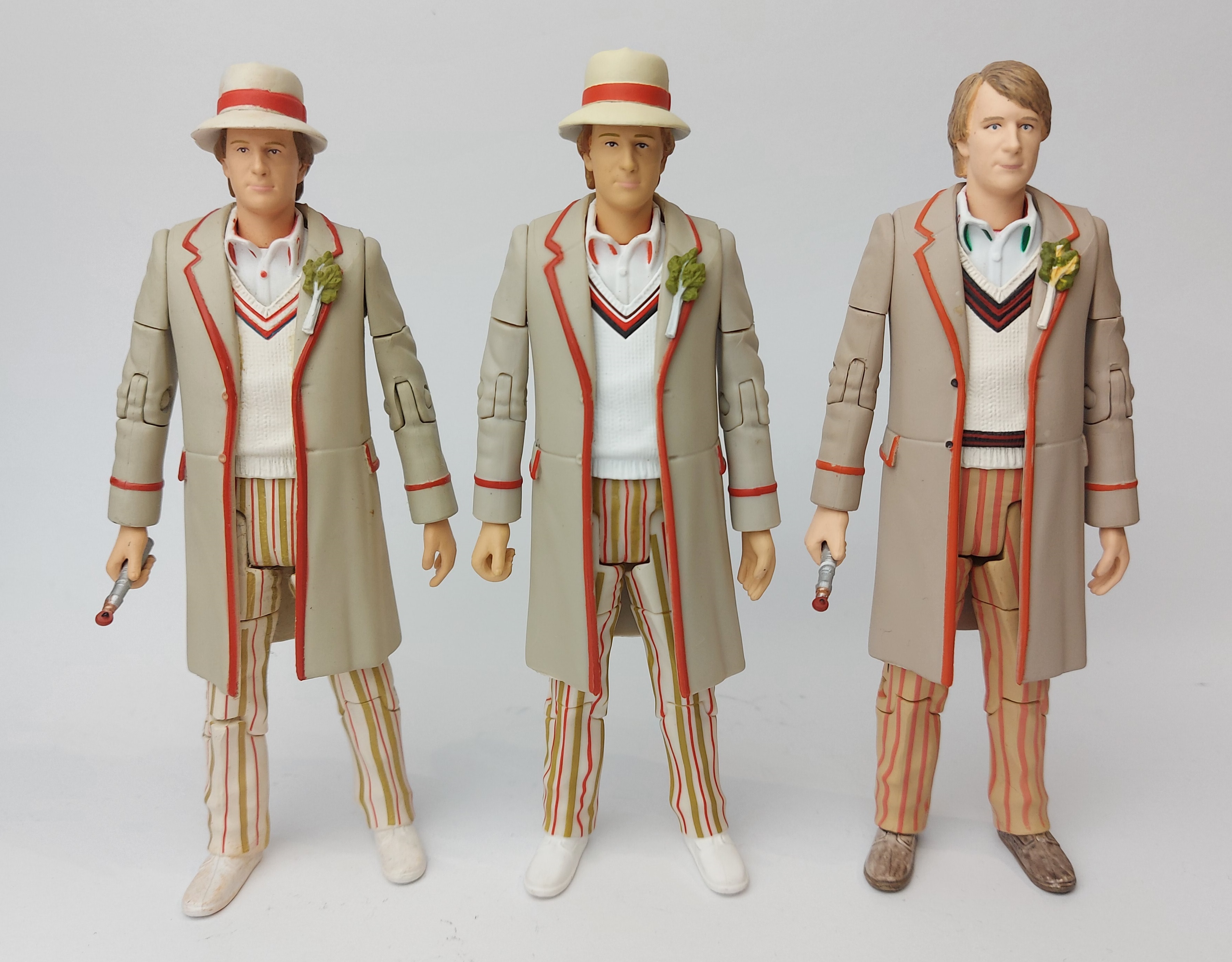 Next up is History of the Daleks 3: 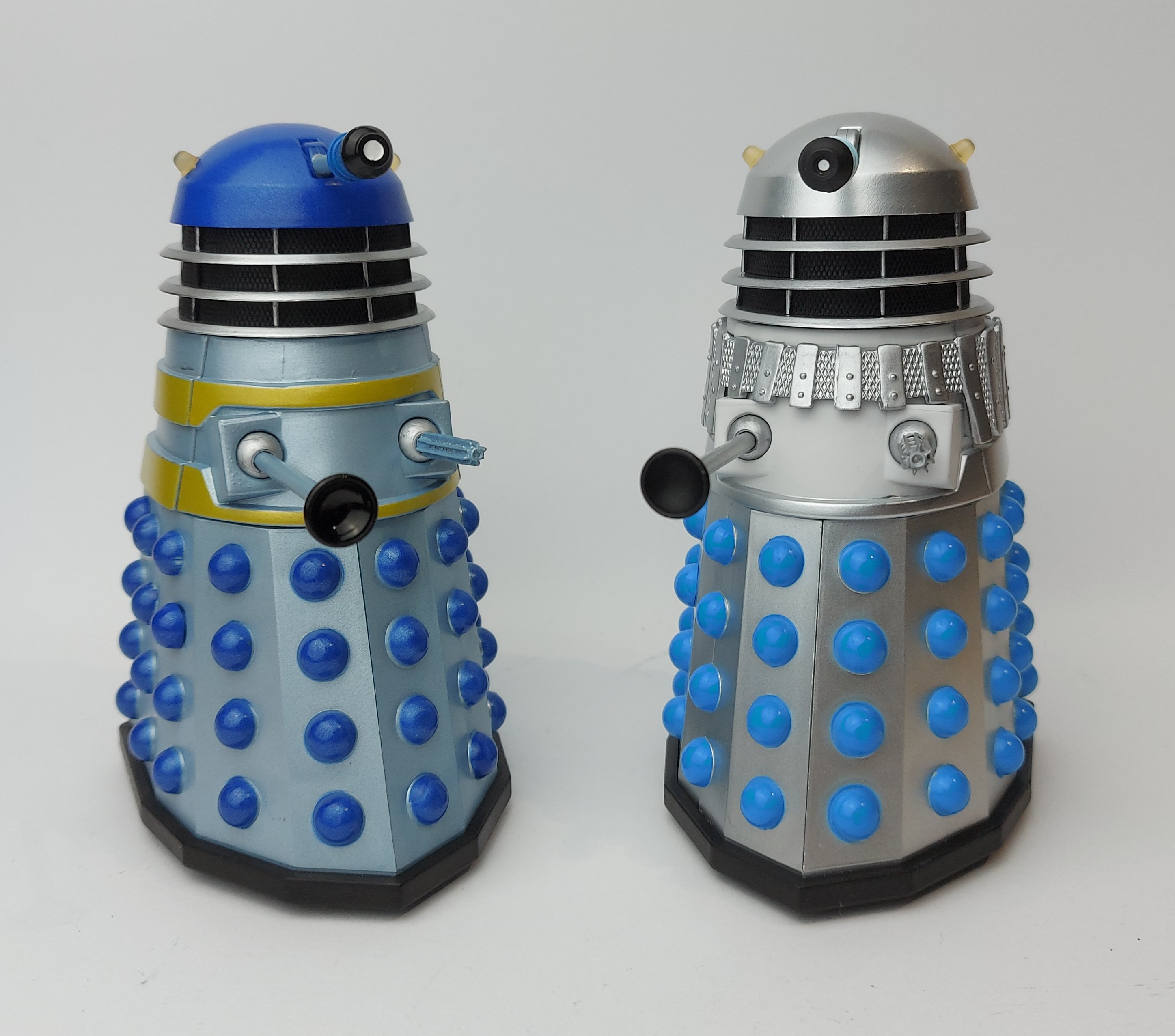 First up is the guard Dalek, which is now very similar in colour to the recent Mechanus Daleks which is great. The gun is also the "imperial" style seen on the Mechanus release. Not sure why the gun has been painted blue rather than silver on this one, it may actually be more accurate but i'm not sure. Definitely worth getting if you missed the original, plus if you want it without the base like it appeared on screen then it's much easier to remove given the lack of SFX. 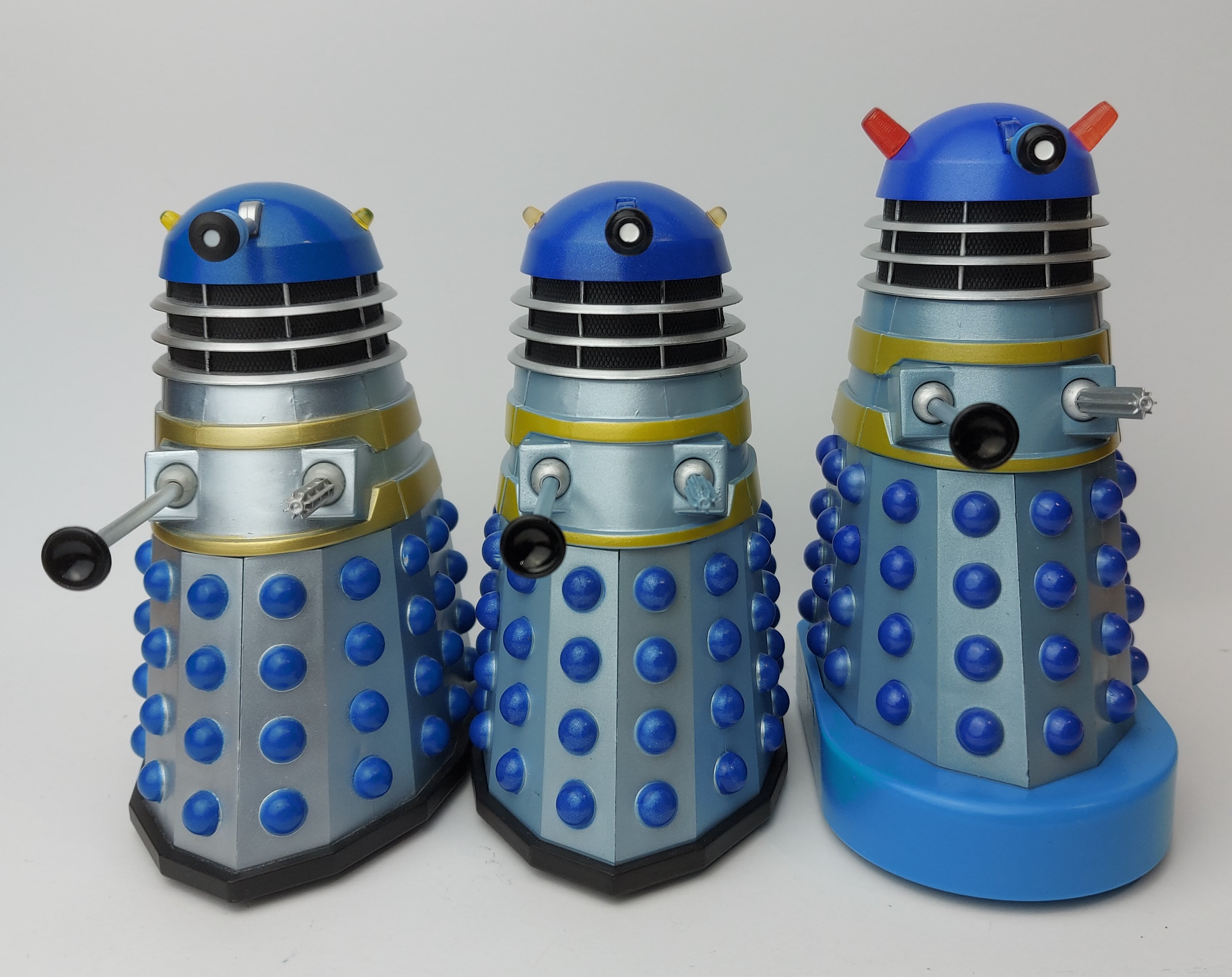 Next is the standard drone. I think I prefer the old grey for the midsections as it seems more accurate to me, but in hand I don't mind the new colour too much. The eyestalk rings also seem very pale on all the new Daleks. This one has the darker coloured hemispheres, close to the previous Troughton era Daleks, and he's also got a smaller pupil. While i'm not sold on the midsection colour it's definitely a really nice Dalek and a big improvement over previous versions, and i'd love to try and army build a few in the future. 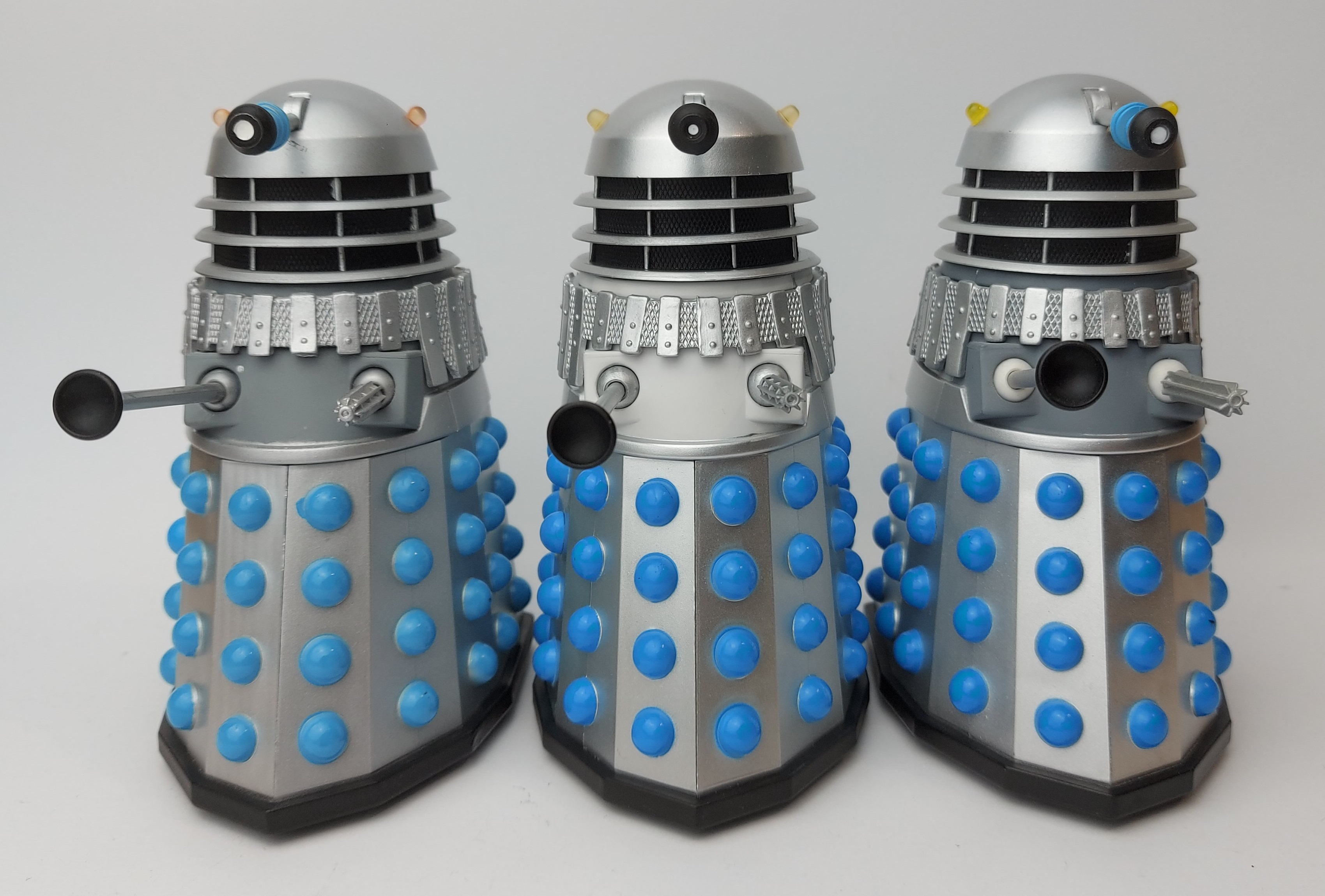 History of the Daleks 4: 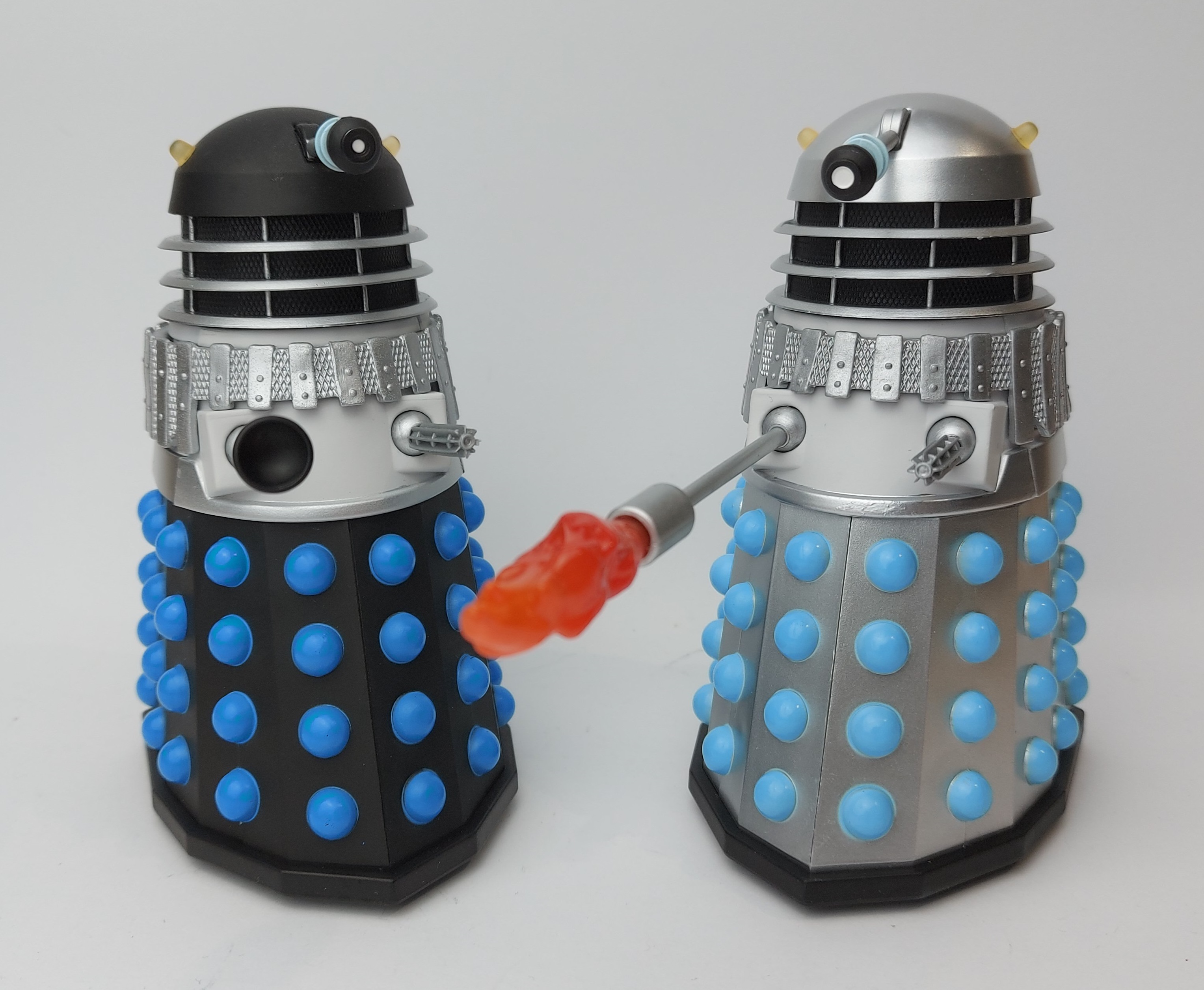 The supreme is really nice, very similar to the previous version but with the updated midsection and eye ring colours. It also has the smaller pupil and now only the eyestalk pivot is painted black. Definitely one to get if you didn't get the TRU one, and even if you did you can stick one with The Chase and one with Masterplan. 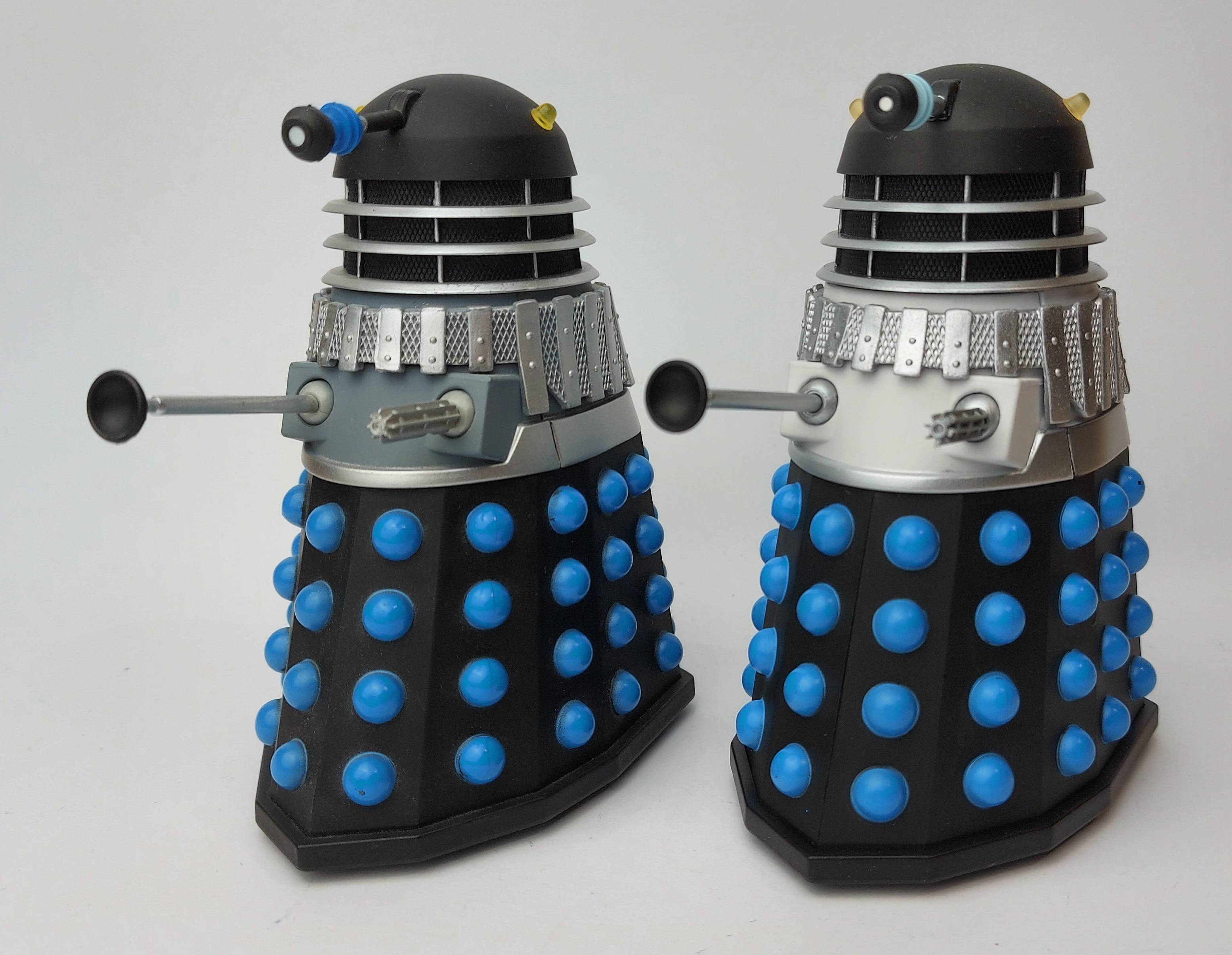 The flamethrower Dalek is pretty much the Chase drone but with a fully painted eye rather than the small pupil and hemispheres painted in a paler blue, pretty much like the Dead Planet Daleks (not sure if this is more accurate or not). The flamethrower seems much stiffer than the old one which was quite rubbery (no matter how much I straighten it mine always droops). 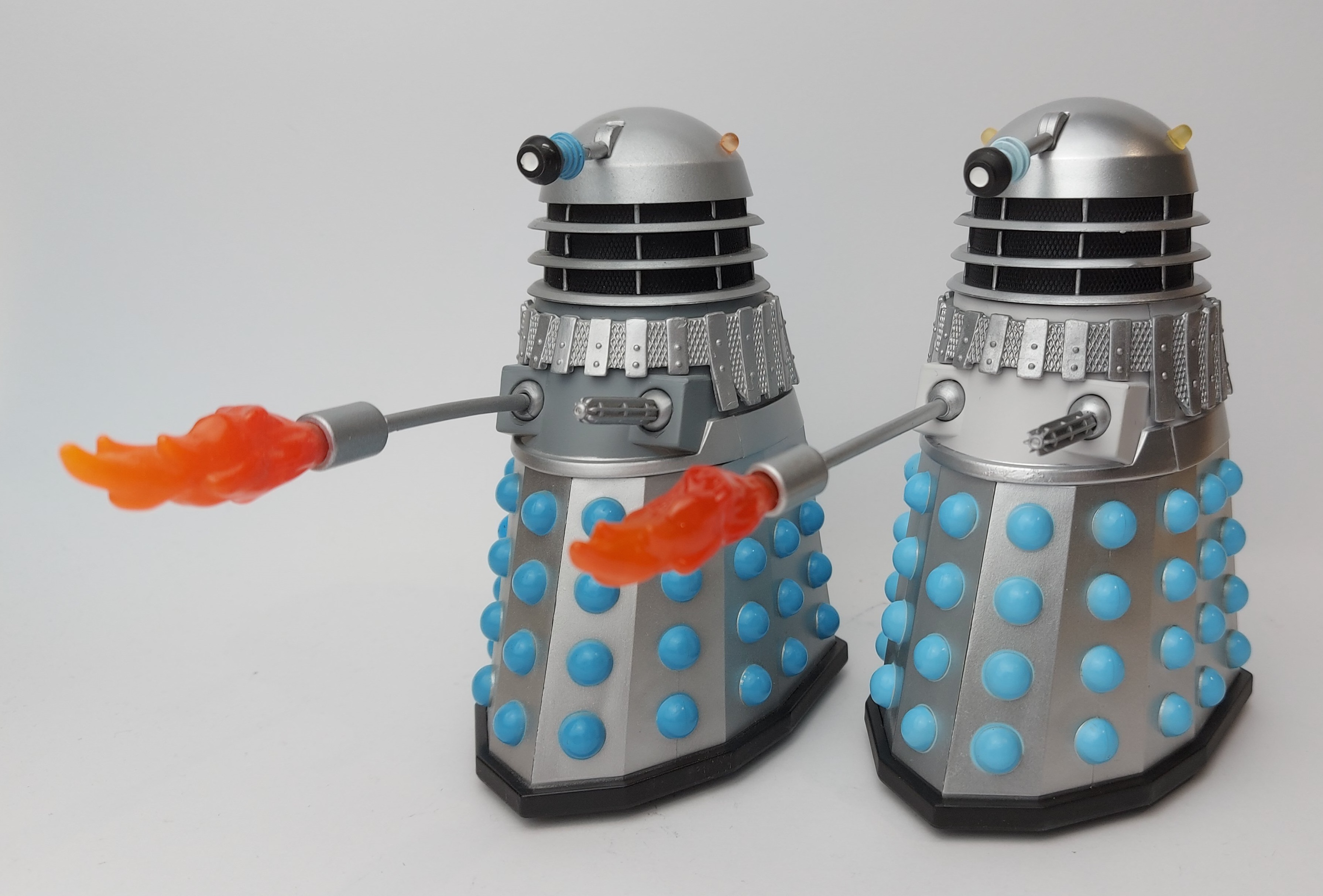 Moving onto the three packs with UNIT 1975 - Terror of the Zygons: 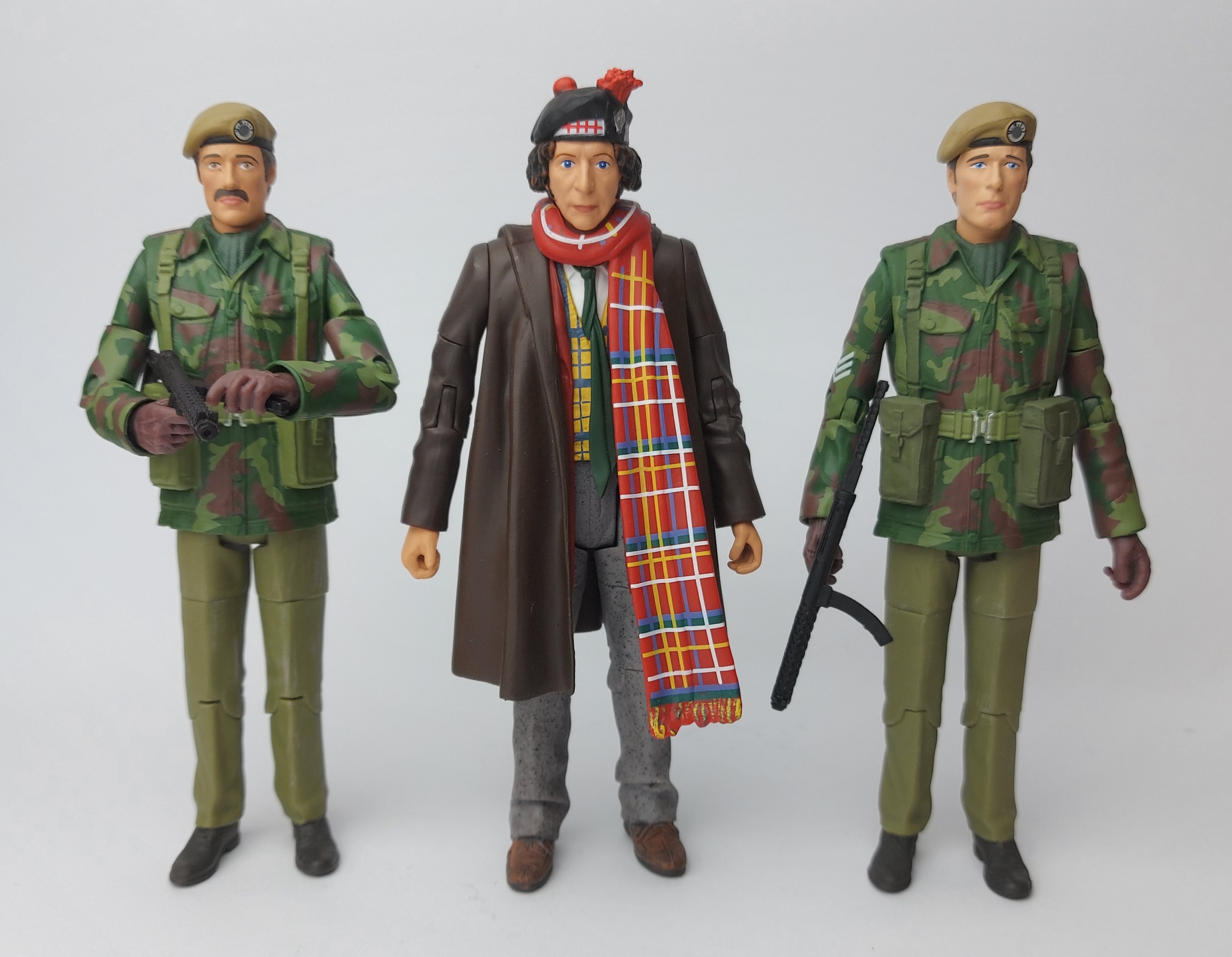 The mustache Yates face is definitely...interesting, but I think it works well enough, particularly as I think Yates' new head wasn't quite as good as Benton's anyway. The camo looks great and it's awesome to have the proper guns this time around. 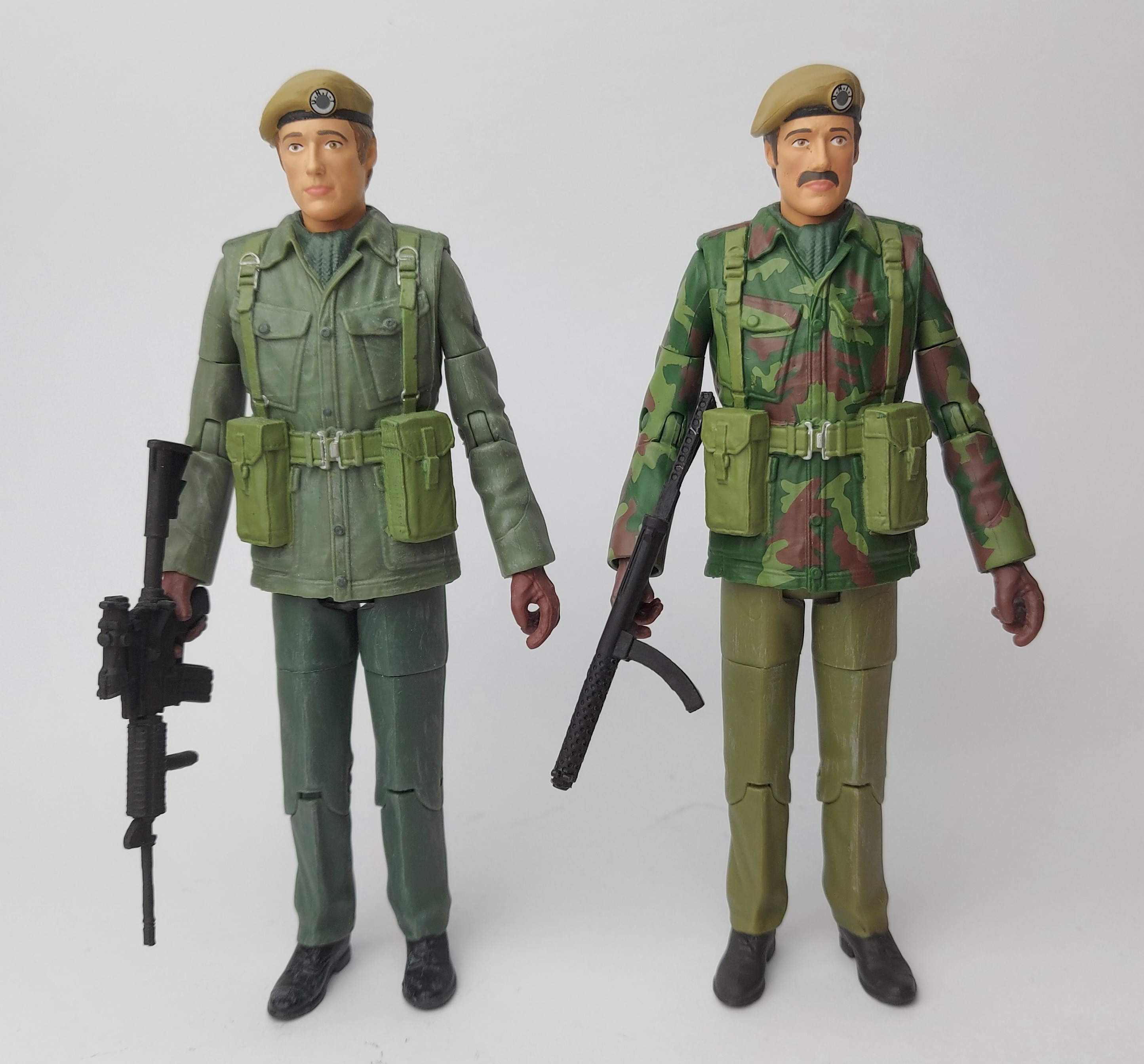 Benton is also really good, although he'd ranked up from sergeant at this point hadn't he? Are the arm markings correct for his rank at this point? I suppose if they're not you could always do a head swap with the grunt, as i'm pretty sure their heads are removable. 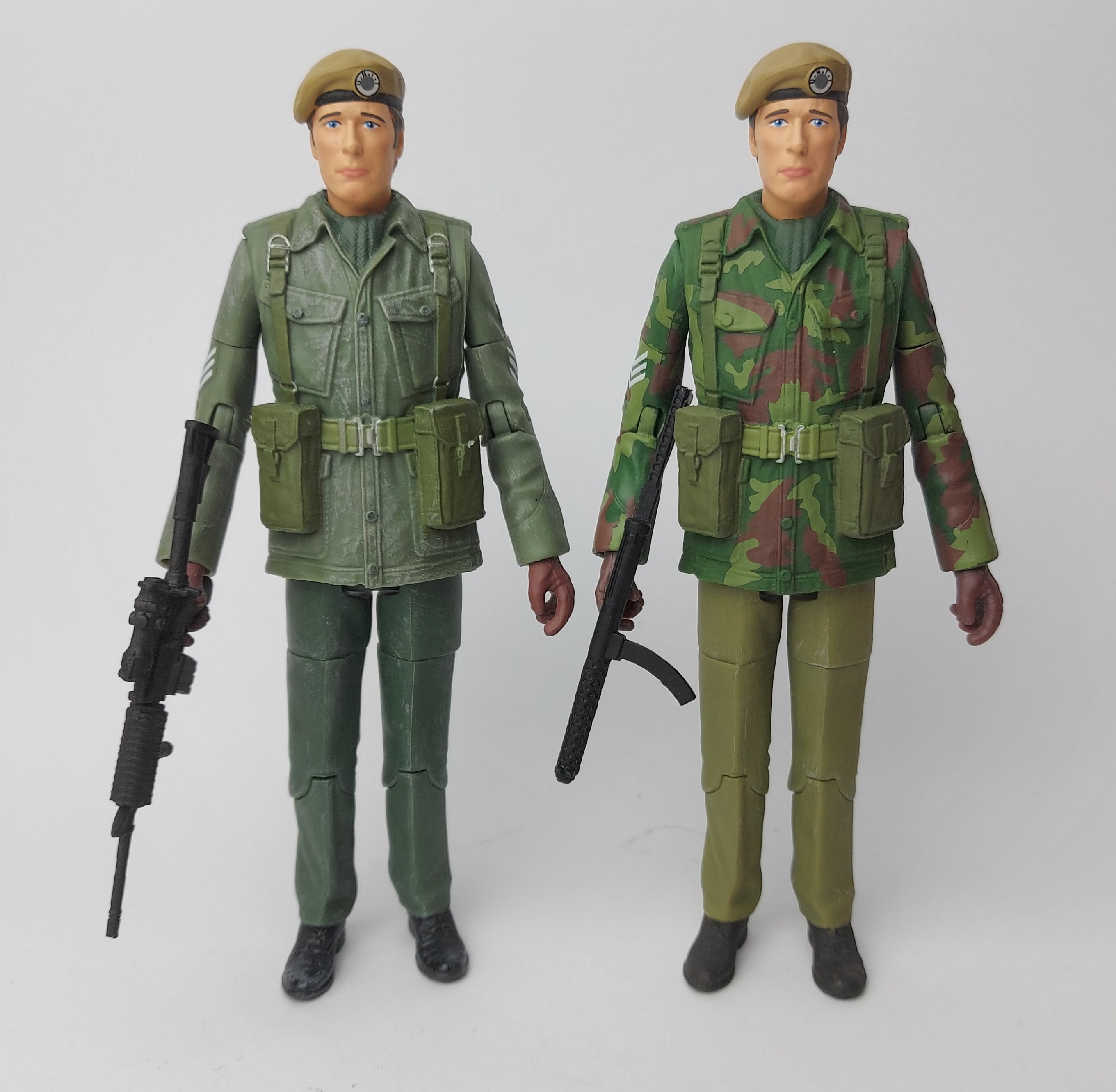 The trousers are speckled with black and brown which looks great, really looks like his actual trousers. Makes me wish the older figures with these trousers had this detail! Nice to see that the wasitcoat is correct, although with a bit less detail than previous versions. I don't think Tom actually wears any tie in that story, but I guess it's there because of re-use and it works well in green. The coat is a different shade to previous releases, slightly less reddish. The new scarf is good, although could perhaps benefit from a bit more tartan detail. I've seen a few complaints about the head but I think it looks really good, a much better likeness than previous versions, although you should definitely watch out for the eyes as I saw a few in the shop that were a bit off. Maybe they could do with being a bit less vibrant? Regardless I think this version of the Fourth Doctor is excellent, really adds to the story on the shelf.

(Pictured with the Sontaran Experiment release) 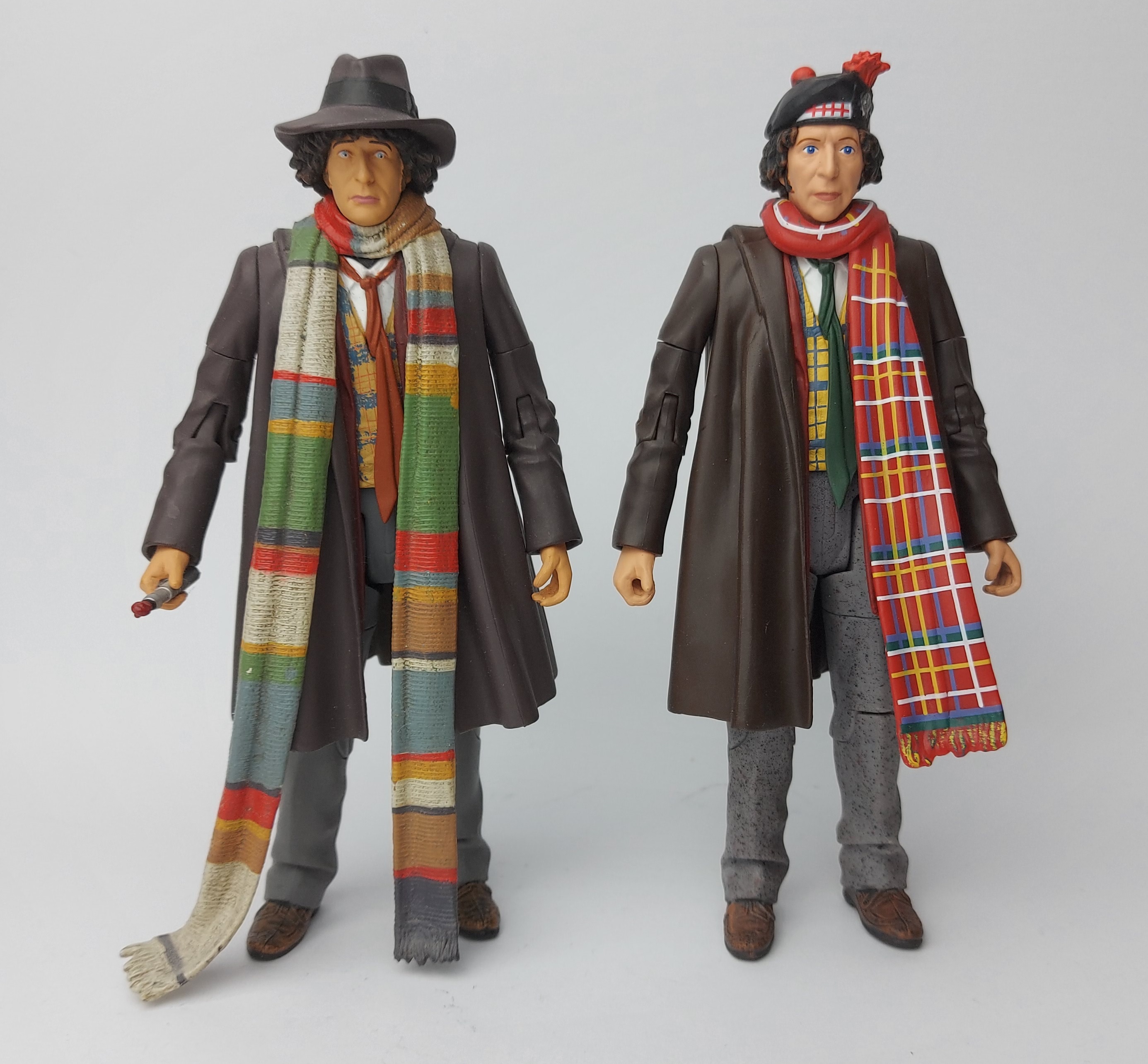 Next up are the Companions of the Third and Fourth Doctor: 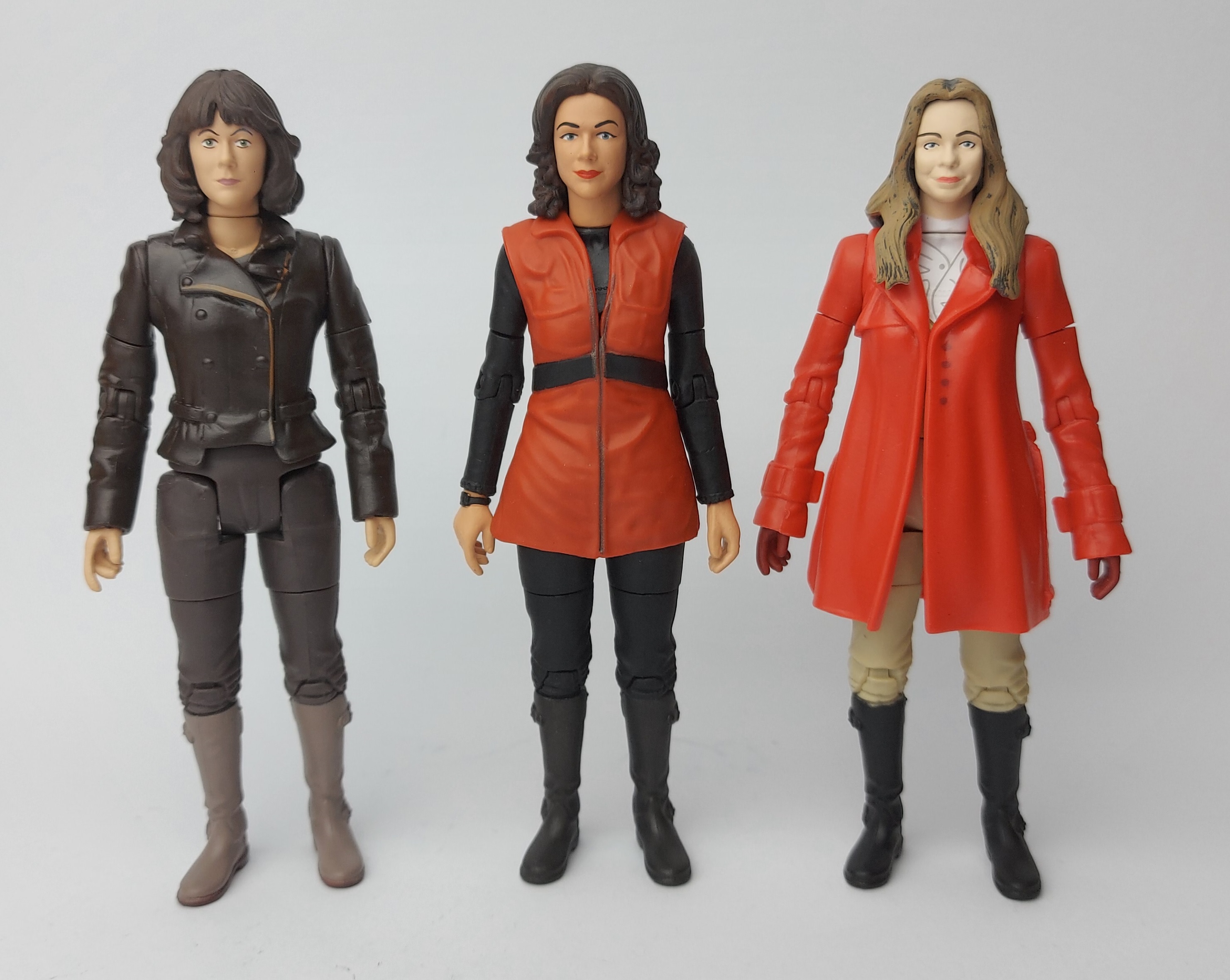 All the figures in this set use the SJA Sarah Jane legs with the boots. I really like this version of Sarah, although it's not fully accurate it's a good bit of re-use and it goes nicely with the recent Peladon Pertwee. 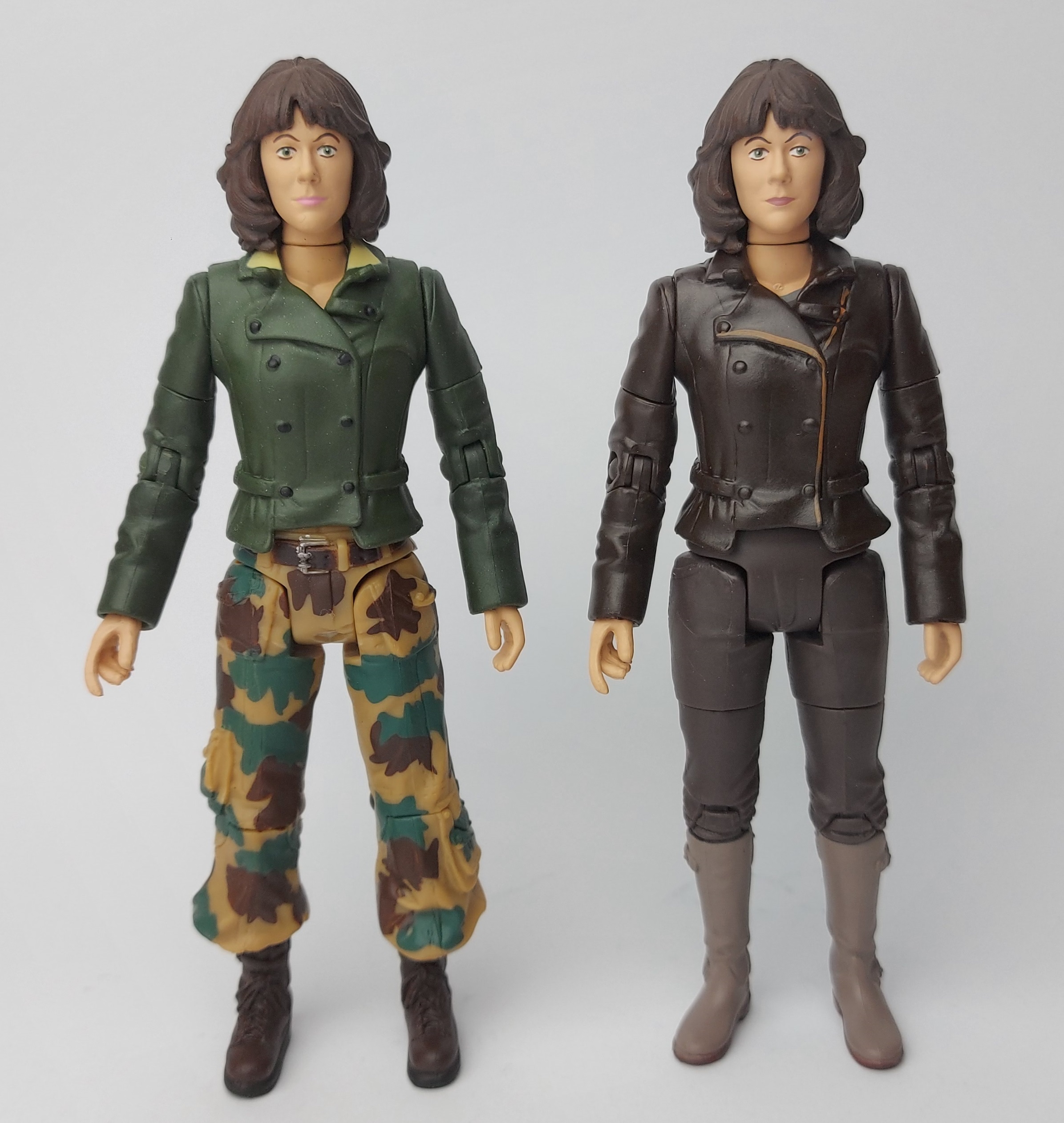 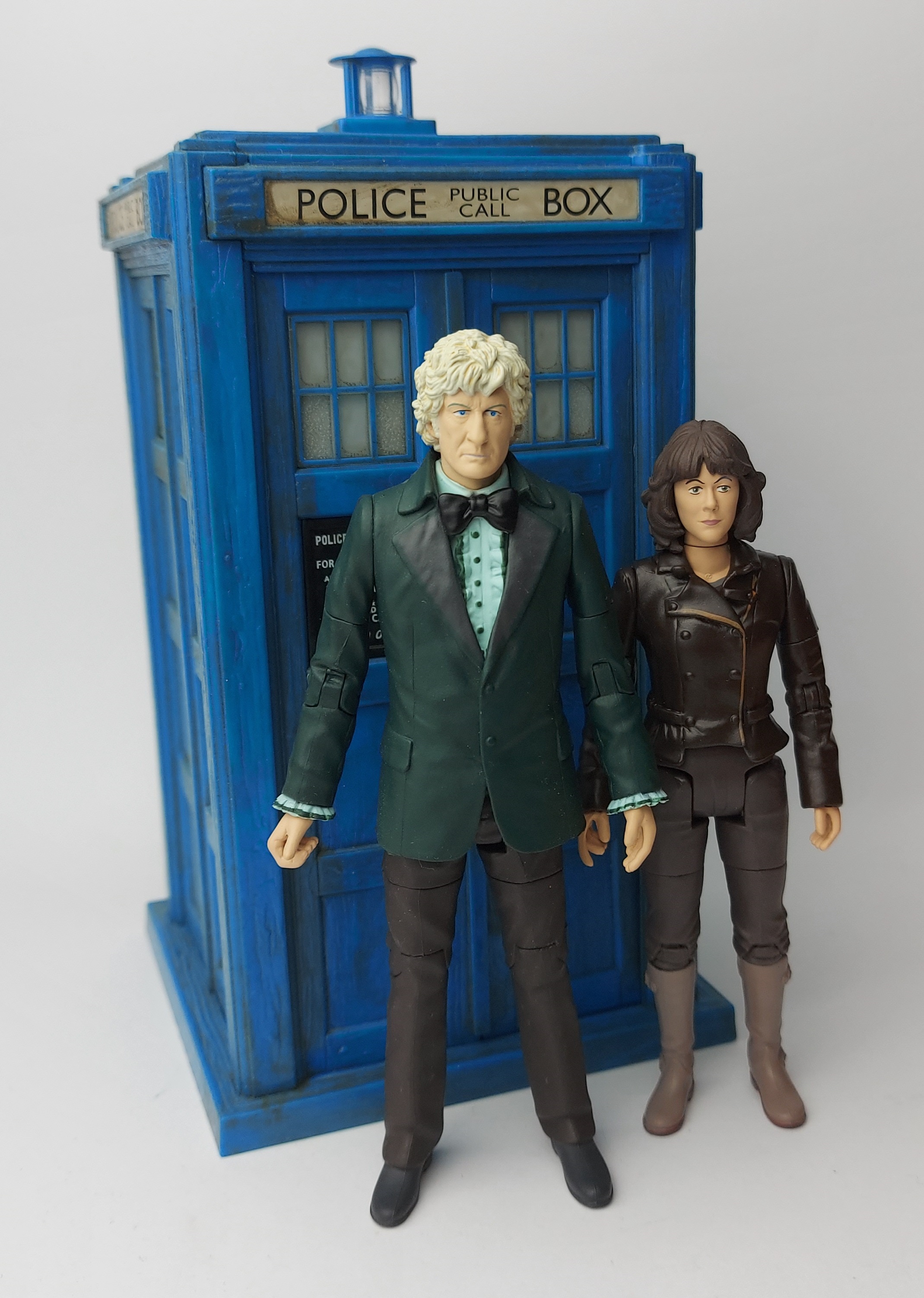 Romana 1 is definitely the best figure in the set, a massive improvement over the previous one. The body is from the red dress Sarah Jane from SJA, with the dress replaced with a new PVC piece for her outfit, which works really well. The head looks much better, the hair looks like a different sculpt as it seems to part in a different place and also sits lower on her head. The skin tone is also much improved. 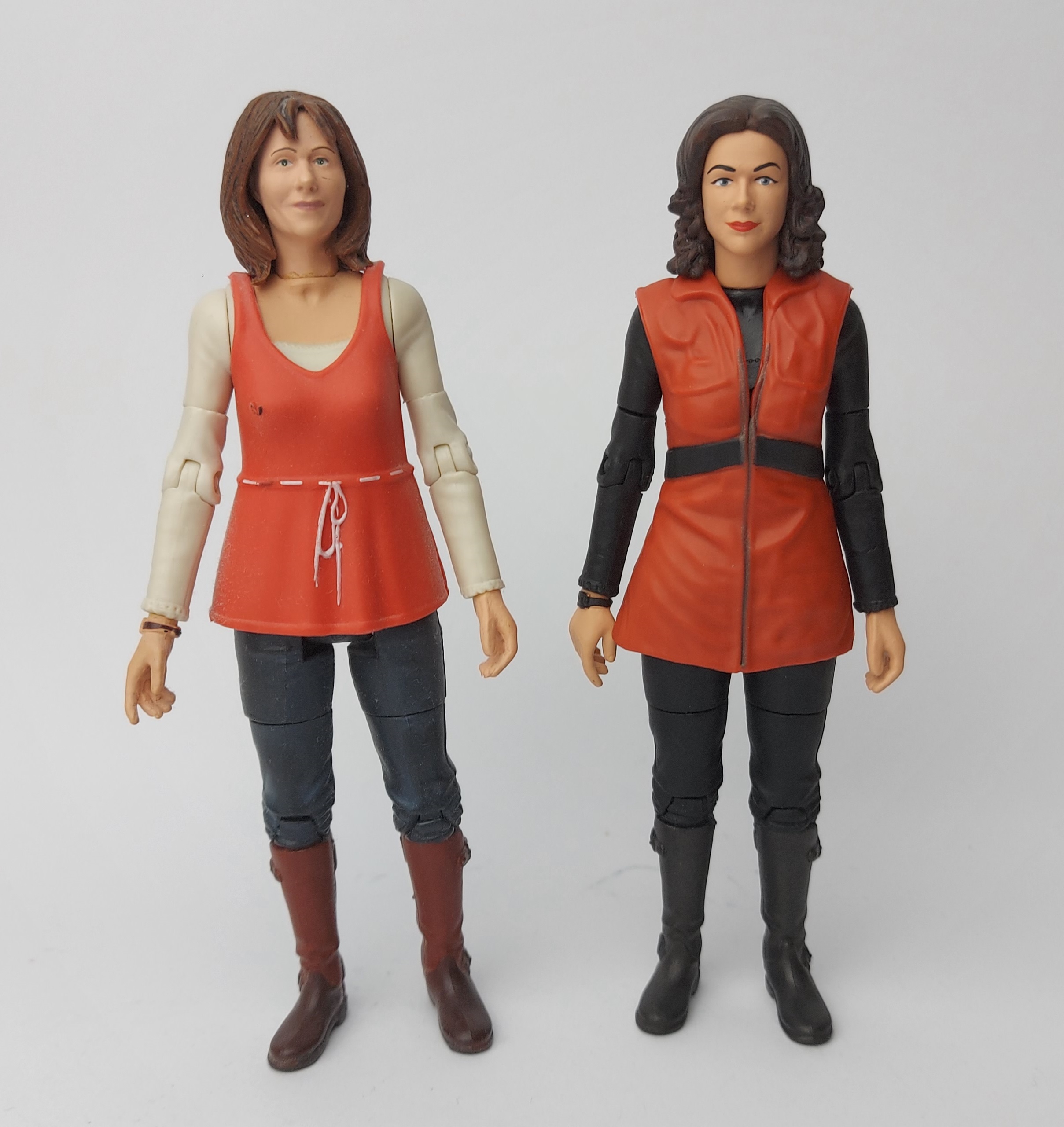 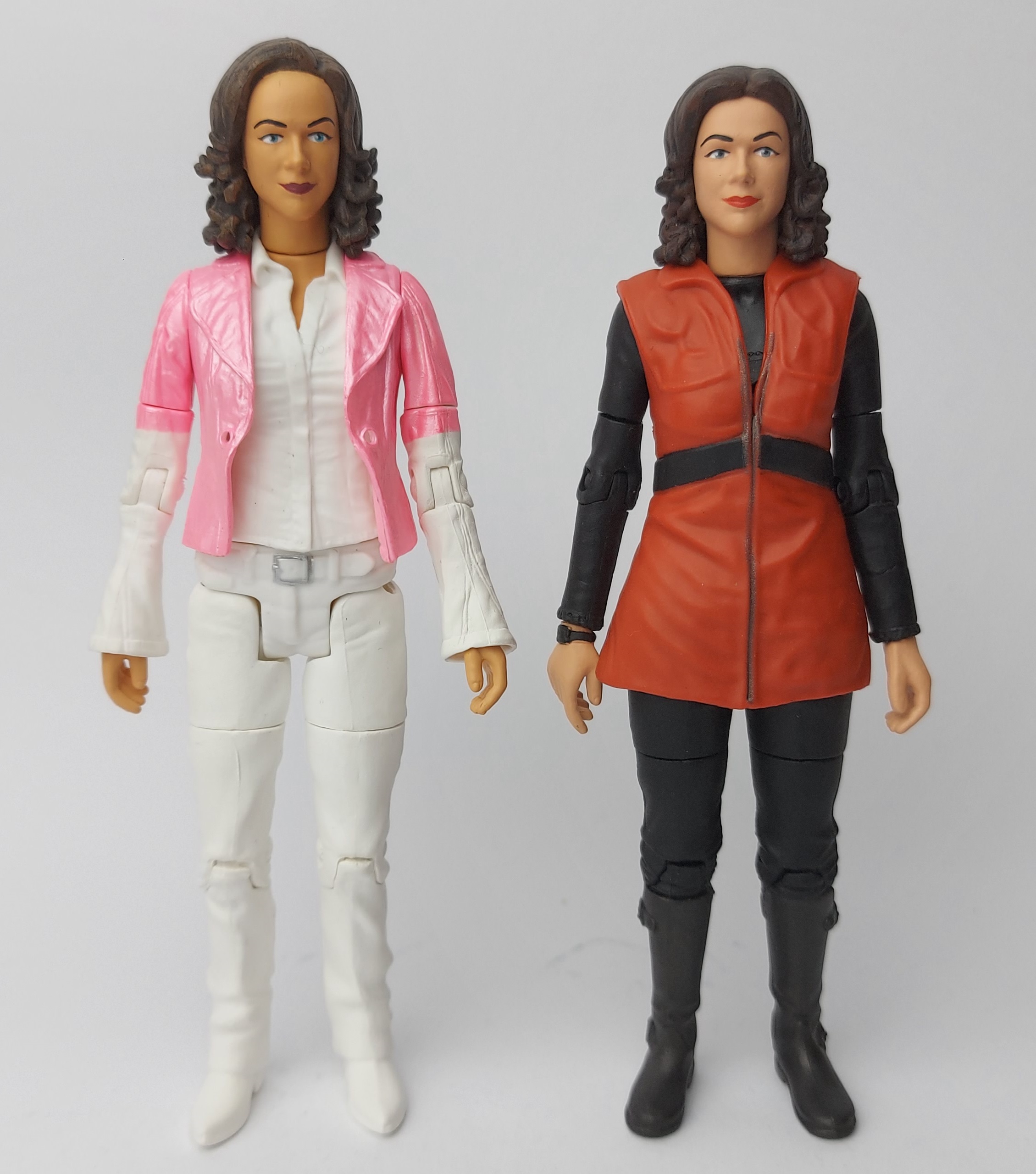 As many of us predicted, the next figure is Romana 2 from the Horns of Nimon. This is the same sculpt as the previous release (minus the scarf) but with the dress piece now removed. The waiscoat and shirt detail is painted on, which works decently well as it's largely obscured by the coat. 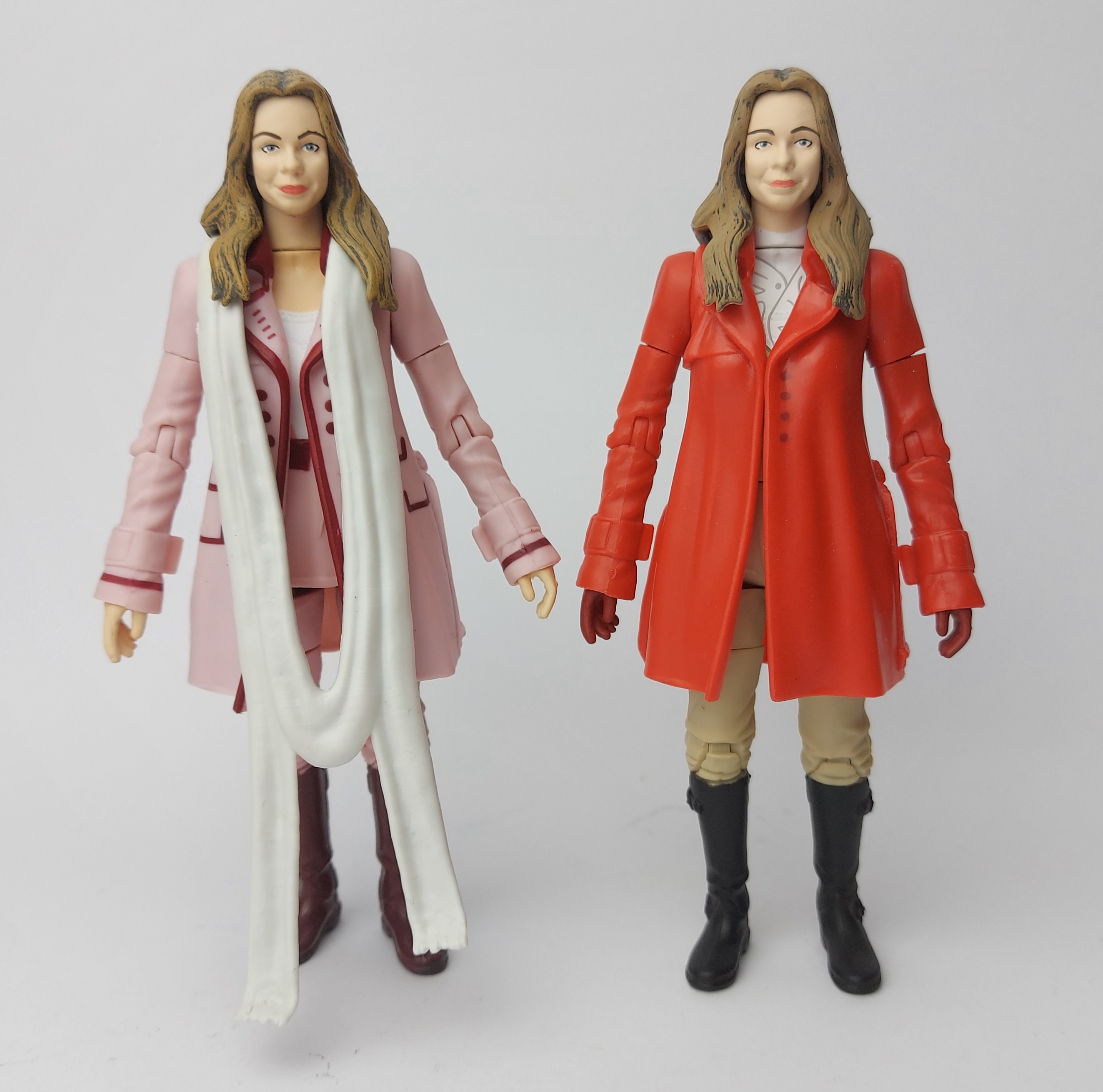 And finally the Friends of the Thirteenth Doctor set, with Yaz from Fugitive of the Judoon, Ryan from The Ghost Monument and Graham from It Takes You Away. These are all repaints but definitely effective ones, I wasn't expecting to find this set that interesting but actually they're really nice variants. I sort of wish Graham had a darker wash to his clothes like his original release but that's a pretty minor thing. 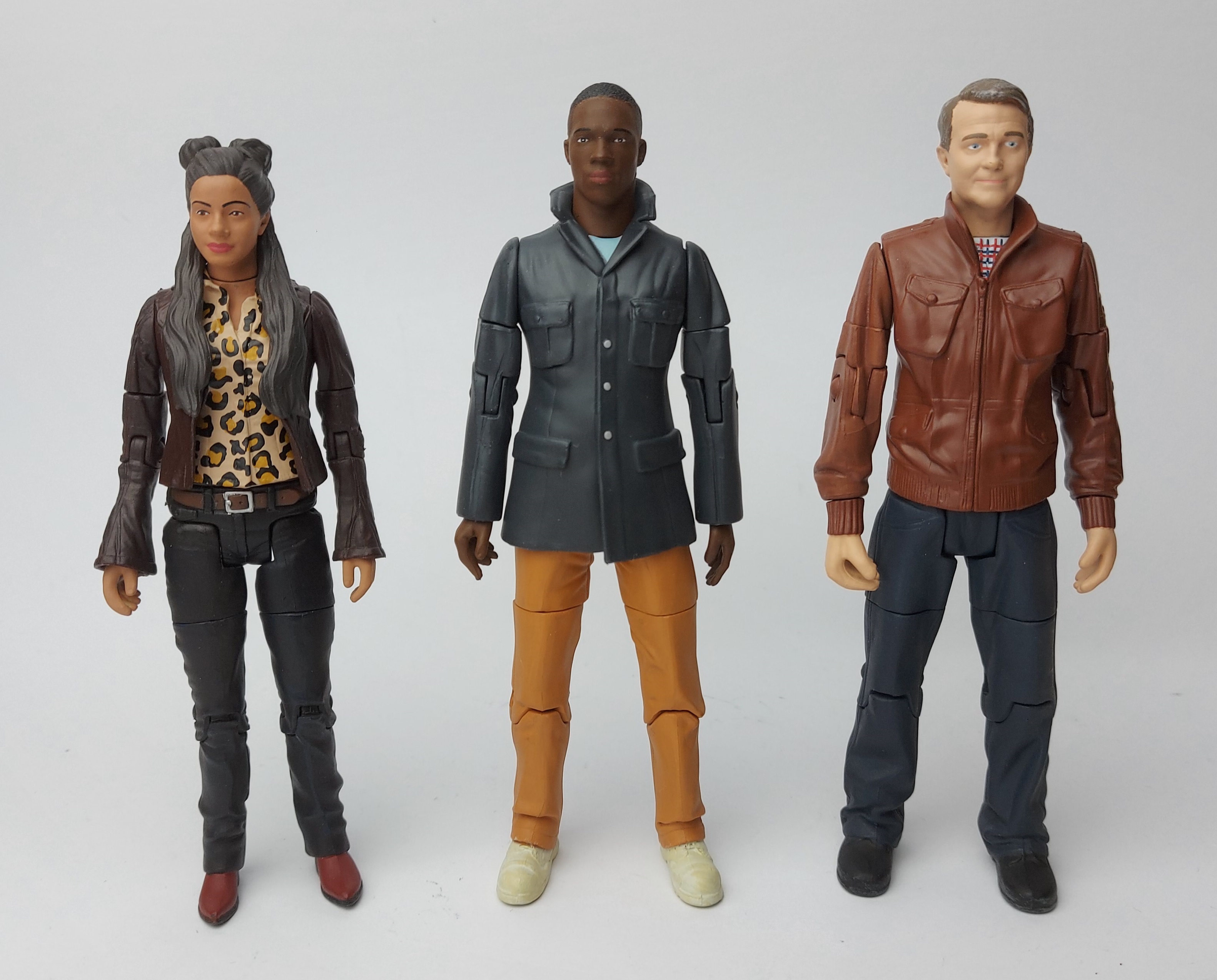 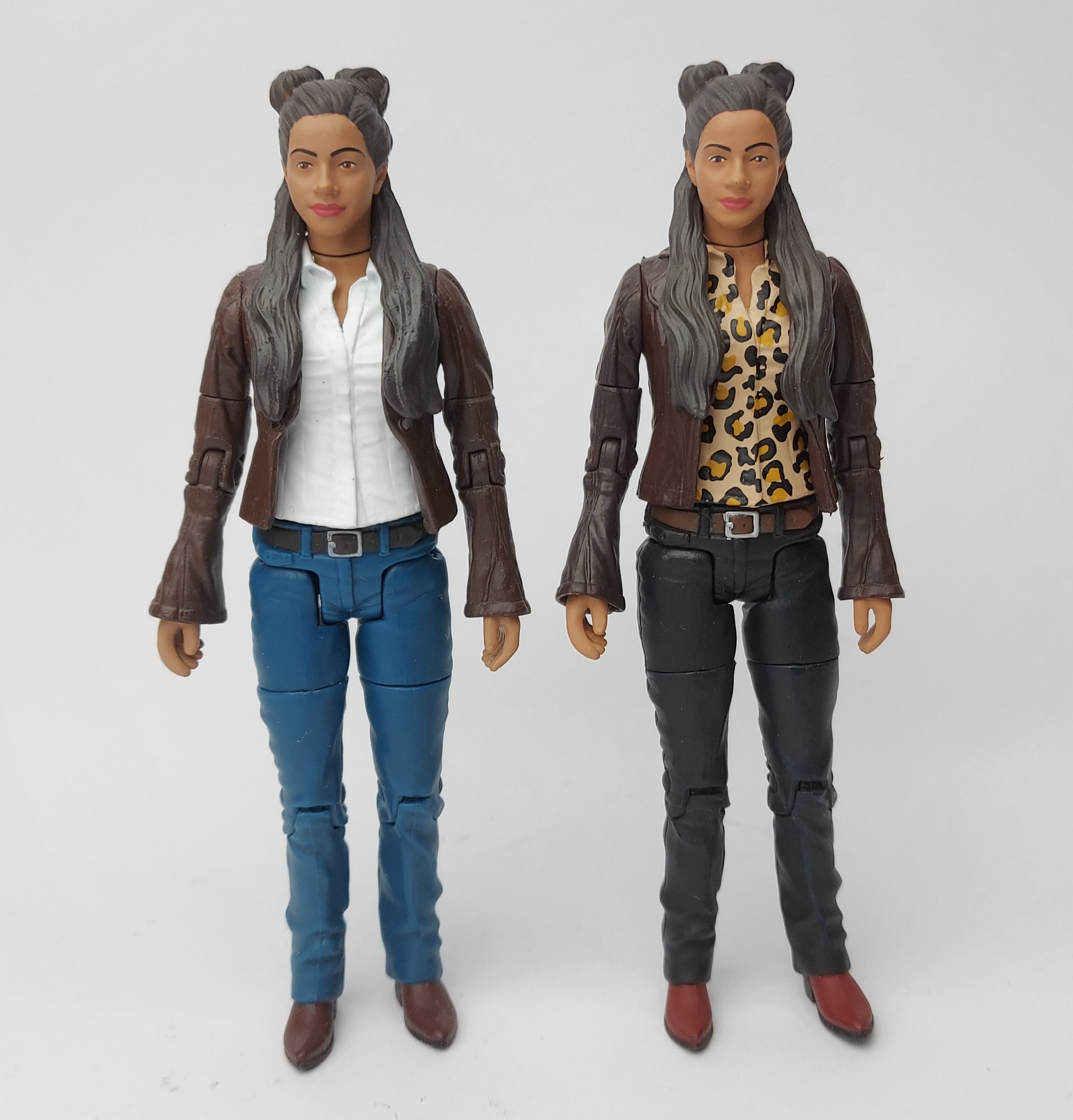 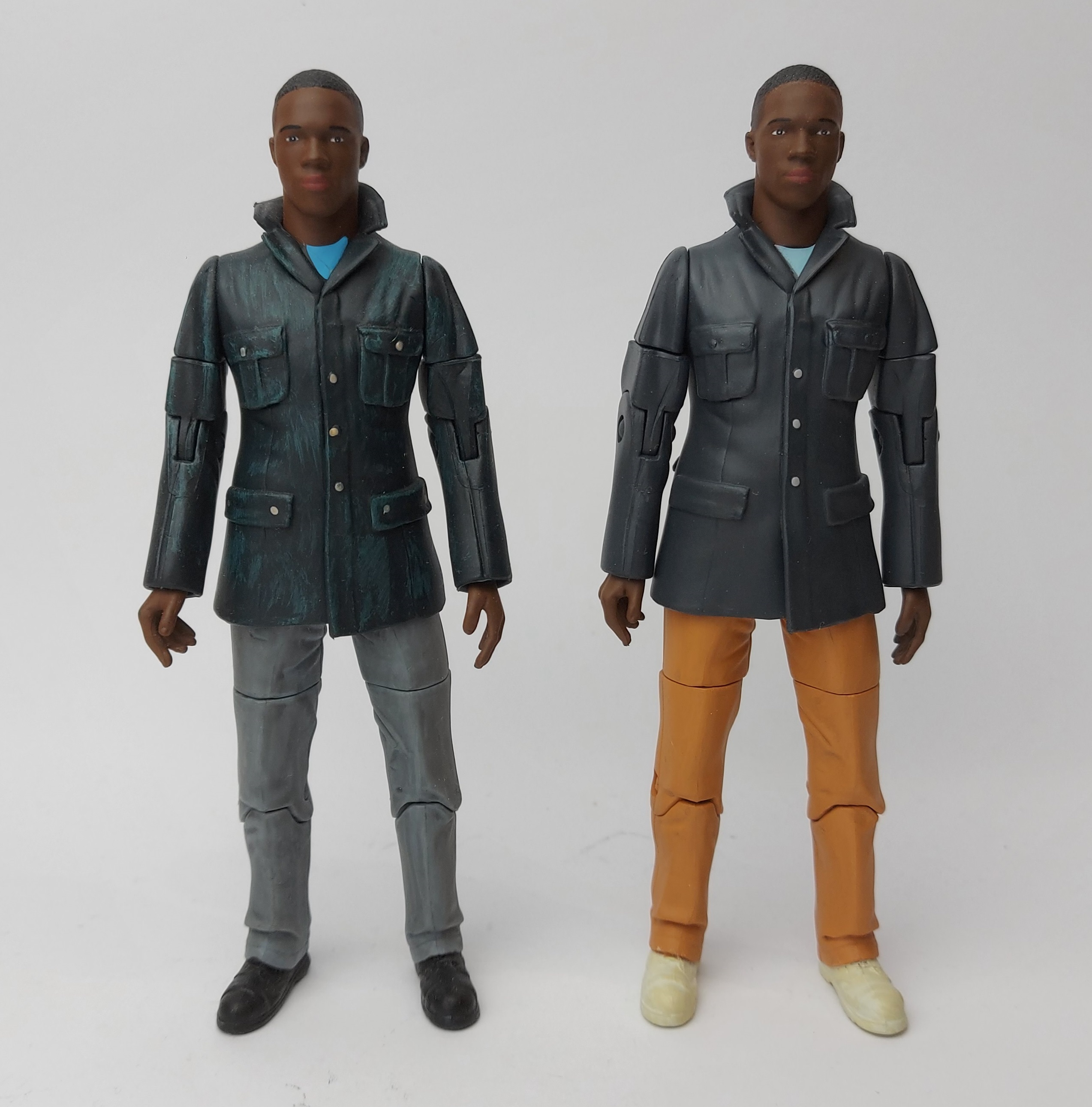 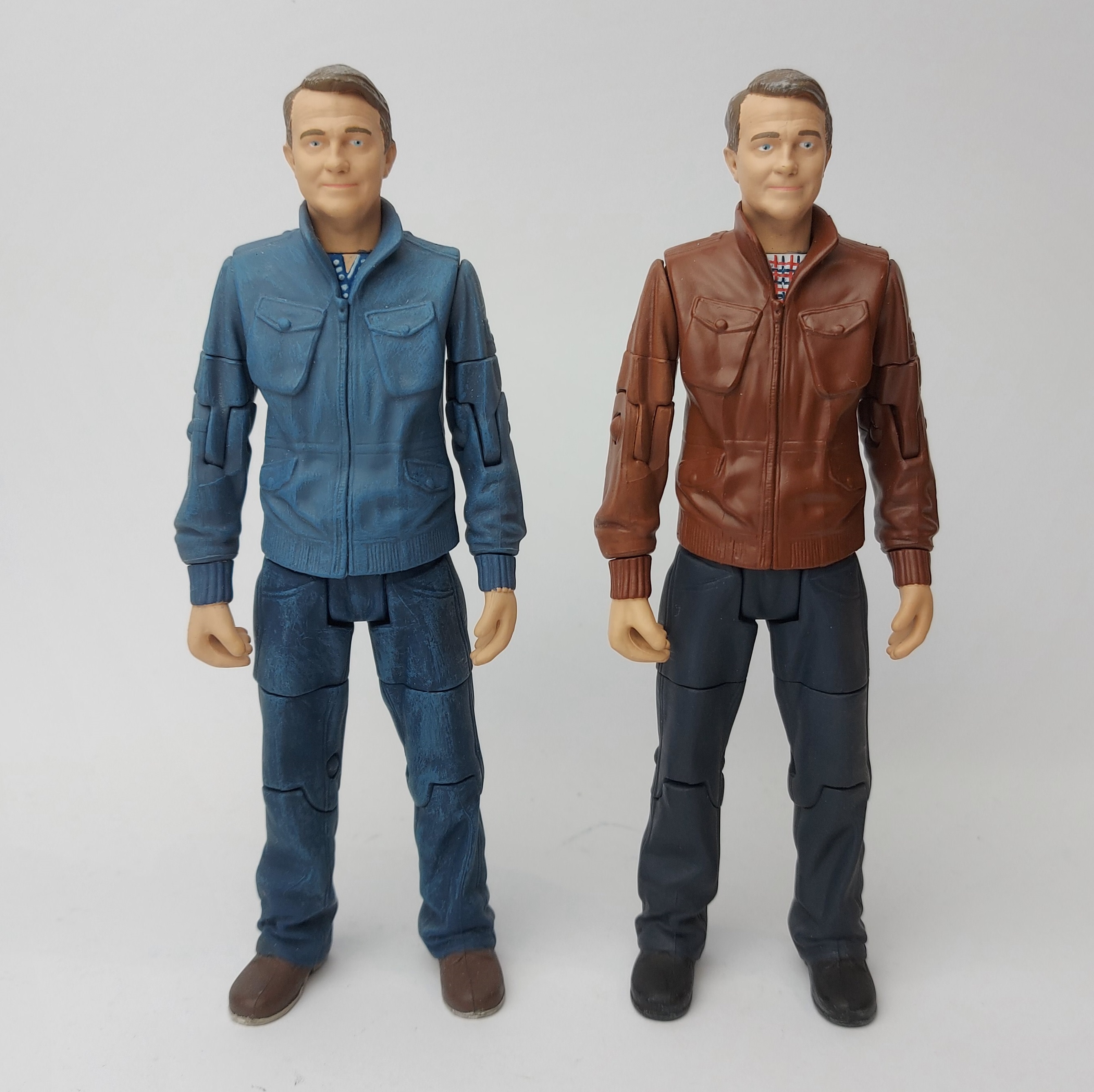 So overall a bunch of really good sets once again, massive thanks to Al and CO for once again getting some awesome figures out there!
Top

Wowowowow, some great pictures there, Doctor What. The chevrons should not be on Benton's sleeve, as you thought there, he's warrant officer by that point, WO1, he should have a small embroidered lion and unicorn crest ensignia on his sleeve. And TOm did have a dark green cravat on under his shirt in Zygons, but it was very subtle, you don't see it so much. I think having it out like that is probably the most sensible way to do the figure though.

I'm a little disappointed that the davison tardis is so close in colour to the androzani version, it was given a noticable repaint in s20, the s18-19 version is a more vibrant blue compared to the greyer blue from s20-23ish, then it seems to get progressively lighter through mccoy. Not sure if I can really justify getting it if it's so close to the one I have. We'll see.

Drove by 4 B&Ms today and didn''t look as they are not supposed to be out till Monday!!!

Now I've got to wait again as they were not local... Sometimes early can be as annoying as late!

Very interesting to see the differences between the old and new Romana 1 head sculpts - makes you wonder if the original head was intended for a different outfit, but there was some issue with getting it done in time (cost? production problem?) and what we got was a very hastily put together replacement.