Guess I'll add a topic to kick off this new section. Use this thread to post pictures of any miscellaneous Doctor Who toys you own that aren't part of the standard action figure lineup. I don't have that many, but: 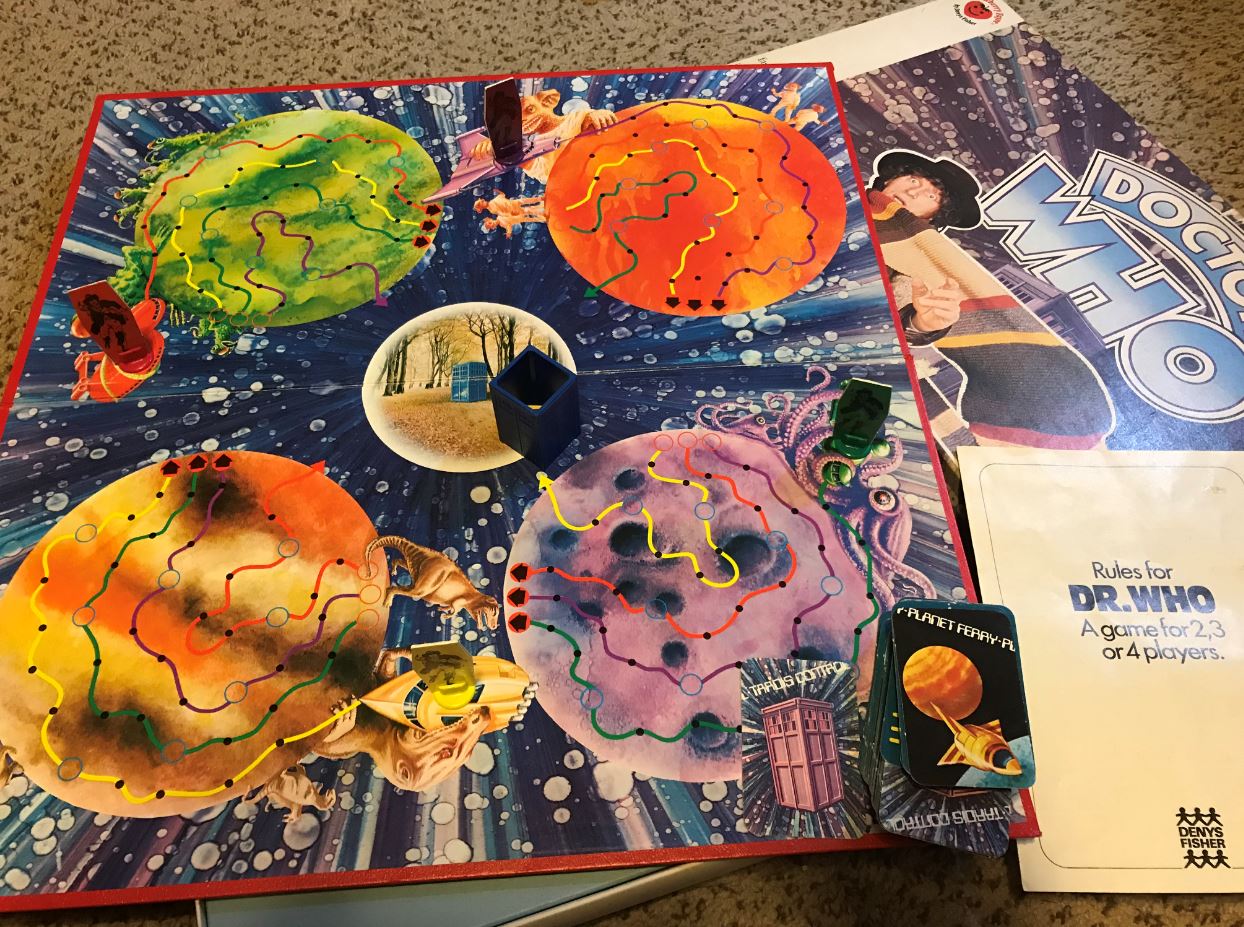 One of two Denys Fisher board games from the 70's, miraculously complete in the box. (The other being 'War of the Daleks' which is rather tricky to find intact these days since it has tiny plastic Daleks and a rotating internal dial mechanism that moved the Daleks back and forth along the board, both of which were prone to being lost and/or broken during play.)

Whoever did the artwork for this game apparently had the TARDIS described to them over then telephone by a blind man.

Strangely, three of the four spaceship-attacking monsters bear absolutely no resemblance to any known Doctor Who monster, but the dinosaurs on the yellow planet are clearly modeled off the terrible tyrannosaurus puppet from Invasion of the Dinosaurs, which is a very odd tie-in. I suppose the monsters on the red planet may possibly be Sea Devils, due to their head fins and netted mumus, but again... only if the artist had never seen an actual photo of the monsters and had them described to him over the telephone. Likewise, the purple octopi could be a badly described Kroll, but I have no idea what story the planet of the giant parrot-beaked tongue frogs is supposed to be from.

The game is set up a bit like Parcheesi, where up to 4 different players start off in alternate corners and move clockwise around the board, but everybody stays on their own "track". You draw cards which give you an option of moving X number of spaces, playing a "planet ferry" card (necessary to jump from each of the 4 planets), or a "TARDIS Control" card, which allows you to wrest control of the TARDIS away from another player.
The black dots are "monster encounter" spaces, where you must roll the dice to see what happens (usually forcing you to discard cards, go back spaces, sacrifice a TARDIS Control or Planet Ferry card, etc.) and the Blue circles are "safe" TARDIS circles that allow you to summon the TARDIS and move twice the normal number of spaces without having to roll for monster effects on the black dots, but while you're in the TARDIS, other players can play a TARDIS Control card to send you back up to 6 spaces, even onto the previous planet. It's not the most sophisticated game ever, but simple enough for children and adults to play. 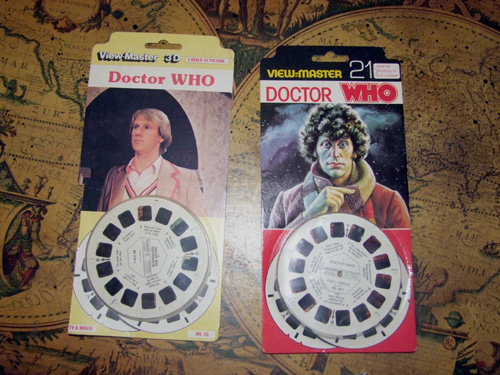 View master reels with images taken during the filming of Full Circle and Castrovalva.

And the obligatory collection of sonics (plus a few other misc "prop" items): 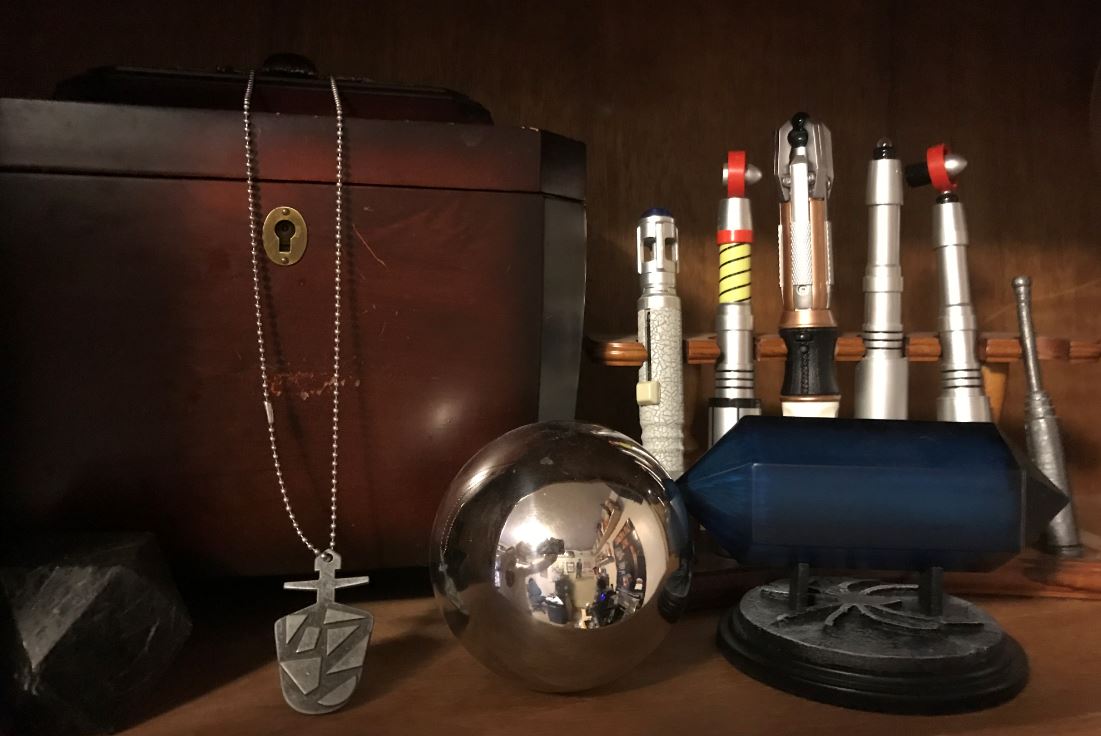 Ooh, I got an old doctor who board game recently, from the 1980s, I'll get a picture of that and put it up later. It's one of the strangest things.

Not mine, but the second rarest Doctor Who toy in existence (after the original Scorpion Automotive Dalek costume) is the "Dodge the Daleks" board game, clearly based (very loosely) around The Dalek Invasion of Earth. Both it and the Dalek costume came up for sale in the winter of 1964 shortly before Christmas, so I'd say they're tied in terms of being the oldest Doctor Who toy on the market. 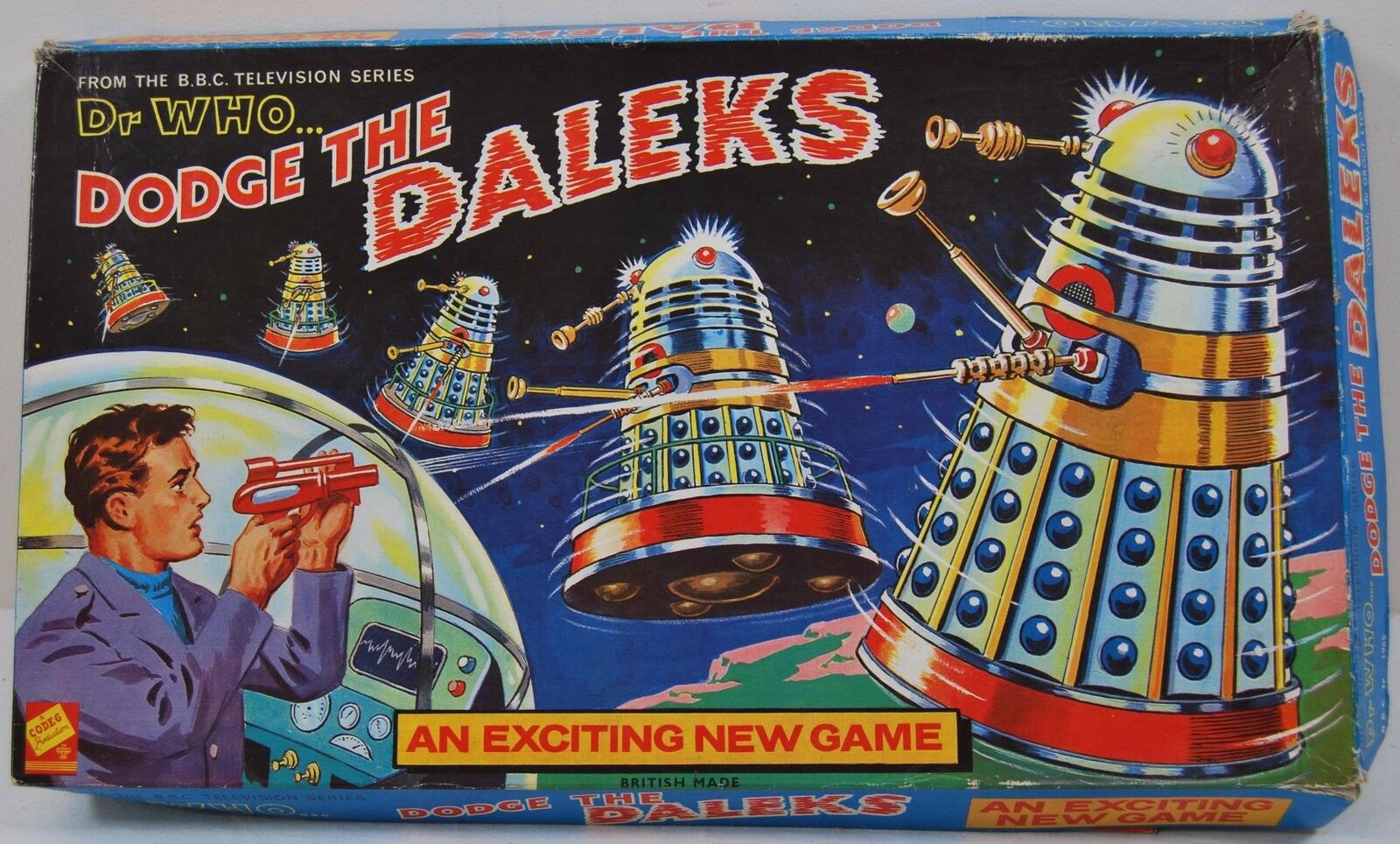 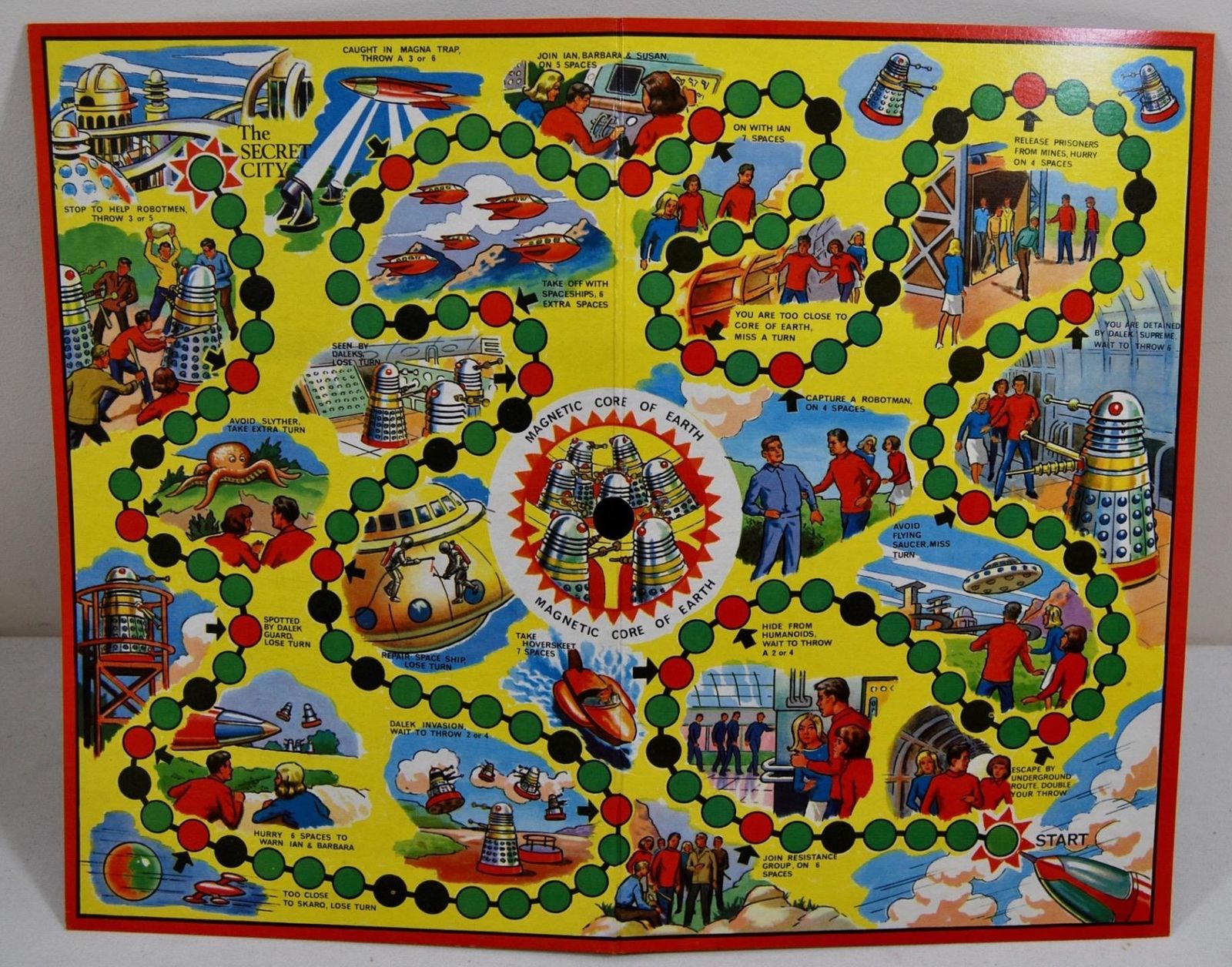 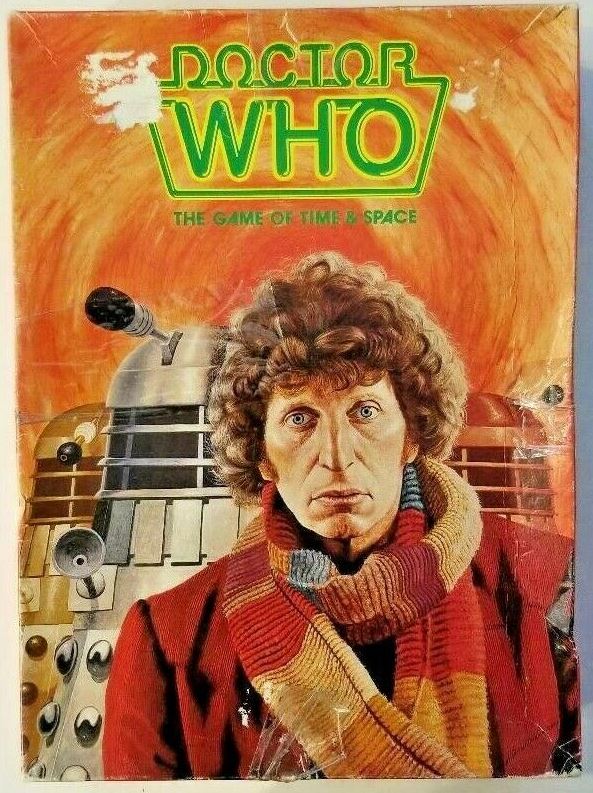 No, it's not that one, it's called "battle for the universe" it's sort of mccoy era. I don't think it's so rare, I've heard from a few other people who either have or have had it, but I read the rules and they're super complicated.

The box art is really gorgeous, but the cards that come with it are kind of hit and miss, things like daleks and cybermen and k9 all look about right, but any human character isn't even loosely based on the actor, it's really weird. 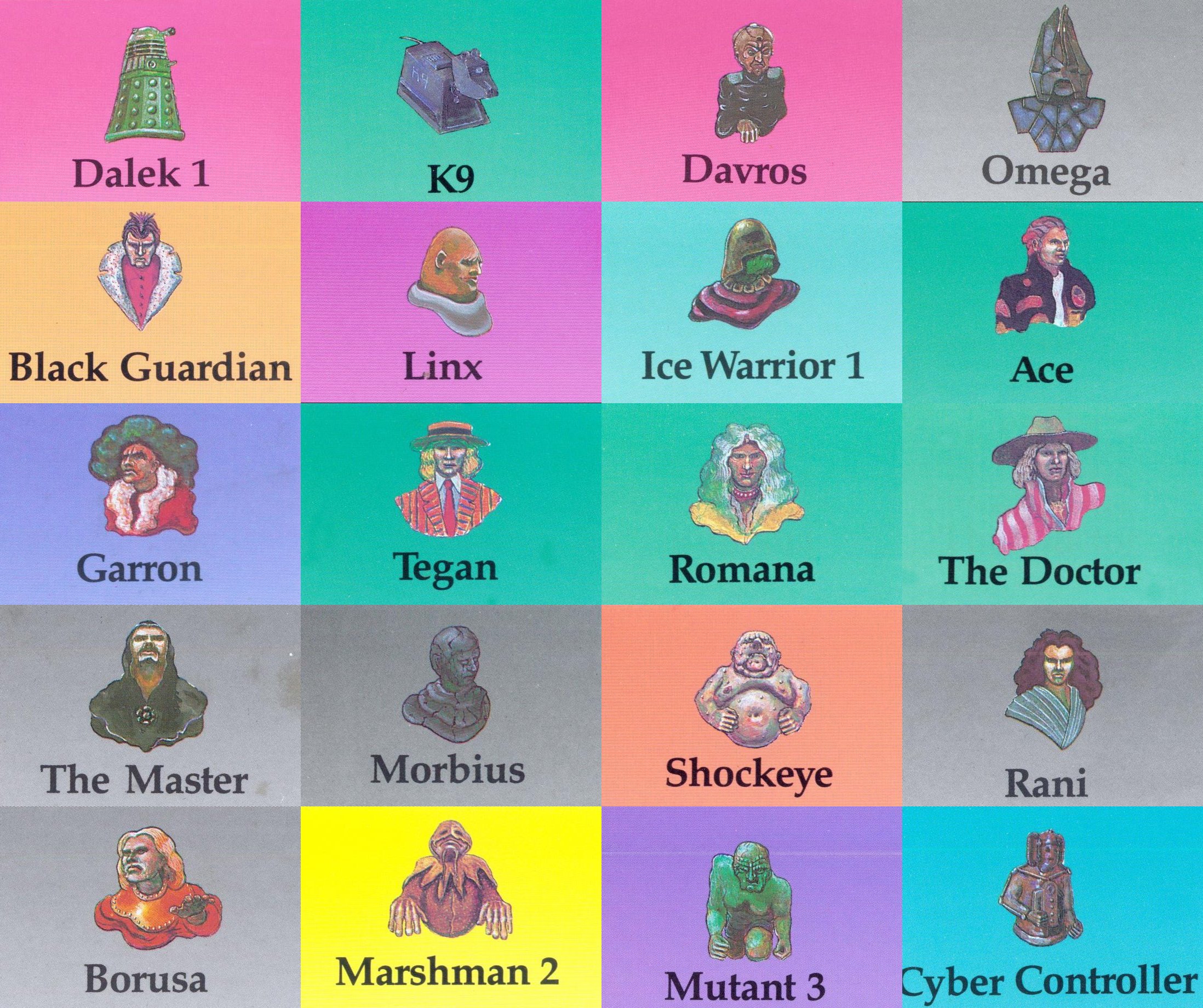 Shock eye and Garron really confuse me, I'm watching the Two Doctors right now and SHickeye is just a normal guy with funny eyebrows, not a fat rock troll thing. And Garron I had to look up he's the balding con artist from the ribos operation, looks a bit like tim mcinnerny, not at all like whatever the guy on his card is meant to be. All the human characters look more or less like the same face, so I kind of wonder if that's the artis putting their own face in there.

What the heck is going on with Tegan? Why does Shockeye look like that? Why is the Cyber Controller just a rusty looking Cyberman? What's with that generic mutant? Why does Borusa look nothing like any Borusa? Why is Morbius represented by his bust? I have so many questions...
Top

These are all the exact same questions I had when I got it. And yet Omega and Linx look great. I wondered if the mutant was one of the guys from colony in space, but they're not mutants. If he's meant to be a mutant from the mutants then he looks nothing like those guys. Also Romana kind of looks like Benedict Cumberbatch.

whats the thingy on the end of the sonics row?
Top
Post Reply
177 posts

Return to “Doctor Who Toys”