As i'm stuck inside for a while, I thought i'd dig out some of my old custom Daleks and give them a clean up! 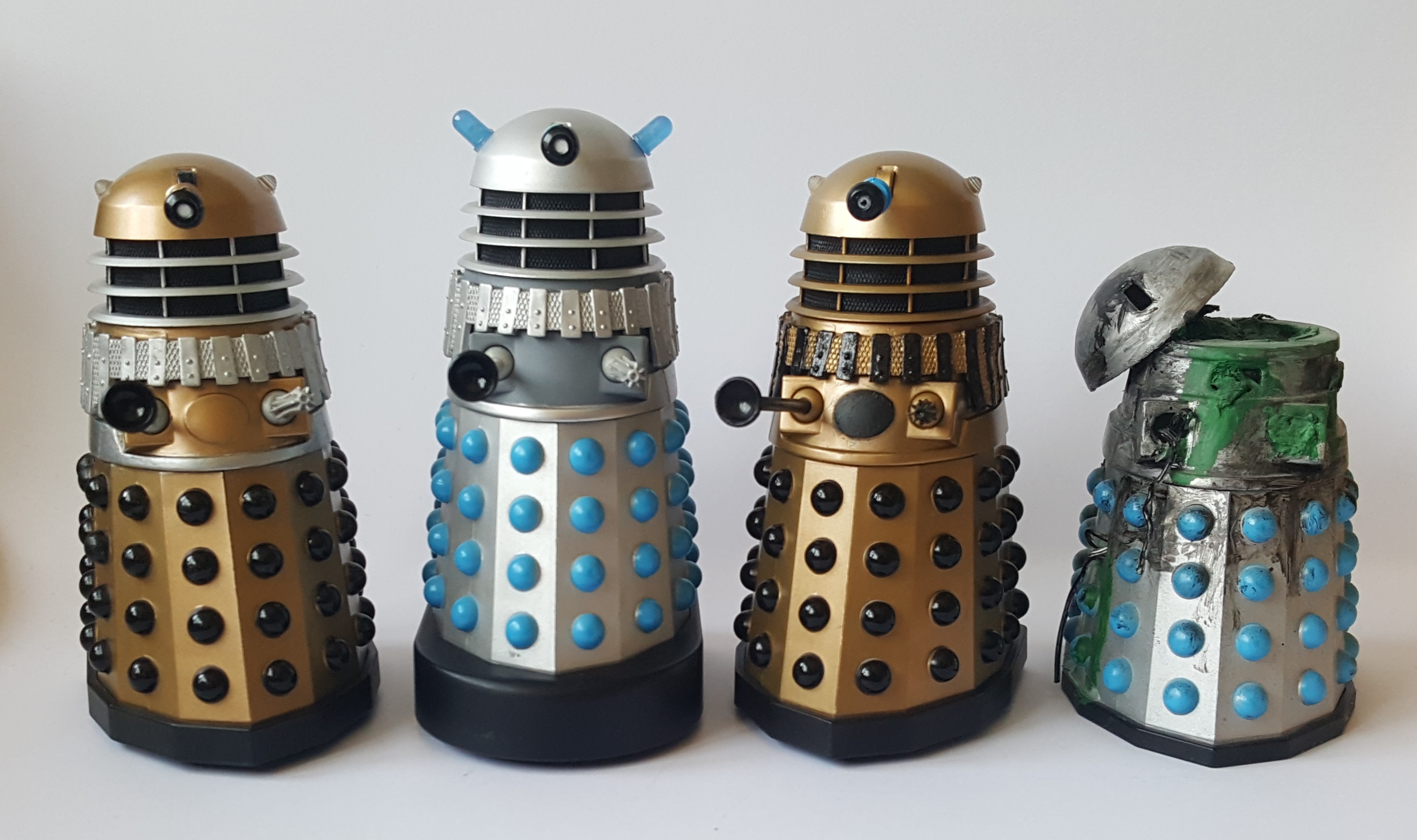 First, an Invasion Earth movie Dalek, made with an Evil of the Daleks guard with the big saucer pilot base, his head painted silver and his lights replaced with 5mm blue LEDs. 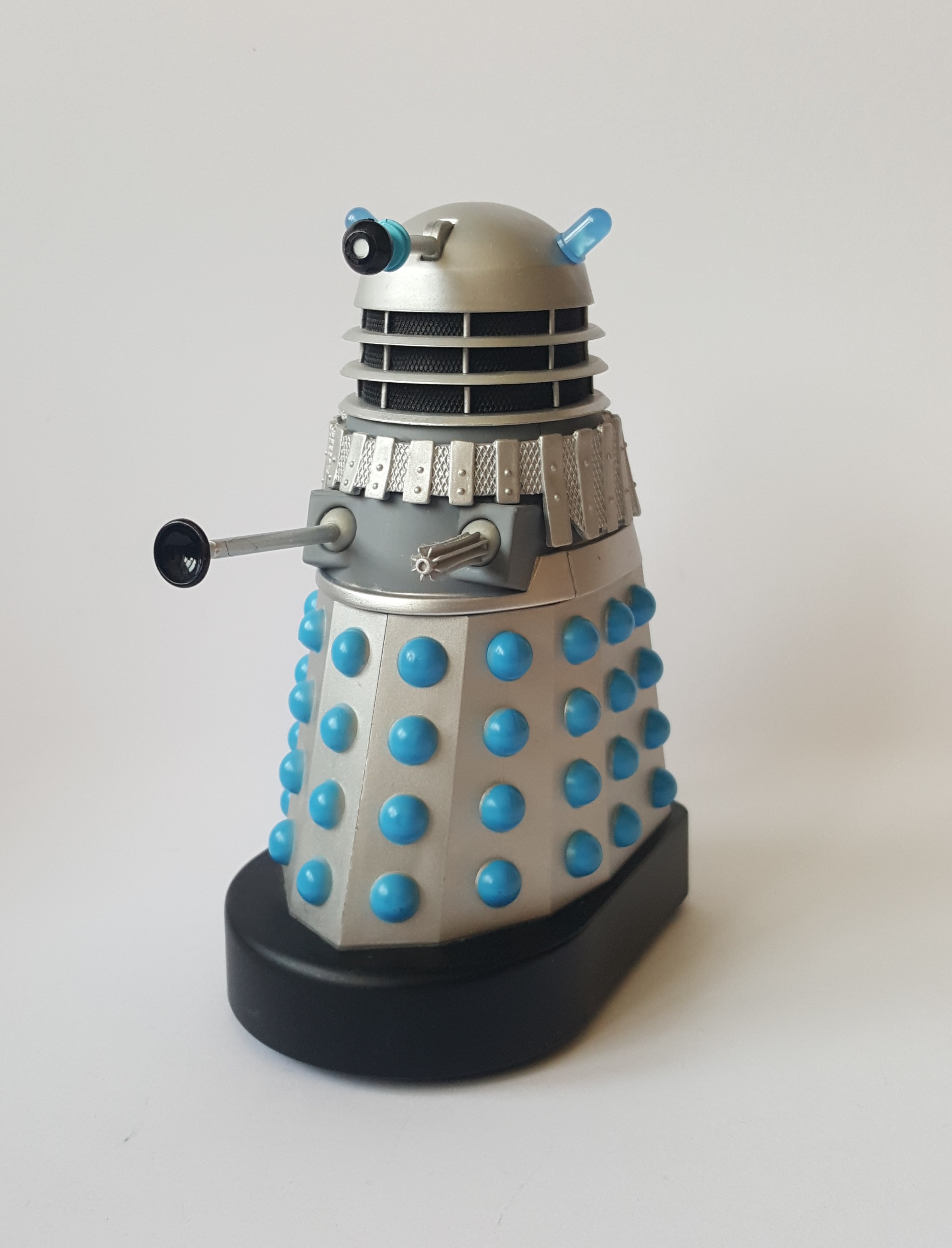 This Dalek was a simple slight repaint of a Day supreme (his midsection is scratched unforunately) into this colourscheme that appeared on Pebble Mill with Tom Baker in the 70s: 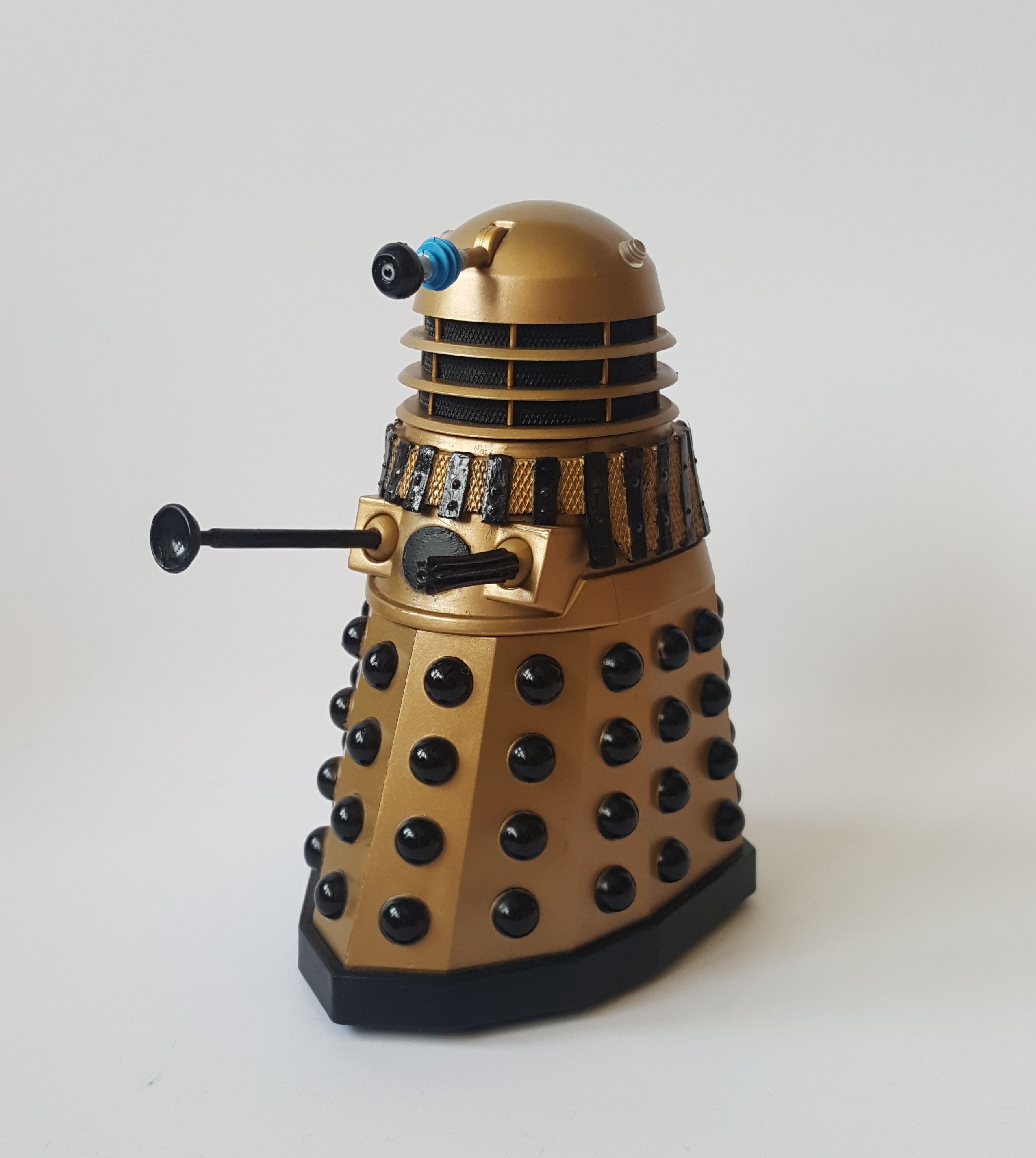 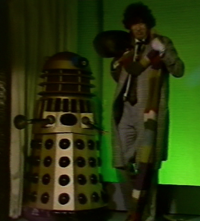 Gold and silver Dalek from Children of the Revolution, made with a Day supreme and some swapped out parts from a 60s Dalek, with some repainting. Here he is with his little 3.75 inch brother 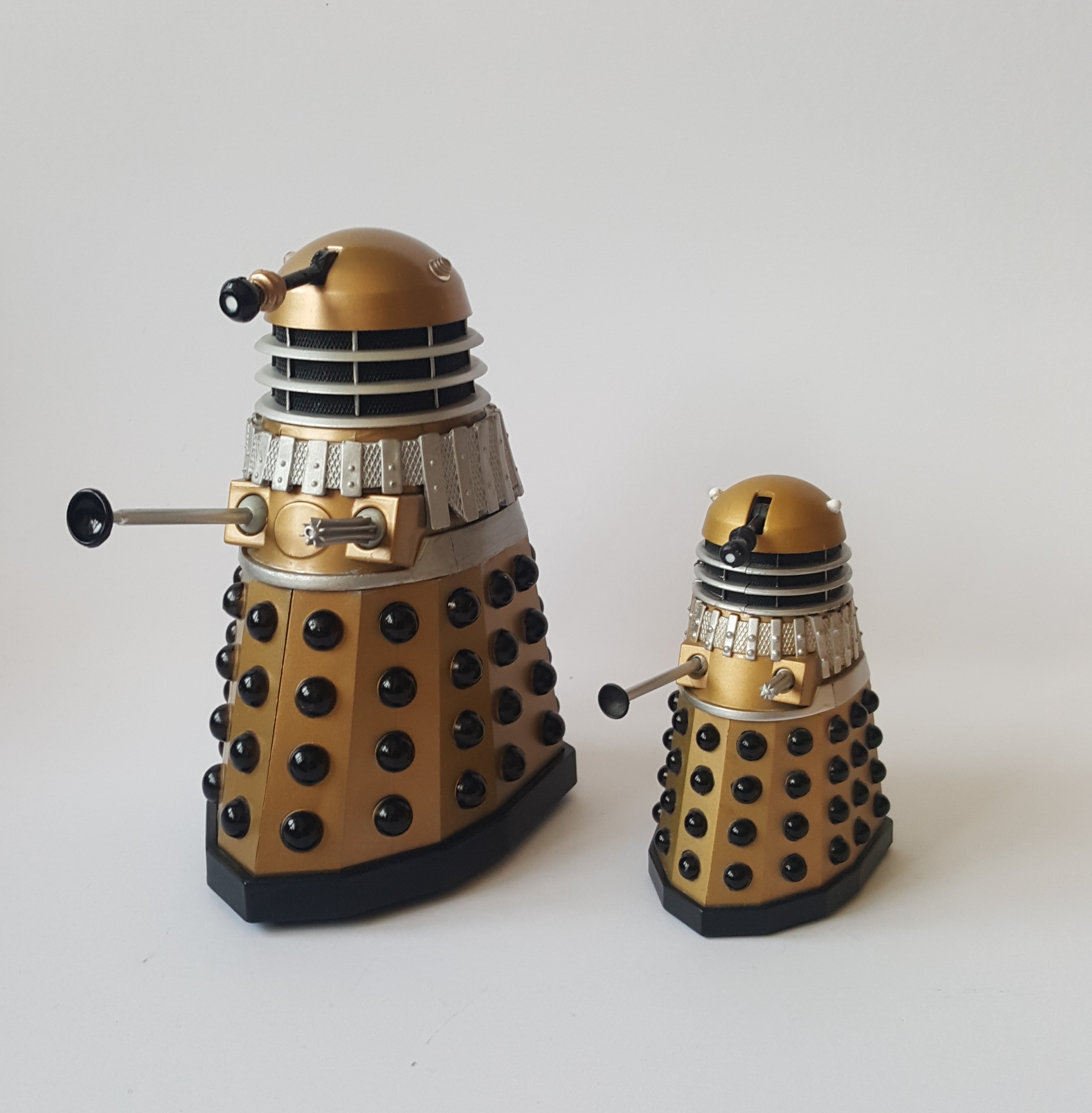 And finally a destroyed 60s Dalek, made with the mangled remains of an Evil Dalek (I may improve this one at some stage) 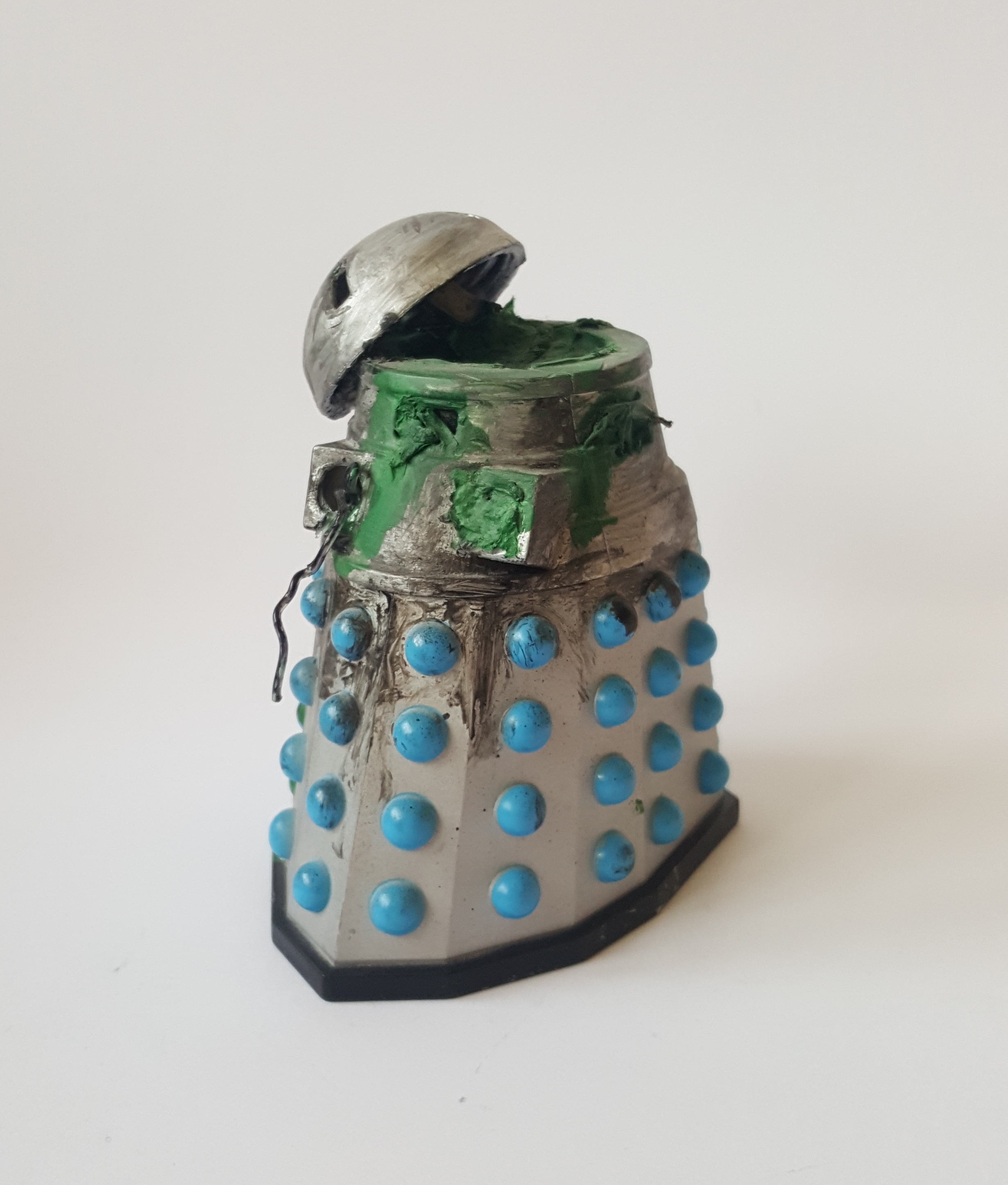 I also did some other Daleks years ago, including Zeg and the Black Dalek, the blue More than 30 Years Dalek, a red and silver Dalek and the Dalek from that 60s space annual. These are all in need of a complete repaint, Zeg and the Black Dalek are currently in progress but i've ran out of some paints so it will be a while before I get around to finishing those.
Top

They look great, nice work! I especially like the movie Dalek, it looks like it's an official release not a custom.

Damn that's a smooth paint job!
None of Doctor Who is canon.
Top

Mmmm, lovely. That movie dalek’s a beauty, as is the Pebble Mill one. The destroyed one does need a little refresh, I think, although not desperately. Filling the locator slots for the slats with Milliput or Greenstuff and sanding them down might have been a better move.
RIP TW