Thanks for the detailed response! I meant a 5.5” dalek. I was wondering bcecause my school has bought a 3D printer and it’s free for use to students over the holidays, so I’d been wondering about scaling one of these: https://www.mechmaster.co.uk/cg-lair/do ... index.html and printing to scale. Thanks anyway!

DalekCheese wrote: ↑
Wed Feb 12, 2020 4:14 pm
Thanks for the detailed response! I meant a 5.5” dalek. I was wondering bcecause my school has bought a 3D printer and it’s free for use to students over the holidays, so I’d been wondering about scaling one of these: https://www.mechmaster.co.uk/cg-lair/do ... index.html and printing to scale. Thanks anyway!

If your school has one, they probably have some sort of process for coming back and picking up your print after it's finished, since there's no way anybody can stick around and wait for it to finish printing. Even a tiny print like the TARDIS key takes a couple of hours.

When I first started out, I was using our local library's printer, and you basically showed up with your design on a flash drive (or made it in the lab using TinkerCAD or some other software) then one of the aides would take a look at it and import it into CURA, let you know whether or not it could be printed in it's current state, then you'd write your name on a sticky label and it would be added to the print queue, and they'd say "come back in about 5 days and it should be ready". Finished prints were left in an unsupervised tupperware container next to the door, so pretty much anybody could have walked in and grabbed them, but I got my first few prototype Auton hands printed that way.
Top 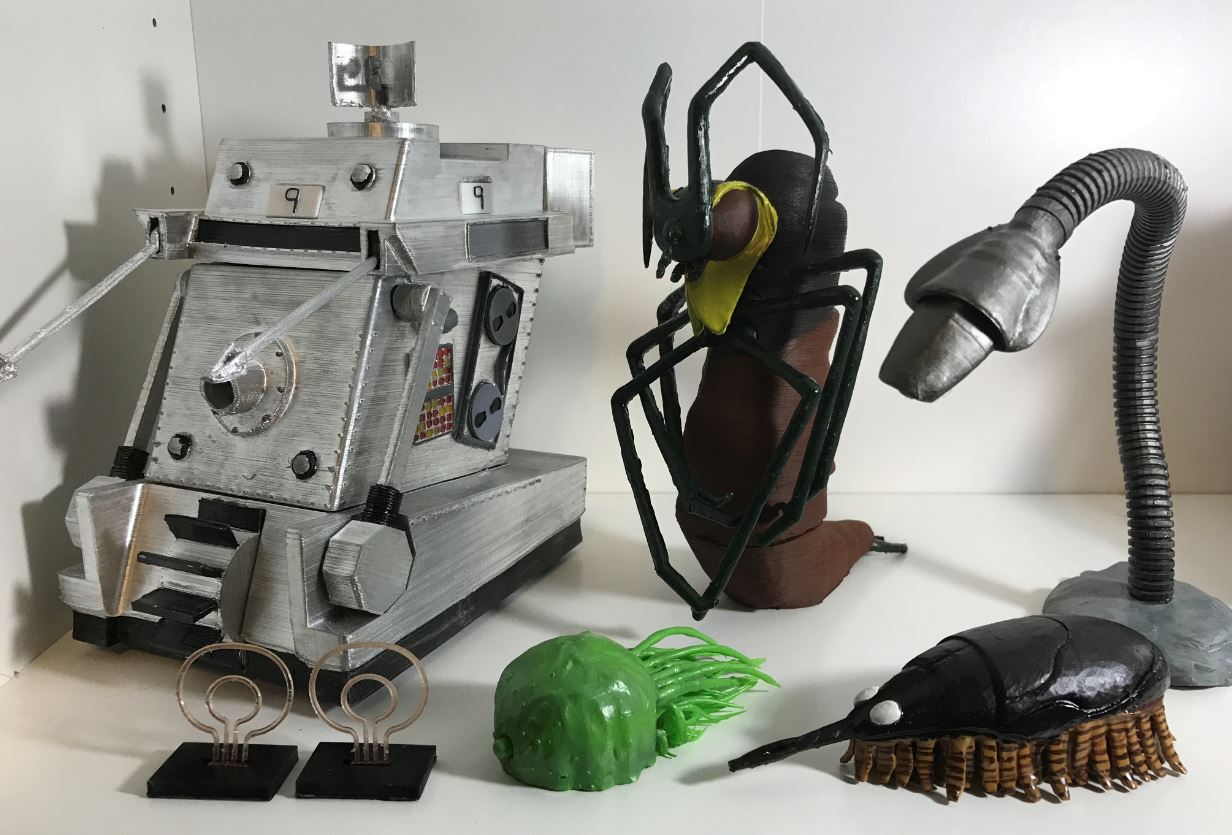 Finally got around to doing a bit of painting this last week.
Wirrn, Roots, Rutans, and Larvae Guns are finally done. Next it's on to the Toymaker Robots, and all their fiddly little surface detail.
Top

The Raston Warrior Robot is up for Beta on TinkerCAD.
I'll try to compile the Google Drive versions tomorrow.
There's both a PLA and a SLA version, though because the arms and legs are so thin, the PLA version uses the same 1.5mm brass rod knee and elbow joints in an attempt to maximize structural integrity.
Since detail is lost importing/exporting out of TinkerCAD, I'm going to try to go over the design one more time in MeshMixer to smooth the head and accentuate a few surface details on the SLA version before I upload to the website. I suspect this is what I'm going to have to do for all humanoid figures moving forward.
https://www.tinkercad.com/things/6d04bKJdUPA 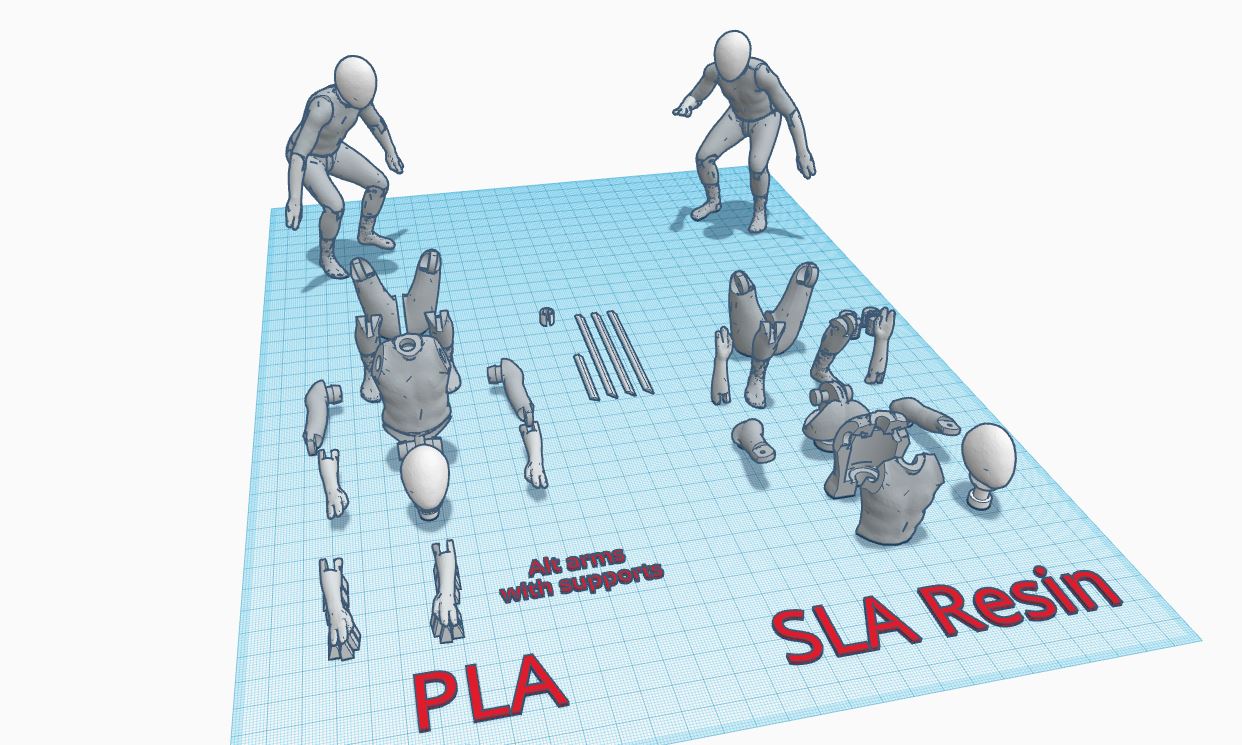 Looks awesome! What is the copper wire you use for these, again?
None of Doctor Who is canon.
Top

They're small brass rods used for model airplane making. https://www.amazon.co.uk/Round-Brass-Ro ... B01C6LUO5Q
They're easy to find on both sides of the pond, and I like them because they wont break or bend, but are soft enough that you can cut them with a regular pair of wire cutters.
Basically, you stick the rod in from one side of the joint, mark it, cut the rod just a few mm shorter than where you marked, then stick the cut piece back in the hole and seal the hole with UV craft resin, crazy glue, or even a tiny blob of paint. This provides a sturdy clean-moving joint that can be just a few mm thick and invisible from the outside after painting.

So, without further ado...

This is my first properly humanoid figure.
There's both a PLA and a SLA version, though because the arms and legs are so thin, the PLA version uses the same 1.5mm brass rod knee and elbow joints in an attempt to maximize structural integrity and prevent snapping. The rest of the joints are regular pop-in.
I've included a few of the robot's lances and the knife that it uses to behead the Cyberman. Both of these can theoretically slot into a thin clip that goes around the wrist. As the lances and clip are just a couple of mm thick, they may not print on a filament printer, and should probably be printed with flexible resin in a SLA printer.
Since quite a bit of surface detail is lost importing and exporting out of TinkerCAD. The Google Drive version has refined SLA versions of the head and torso which attempts to restore some of that detail. Unfortunately, because meshmixer hates flat surfaces, I can't get too close to any of the edges. 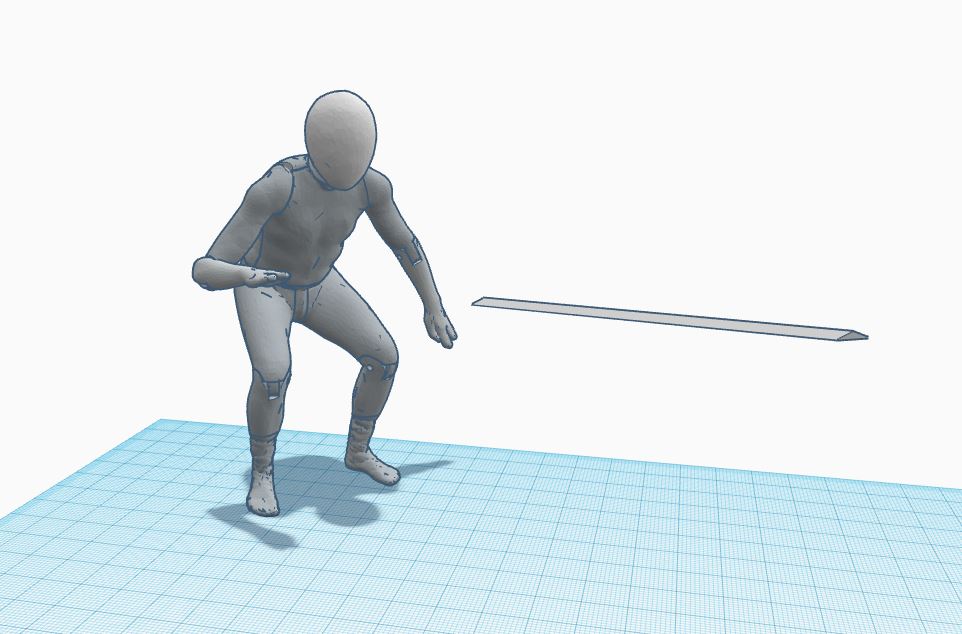 If I may ask, how did you model and split up the joints?

I came up with some designs through trial and error. Surprisingly, there wasn't much out there premade.
Everybody else seems to be using ball joints which look awful, unless you split every body part down the middle and glue them together around the joint. (which I did have to do for the Raston torso, since it was easier than doing plugs.) I've since had to redesign my original templates to work with resin which doesn't allow snap together parts, but is actually somewhat easier because of that limitation.

First, you need your complete non-parted out figure, all in one piece, in a neutral position preferably with the legs and arms in the A or T position.
Next, you have your two different types of joints.

The first are Rotational Joints that spin around a central post (Shoulders, head, and sometimes groin, waist, wrist, and/or ankles, space permitting) These are comparatively easy to carve up, and it's better to do them first before other joints so you have nice clearly separated limbs. You need to do a flat plane cut where you want to split off the limb, then place the peg on one side and sheath hole on the other lined up in the exact center. You can then fine tune a little bit by trimming away bits around the edges of where the arm attached to the body so there are flat thin bits that stick out when the arm rotates into different positions. The closer you can get to something cylindrical the better it will look. 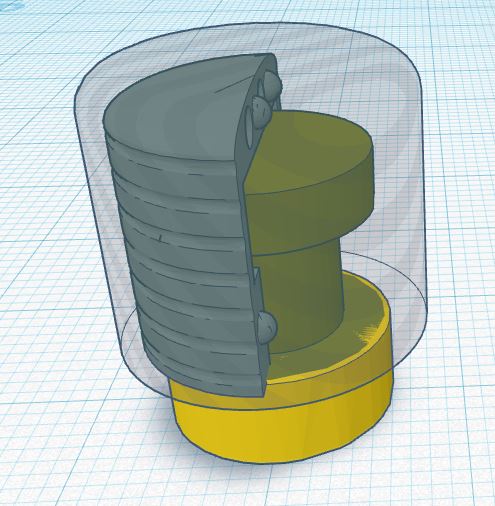 The second type of joint, Pivot joints, are ones that have to swing back and forth. These are a pain in the ass.
It's a little easier to show off visually what I've come up with. At it's simplest, you want to split the joint into three nested half circles with a central notch on one side and a fork on the other, but the half circles aren't exactly half circles, they're offset from one another so that the two halves rotate smoothly around the central pivot point. It's difficult to explain. I have a template that I use and resize in tinkerCAD as needed.
If you're in TinkerCAD, what you need to do is line up the pivot point so it's in the middle of where you want the elbow or knee to bend. Then you duplicate the arm or leg so you have two copies. The red and the blue shapes below are actually holes that need to be cut out. One from one copy and one from another. Once you've done that. separate the pieces, and you'll see how they're supposed to fit together. Cut away the excess and then the two halves are complete.... mostly. I then take a copy of the forearm part and rotate it multiple times around the axis point to see areas where it overlaps the shin piece, due to surface details. This can then be trimmed down and cleaned up on both sides until you have something that looks like it will rotate smoothly.

The PLA versions of these joints are even more complicated if you want to make them snap in. You have to shave the parts off in a few other places and get them just the right width (less than a mm) so that the've got enough clearance to snap in without cracking the forked bit when you force them together. I've been doing this for 3 years now, so it's sort of something you eventually get a feel for after many many failed prototypes. 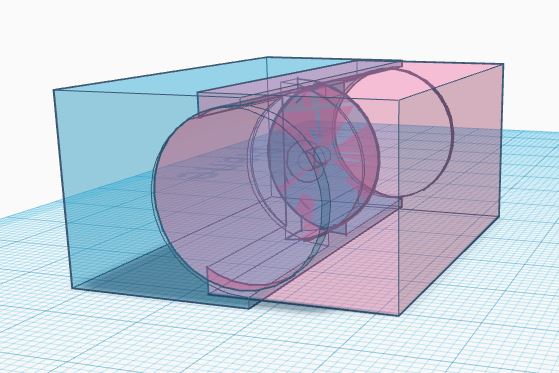 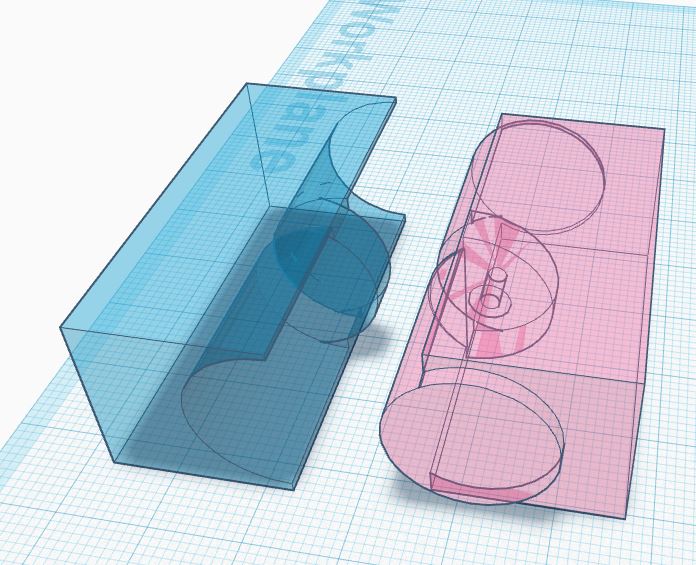 Here's an example of a non-Doctor Who action figure I made for my nephew which shows how some of the parts fit together. 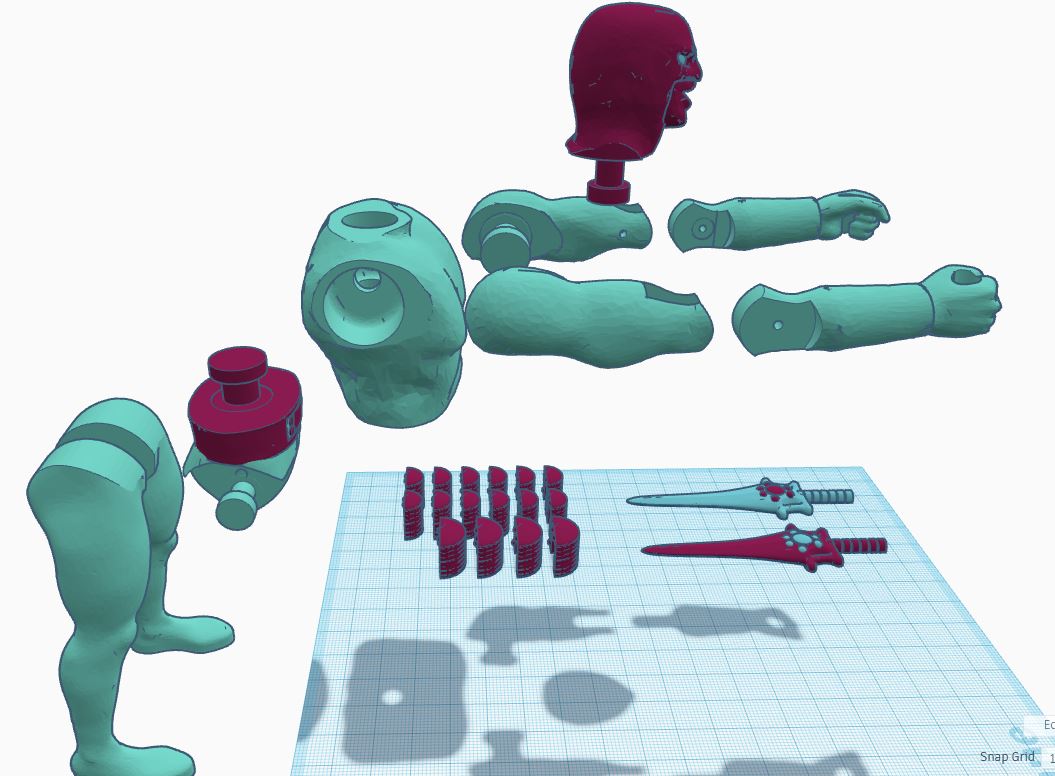 Hot Damn! Less than 24 hours after I posted the file links and somebody's already fully printed one!
Good news, it looks like all the moving parts work *and* it can stand upright (well, crouch) without falling over. Something I wasn't 100% sure of.
All in all, I'd say that was a pretty big win. I'm always pleased when I can successfully one-and-done a figure. 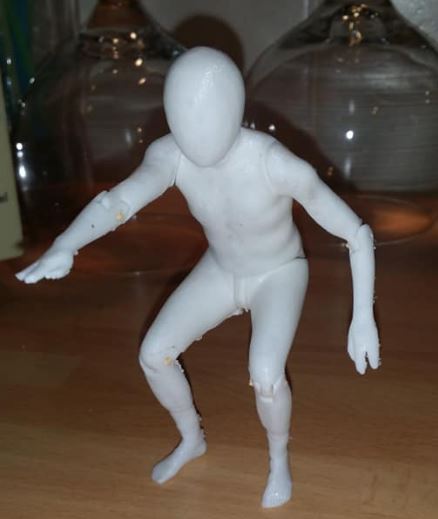 Looks good. Can't wait to see someone do a fully finished one.