I hate incomplete sets, and it has always bugged me that Character only released four of the five New Paradigm Daleks. Obviously I repainted one orange to complete the set. This was one of the easiest, because everything comes apart with screws, so no more broken hemis. One day I might have a go at the stone underhenge Dalek if I can find another cheap one. 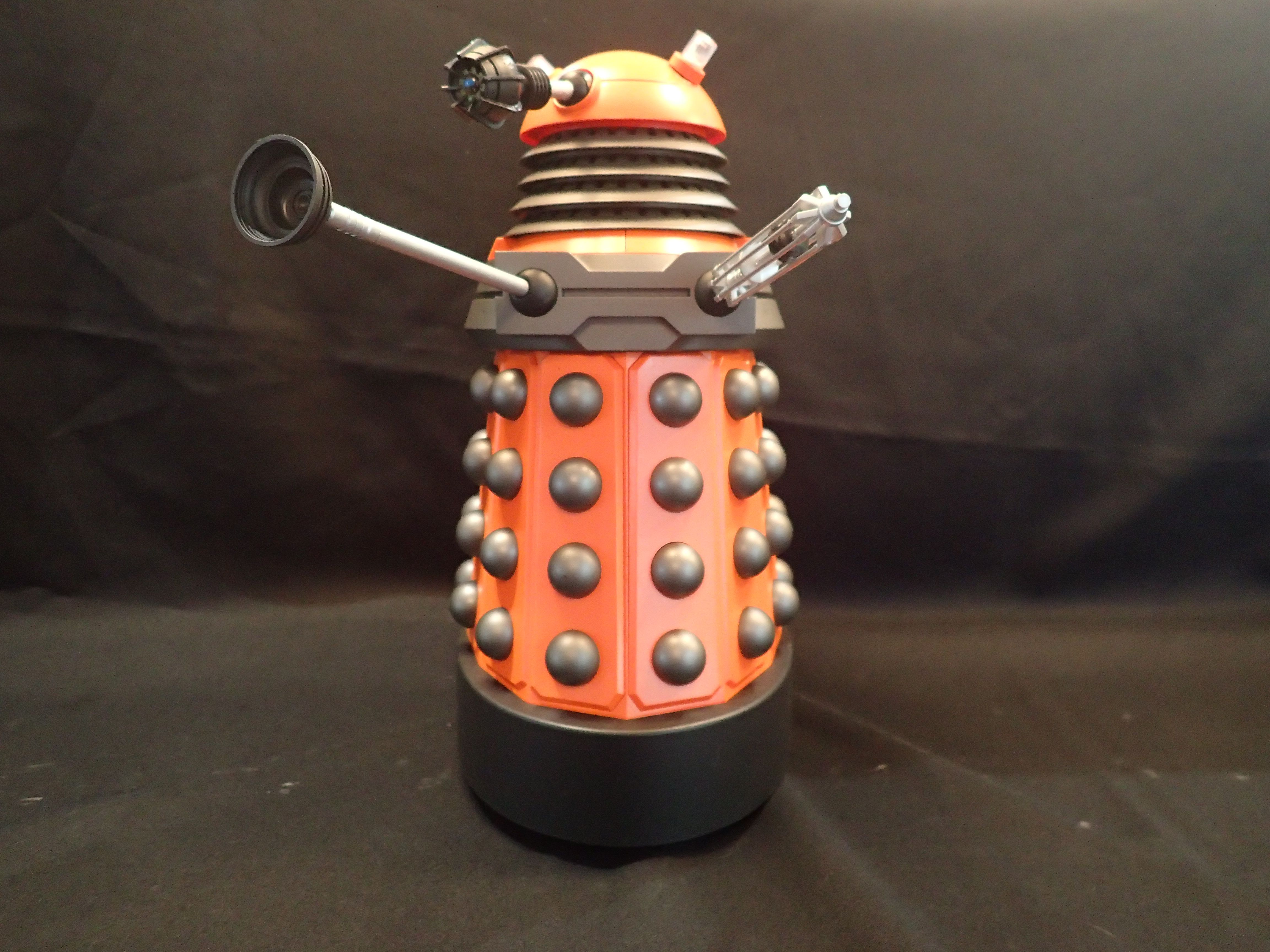 Very nice! Seeing your “remembrance” custom was what inspired me to do my own. I like the Ironside in particular. How long have you been at these.

This was a very simple modification, just taking off the shoulder slats and replacing them with a pair of bands to make a Dead Planet Dalek. 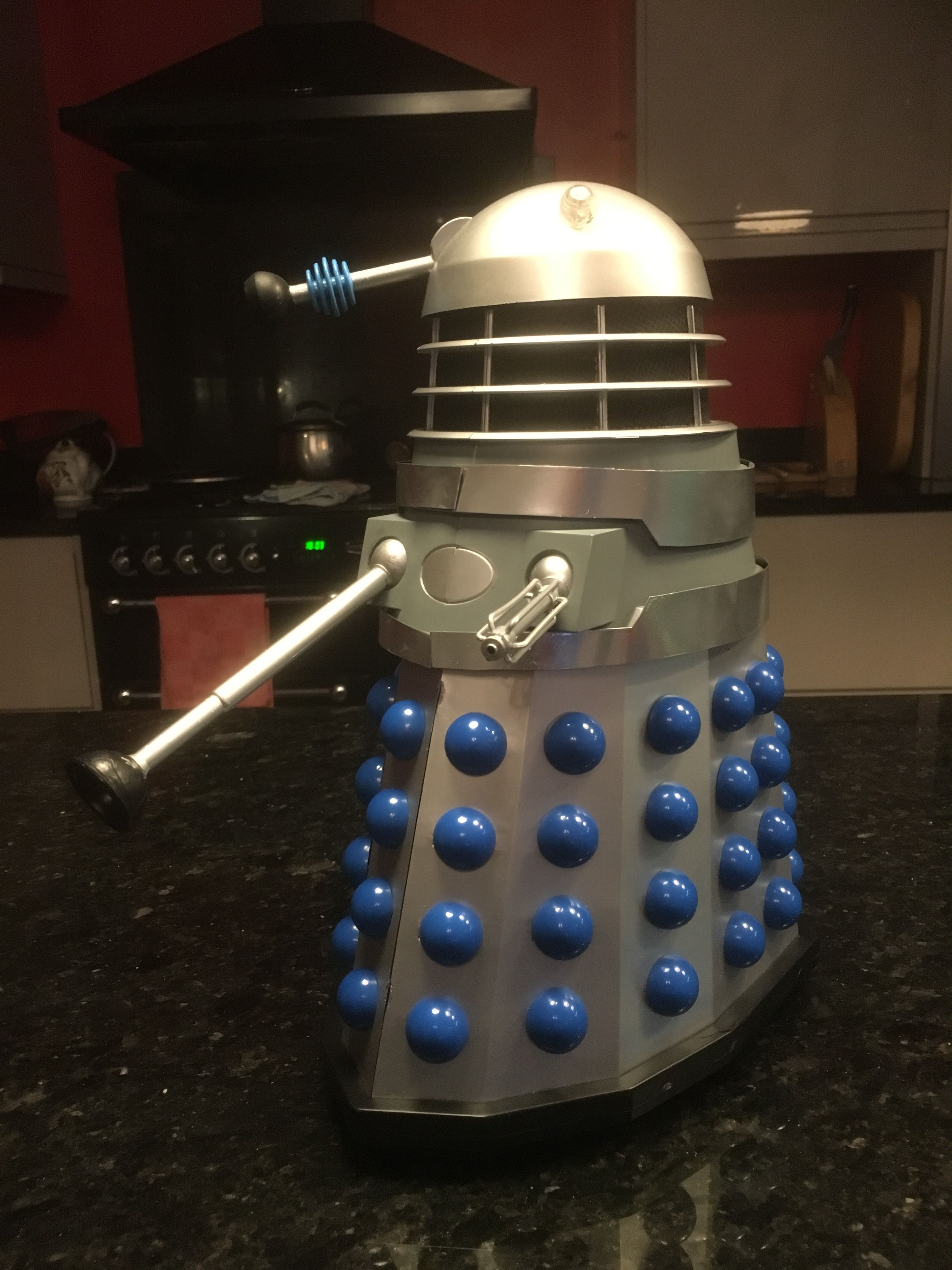 DalekCheese wrote: ↑
Wed Apr 22, 2020 6:53 pm
Very nice! Seeing your “remembrance” custom was what inspired me to do my own. I like the Ironside in particular. How long have you been at these.

I've been doing them for a few years now. It's quite sporadic, depending on when I can pick up fodder from eBay!

Here's the Supreme Dalek from Resurrection. 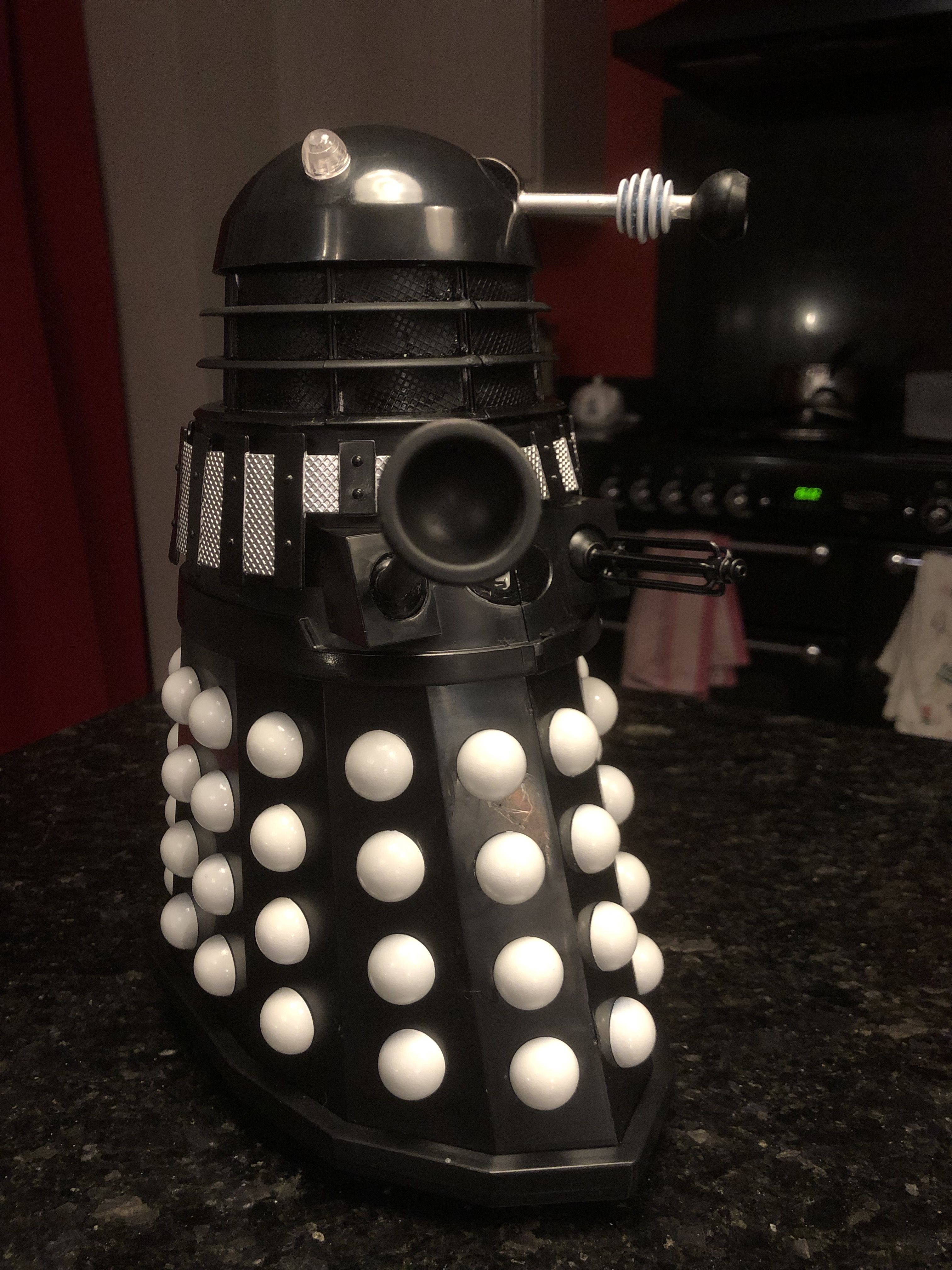 I mixed a Dalek Sec with a regular bronze Dalek to make this version of the Emperor Guard Dalek which (allegedly) can be seen in the background during The Parting Of The Ways. The hardest thing about this was sourcing the little saw blade. 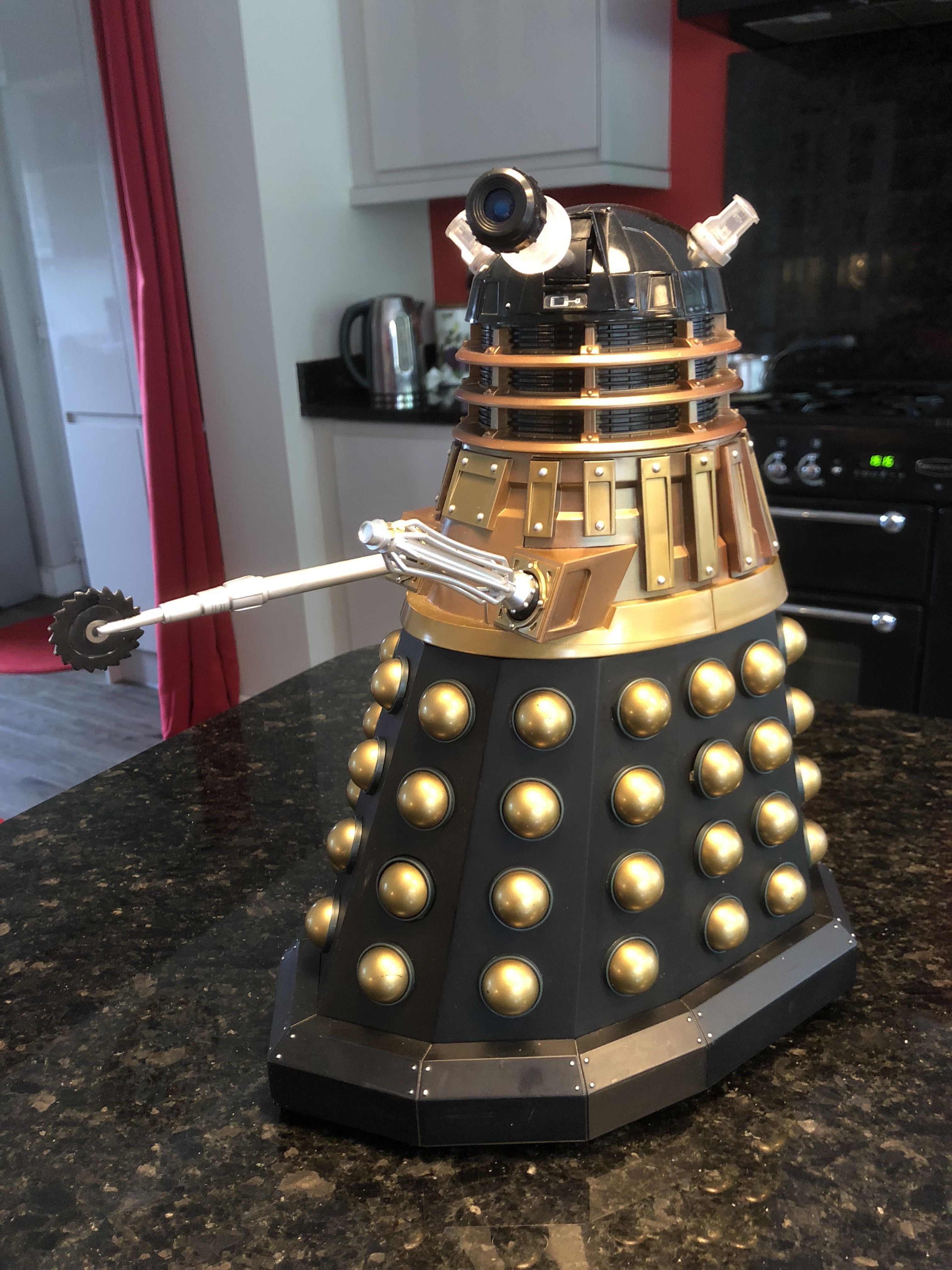 Of course, that left me with a bunch of left over parts, so I reassembled those to make the reverse scheme, never seen on screen. I added a flamethrower. I wish I could get a bigger flame! 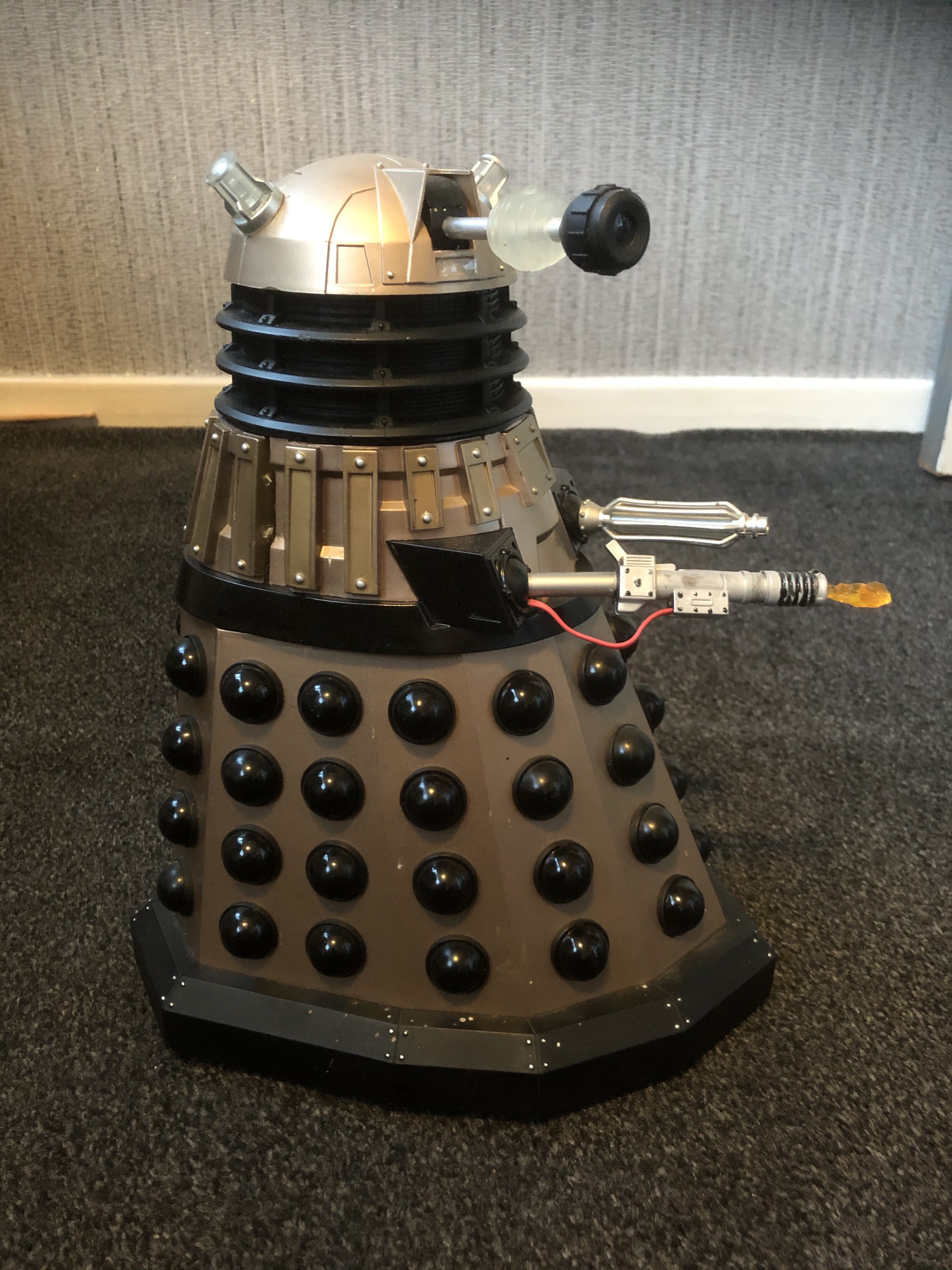 This is the rather tatty Dalek that appeared in The Five Doctors. I enjoyed that show, but remember feeling a bit disappointed at the very token role assigned to this lone Dalek. 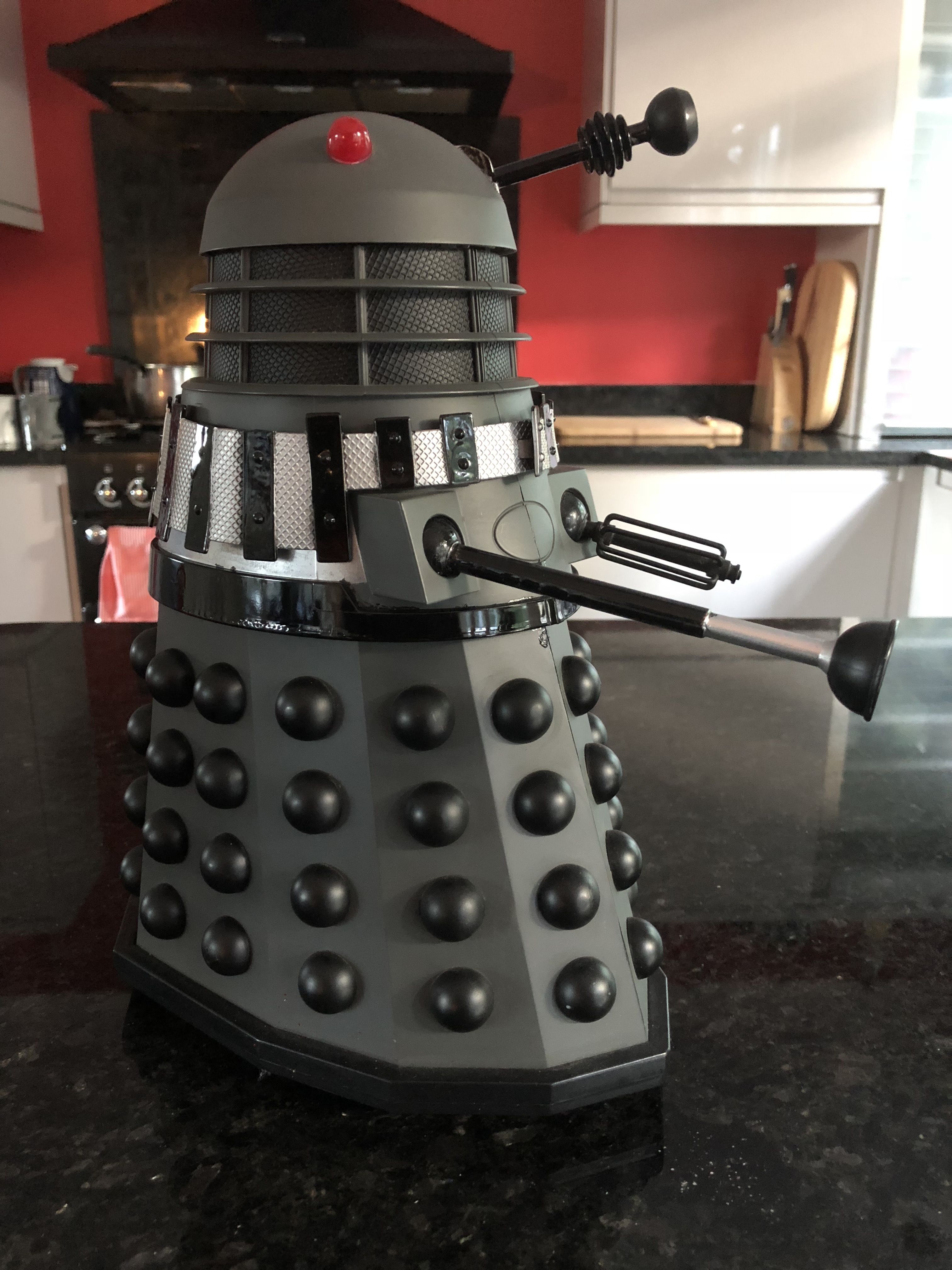 Venturing a little further afield for my colour schemes, I found something called Salvador Dalek. Great pun. This is my interpretation: 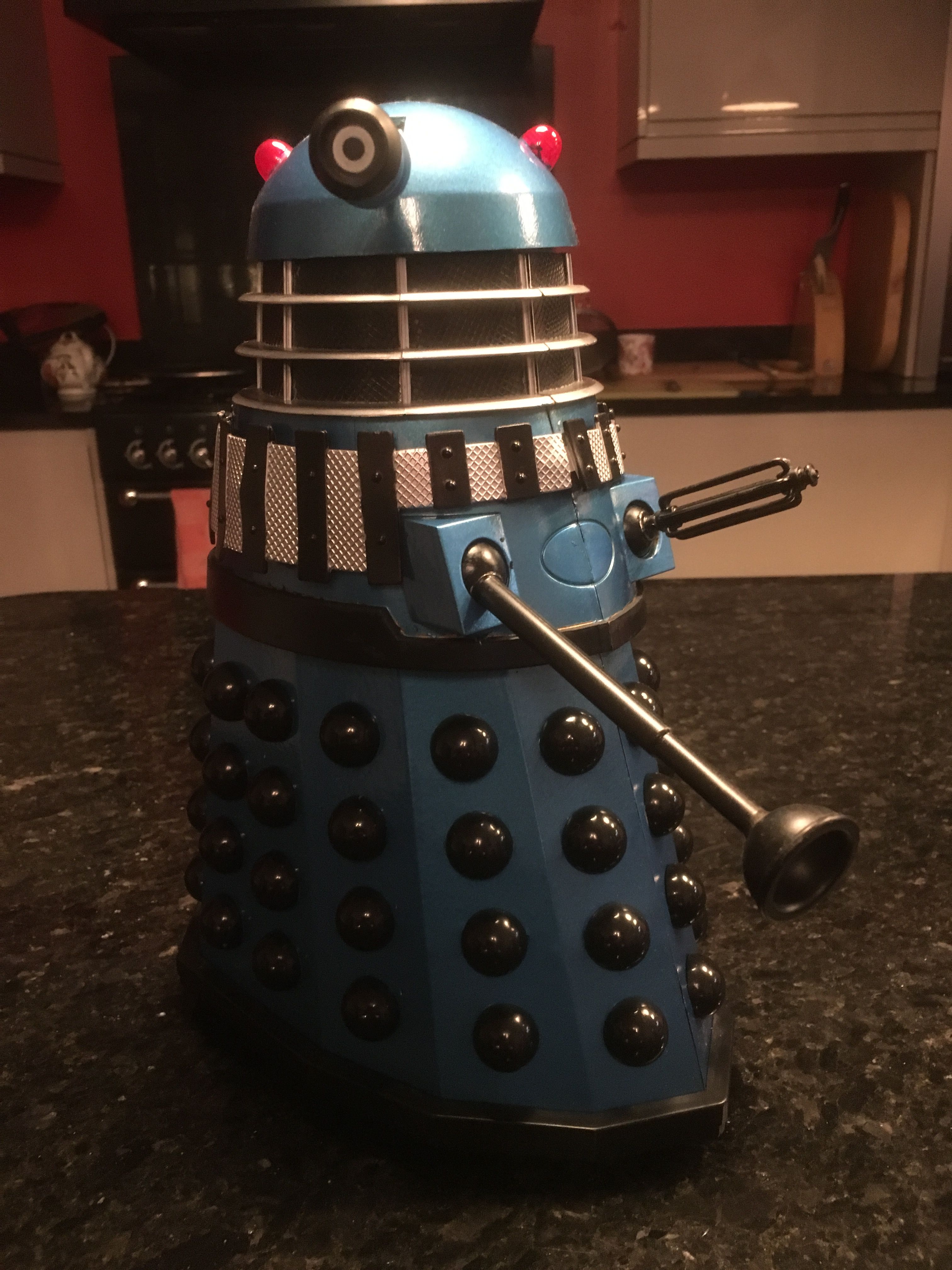 And my daughter begged me to make a pink Dalek, so here it is! 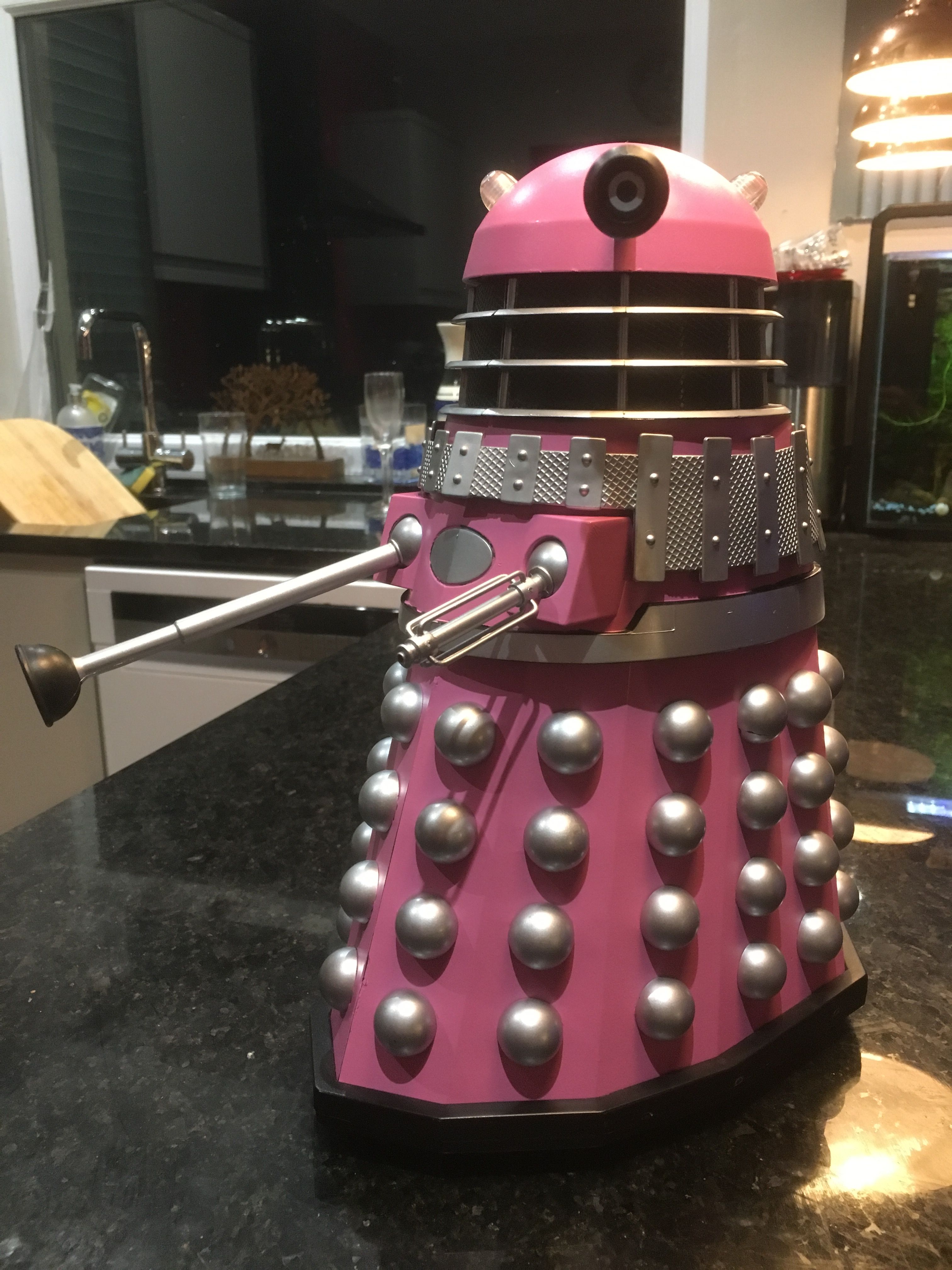 I bought this version of Dalek Caan on eBay. It wasn't;t very expensive, and someone made a really nice job of him. 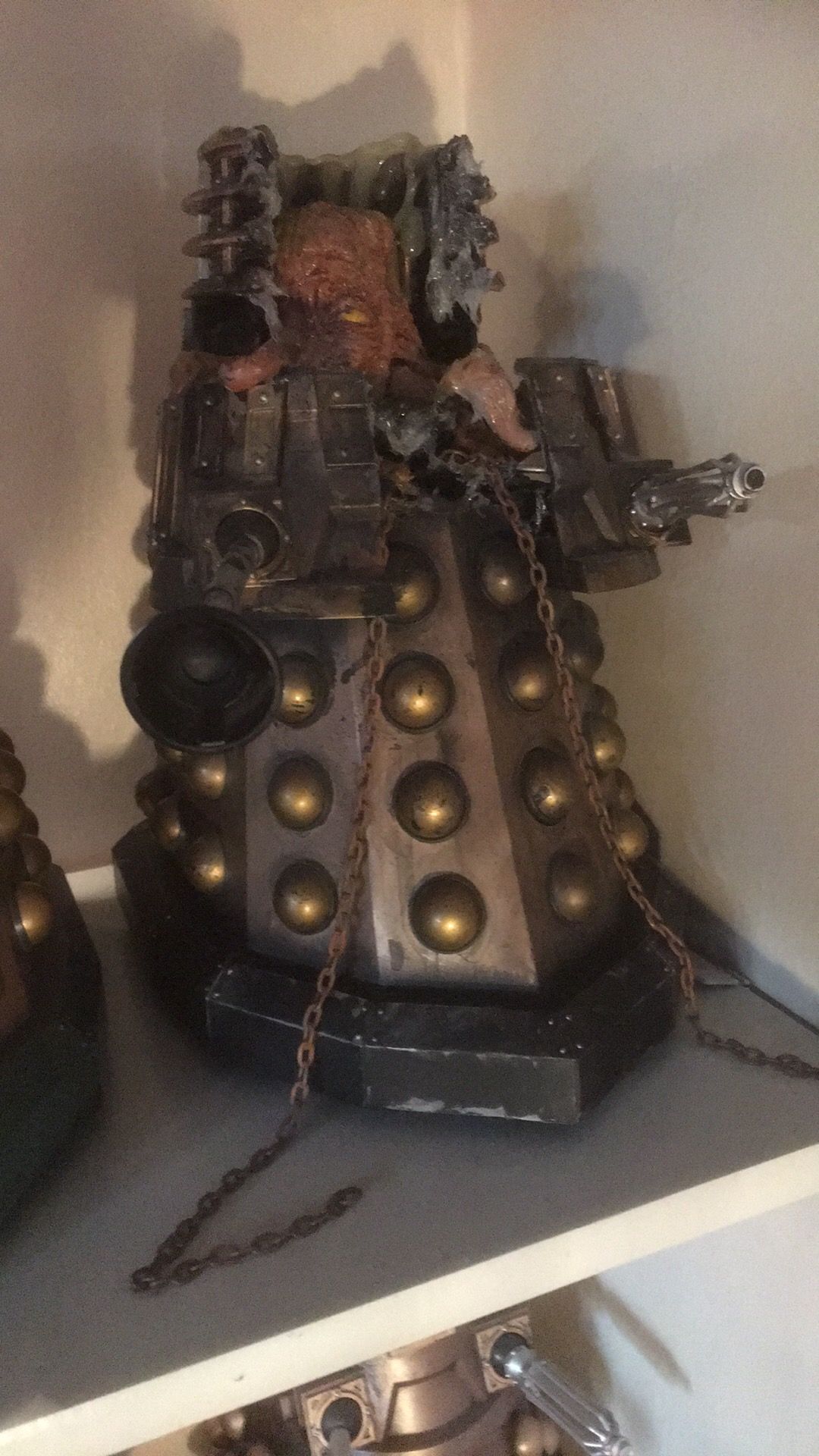 I found a guy on eBay who is brilliant at electronics. I sent him a Dalek and an Echo Dot, and he merged them to make Dalexa (or Dal-Echo, if you prefer). The column of bronze and black hemis are the controls. Brilliantly, it also still works with the radio control. 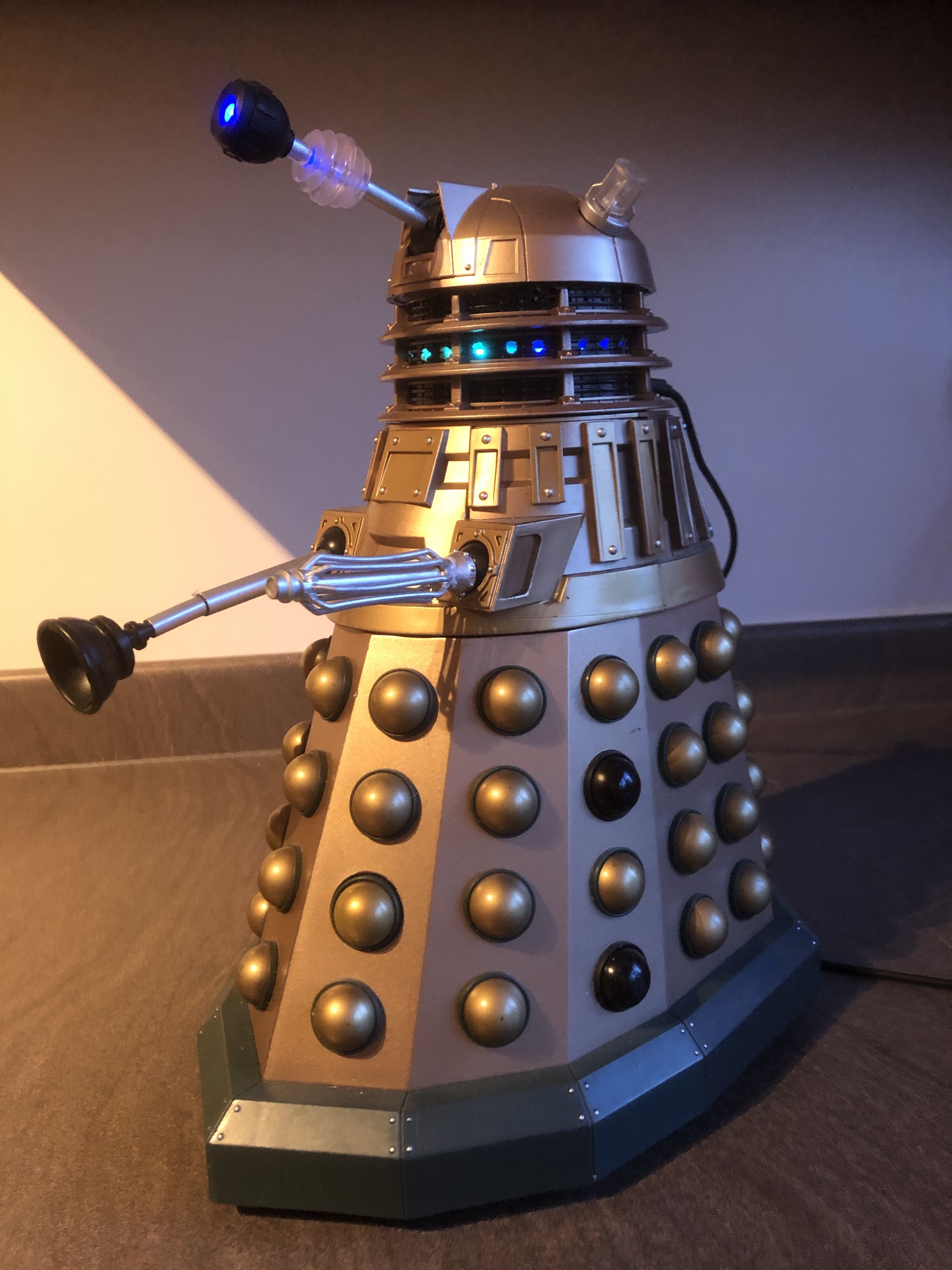 I also got him to make me a radio control Union Flag 50th anniversary Dalek (the actual release version was a static model), and this regular Dalek with little blue LEDs underneath to mimic the hover effect. 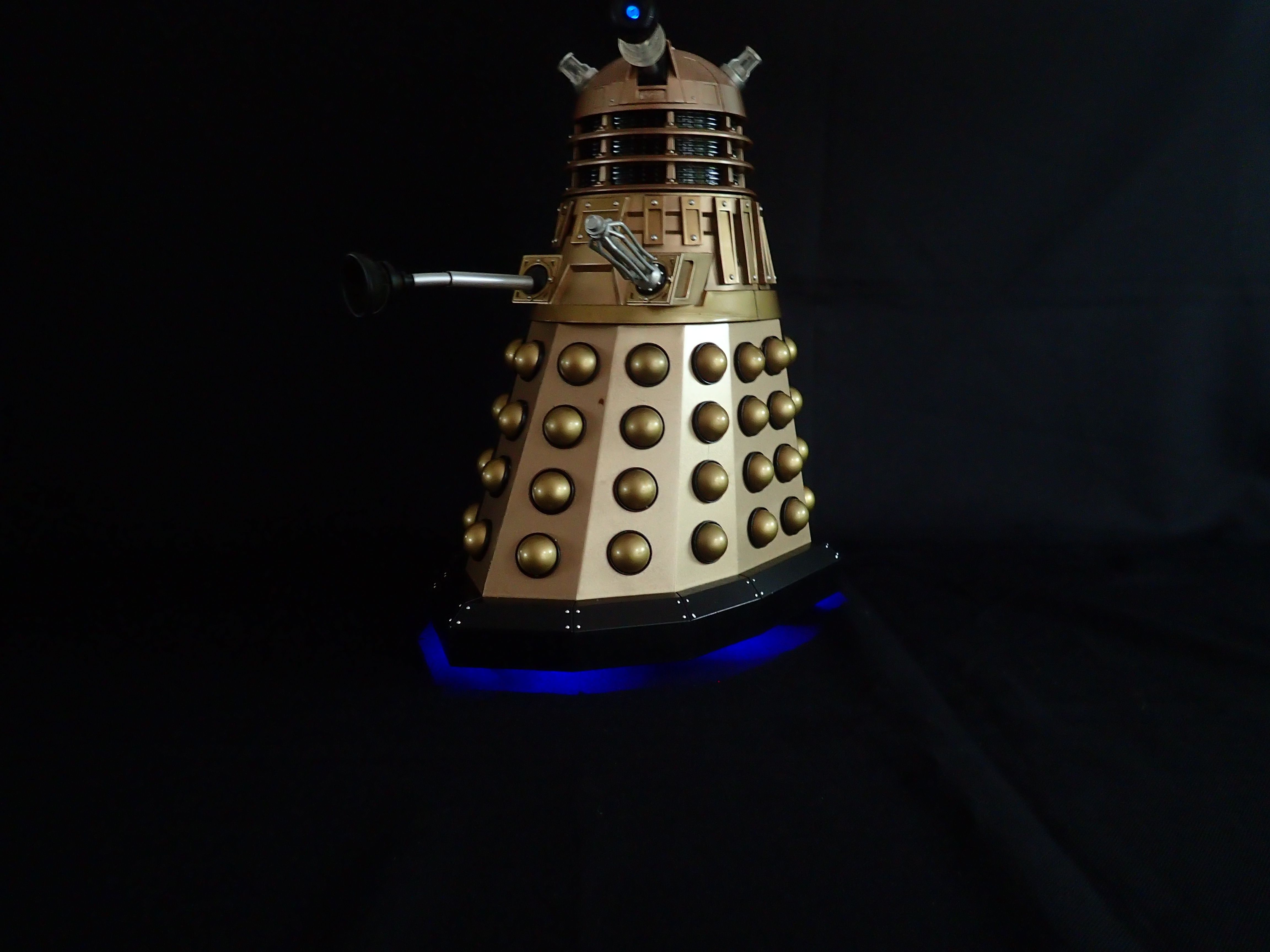