Well, I'm looking for a custom Krarg (from "Shada") figure, and I don't care how i get it.

It's beyond my customizing abilities, so I'm hoping to find either a 3D model or someone who's willing to do a custom commission.

Don't know if it's bad form to ask for commissions on here, but I figured I'd put it out there. And my google-fu hasn't turned up a 3d model, so... if anyone has some insider knowledge on on, I'd take that, too.

I now return you to your regularly-scheduled forum.

It's on my to-do list, but not anything I intend to work on anytime soon.
I can state with almost 100% certainty that nobody in my 3D printing group has created one yet, but we've got multiple designers working at once so things are coming out a lot faster these days than when it was just me.
The costume itself is simultaneously incredibly simple and complex at the same time. You could probably very easily make one yourself by taking an normal Character Options figure you don't care about, building up the body a little bit with miliput, then taking the plastic card packaging the figure came it and cutting it up with a pair of scissors into somewhat random triangular and diamond shapes. Then glue these in an overlapping pattern starting from the legs up, and spray paint the whole thing black when you're done. Instant Krarg.
It's a little harder to 3D model, since those plates are incredibly thin but also slightly curved. You'd have to find a way to give them enough support that they print properly as a solid object without having gaps underneath or cutting through nearby plates. Articulation would also be a pain in the ass since it's one of those costumes where all the joints are completely covered.

Here's are a few photos of the surviving exhibition Krarg costumes. I believe the first two are the same costume, though I have no idea why the first one is so white, unless the cheap Naugahyde they used got extremely faded with time (you can see the edges are still black) or they re-spraypainted it a lighter gold color to make the "Krarg Leader" that stands behind Tom in the Shada VHS intros... though I don't think got used in any studio recording sessions, as he only appears later on the Krarg ship. 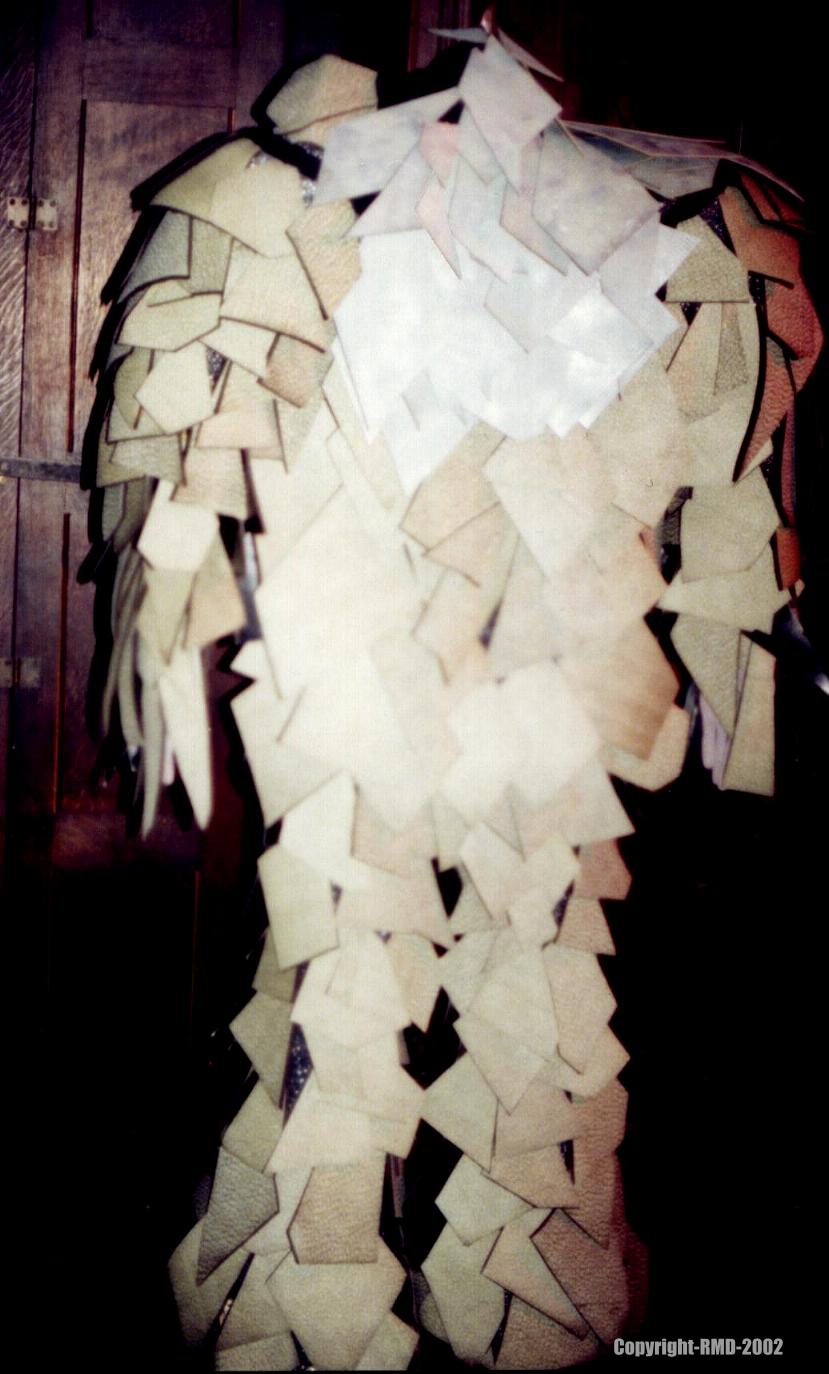 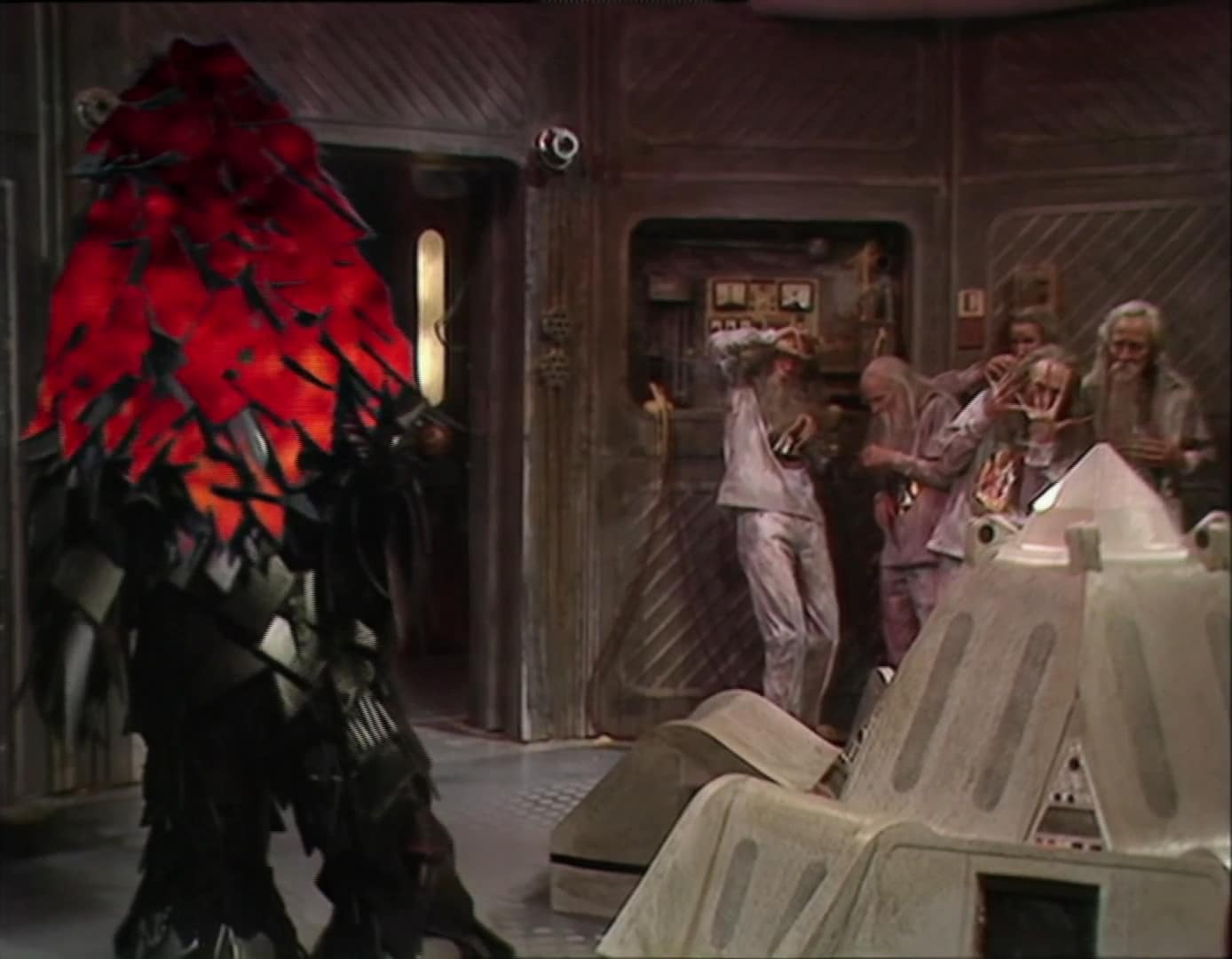 I've definitely considered covering an old figure with bits, though attaching that may little plastic shards may be the sort of small-scale work my big fingers weren't really cut out for.

A couple of observations: Nice to see the closer detail of the costume.
- I had assumed all the bits were triangular, but it's interesting that they mostly aren't.
- Are you sure the sides of the "scales" in that first image are black? It looks like mostly shadow to me, honestly, though it's hard to be sure since I'm not 100% clear how much of the lighting is the flashbulb and how much is from side sources. The big pieces of the left arm look most like they might be genuinely black on the side. Though it would be awful hard to make lines that clean if you were just spray painting the existing costume.
- This is either BBC 70s-era monster-making at it's most brilliant or its absolute laziest. I can't decide which.

They might be just shadows, but the pieces on the right shoulder and leg definitely appear to have a uniform thickness.
from the surface texture and the way the costume bends in the surviving footage, if I had to hazard a guess as to what it was made out of, I'd say a combination of 1/8" and 1/4" foam-backed marine vinyl. The same sort of stuff that would have been use for automotive and couch upholstery back in the day. The vinyl and foam are stiff enough that it'll maintain it's shape, but still move freely along with the actor, mainly creasing along a horizontal plane, and keeping a little bit of that crease after it's moved.

The Krarg were supposed to be creatures of living charcoal so I could see them deciding that this was the closest fabric texture they could get to simulate that.

add a space to the question you get "Is O a custom Krarg from Shada" and the answer is no, O is the Master.

And yes, 3D, I think that's a good estimate on the original material. Perhaps spot-on. Though if I do decide to make this, I'm not going to bend over backwards to simulate the texture.