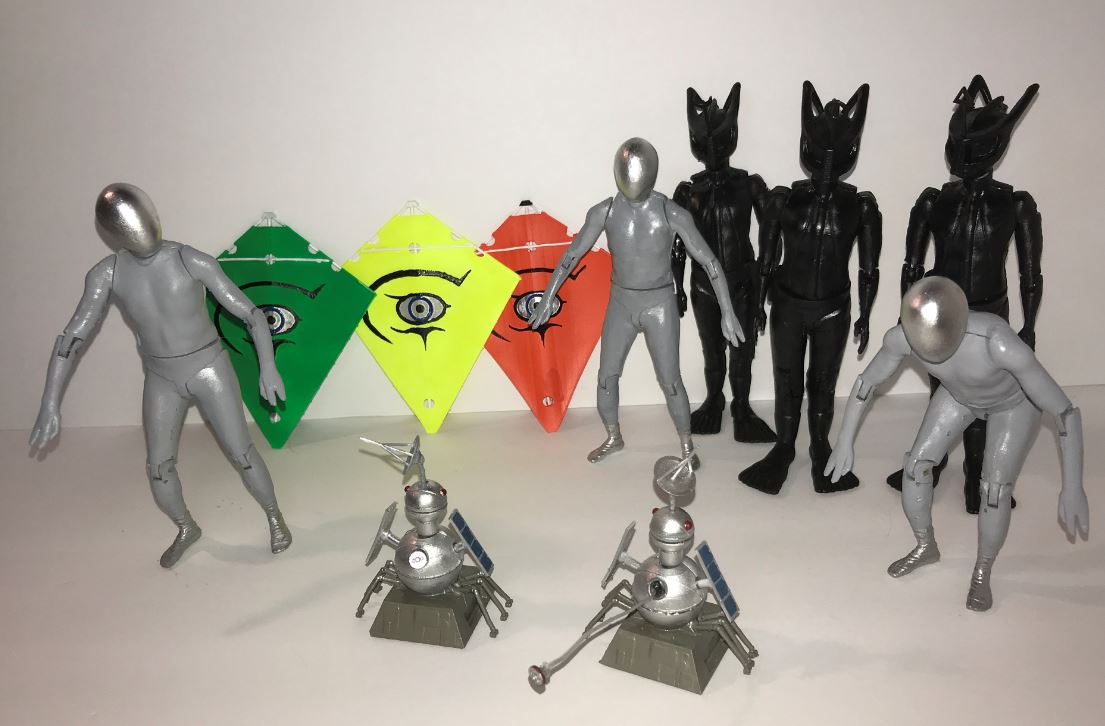 Finally got the last two bottles of fluorescent airbrush paint I've been waiting on this afternoon, so all the new figures are now fully painted.

I may end up having to do an Argolin figure at some point in the future just because I can't think of anything else to use three big bottles of day-glo yellow, orange, and green paint on.
Top

I really like the screen-accurate paintwork on the Raston, with the shiny head and the matte finish body.

Finally finished the video that I started recording way back in March in order to show off my new printer and figures #29-32. There shouldn't really be any new information in here, but if you want to see what some of them look like (sort of) in action, here you go. 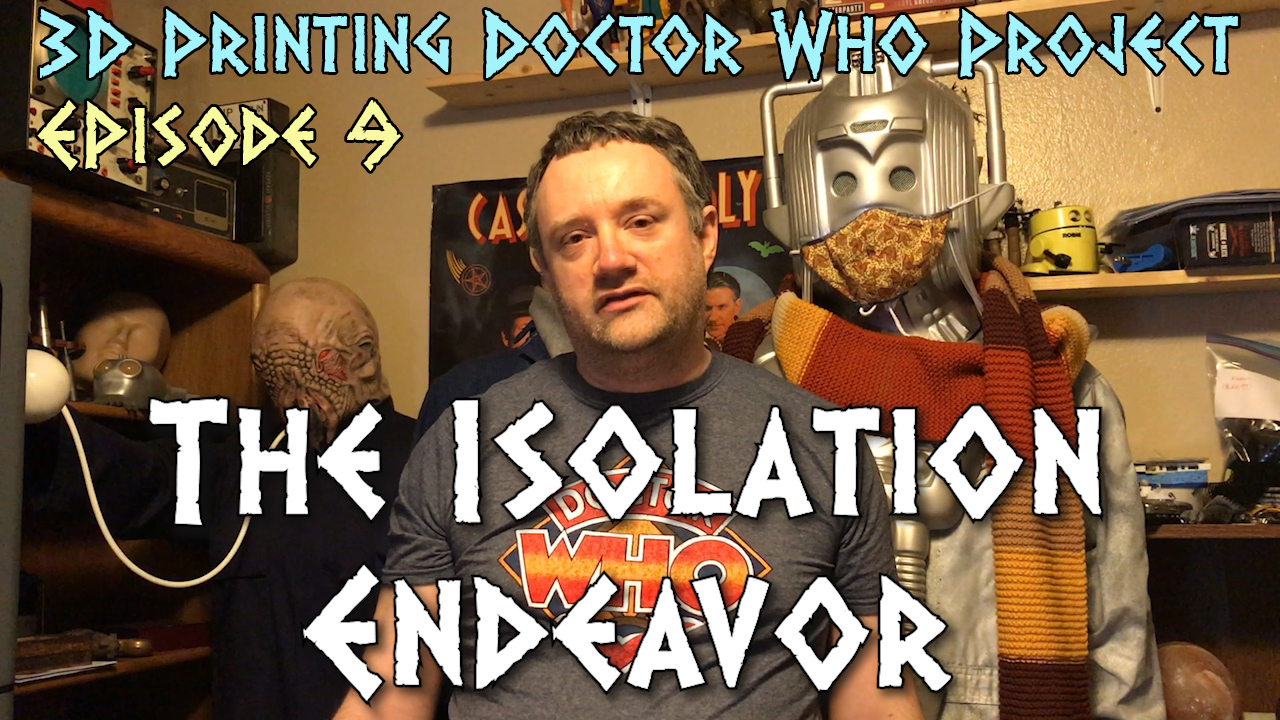 
There's also a brief shot at the very end of my first test print Emperor Dalek with light up LED action. This is the mostly unmodified Edward Felix version with some minimal LED supports and the new base plate added. Now that this video is finally off my plate, hopefully I'll get a chance to work on v2.0 tomorrow, which will include the movable light-up eyestalk, removable battle damage plates and false "burnt out dalek guts" interior.
Top

Somebody on my facebook group asked the other day if I could make a 3D Printable roundel, which ended up being way harder than it looked. (EDIT: Thanks to BoundryHopper over on GB for an even better roundel design that I've now swapped out for my own.) Of course, just a roundel alone is boring, so I decided to make something to put the roundels on (without building an entire console room) hence the Zero Cabinet.

This one may be a bit tricky to print in regular filament since it has a lot of curved surfaces. The only completely flat bits are the two ends. This comes in two variants depending on whether you want to print it solid or with the roundels as a separate slot-in pieces, so you can make them semi-transparent.

Note, thatI had to flub the dimensions slightly so that you could actually fit the Peter Davison's figure inside it. I made it as snug as I could, but due to the way his arms are positioned I had to make it wider, which proportionally increased the overall dimensions by somewhere around 7 to 10%.
It's not too far off, but if you want a truly screen accurate version, you may have to shrink it a bit in your slicer software. 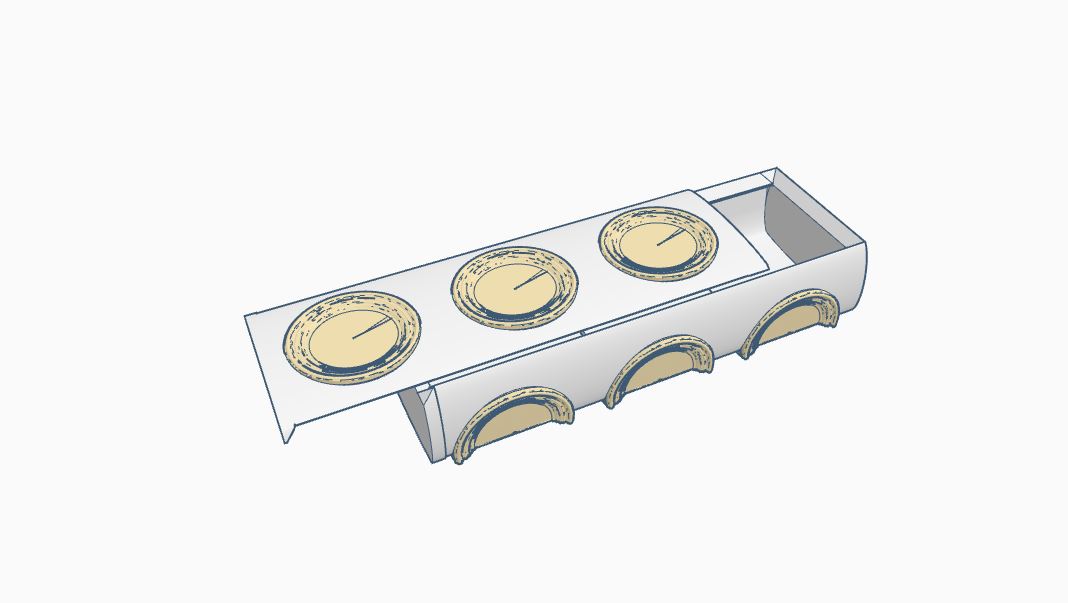 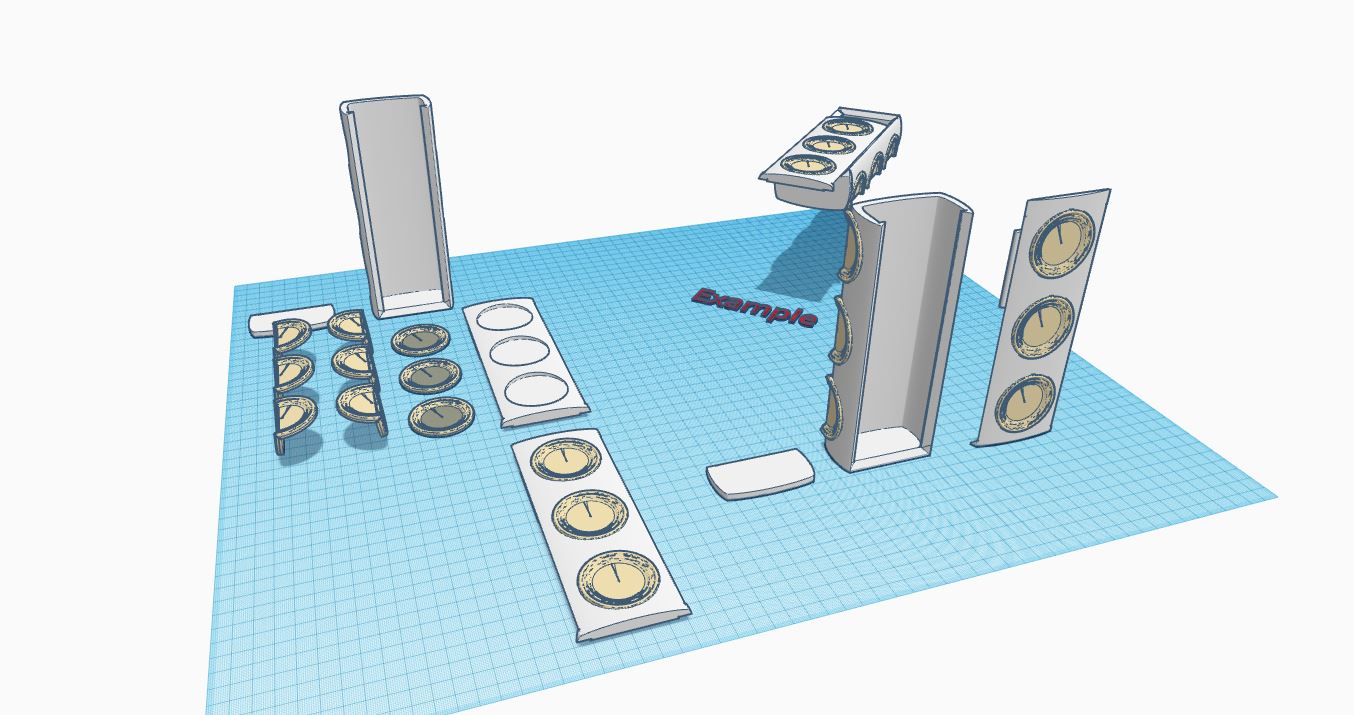 Updated the Zero Cabinet with a vastly improved roundel design created by Boundry Hopper over on Gallifrey Base.

In addition to just plain looking better, the roundels are also flatter than my original version, which means that the holes for mounting them no longer go all the way through the box in some places, so if you plan on printing the roundels separately you won't be able to see them from inside the cabinet, which makes the design more screen-accurate. (Being thinner, they'll also be a little more transparent if you're printing out of Natural PLA or PETG, and should look really crisp and clean if you print directly on a glass plate with no raft.) 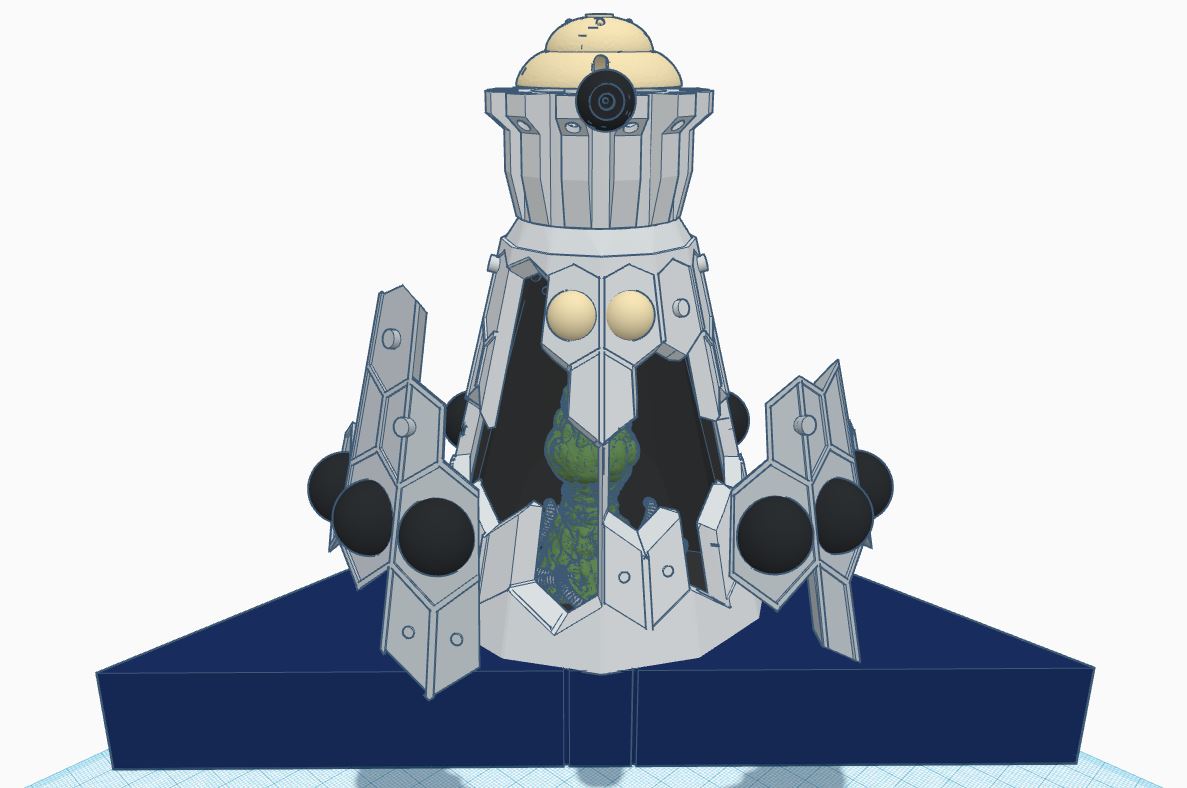 I've finally finished work on the Battle Damage Emperor Dalek, which can be downloaded and printed from the links above. Not only does this version come with LED supports, the triangular dais, and a movable eyestalk, it has removable slot-in 'Battle Damage' panels that will let you expose the destroyed mutant and burnt out wiring inside. (You have to provide your own tubes and wires, but I've included mounting holes for everything. You can use regular old 22 AWC wire or even printer filament straight off the roll for the tubing, and a few stretched out random width springs from the hardware store should nicely mimic the slinky-style wiring used inside)

I've also added an alternate split version of the corner plinth that should fit on resin printers (Though for resin printing you'll still need at least a Moai 130 or something bigger to print the skirt.)

Special thanks to Edward Felix on my Facebook group for designing the original that this remix was based on. 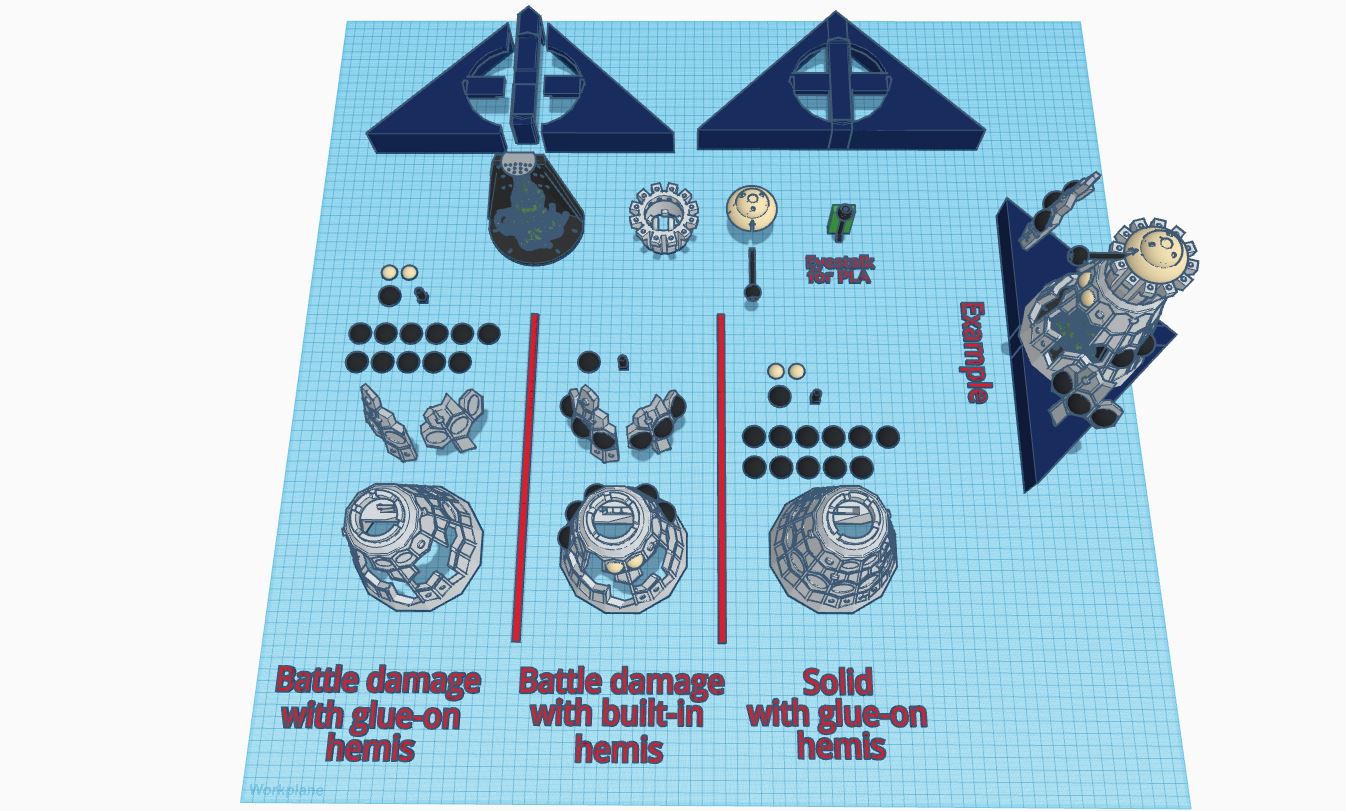 You'll notice this figure is labeled REMIX001, and I'll be adding this figure as well as a whole bunch that James Lee has been busy working on (including Kronos, a Draconian, Chameleon, Ice Lord, and more!) to a brand new section of my website that will take over for the old Guest templates section. Even though I always try to give fair attribution, I want to keep these particular figures separate and distinct from my own designs, because in some cases, people may actually be selling these and I don't want people to get confused.

Unfortunately, this may take some time, as I've been dealing with some pretty painful carpal tunnel issues, so I'm having to step back from doing too much figure design or anything else that require extensive use of the keyboard and mouse.
Last edited by 3DPrintingDoctorWho on Fri Sep 11, 2020 6:43 am, edited 1 time in total.
Top

I am so impressed with the work people are designing. Is there anyone who is making custom heads? I would love to see what you have made. I really want to make a Jackie Tyler head....no idea where to start!
Top 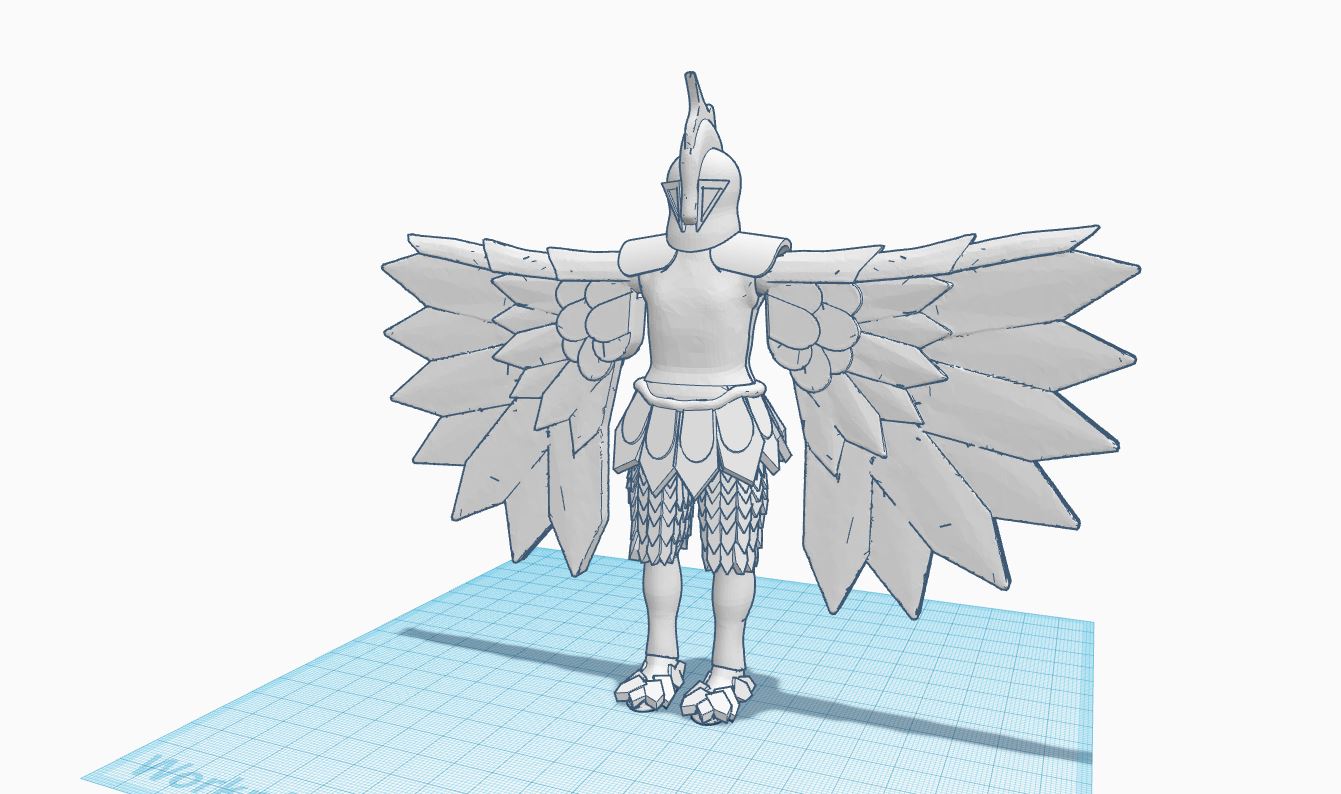 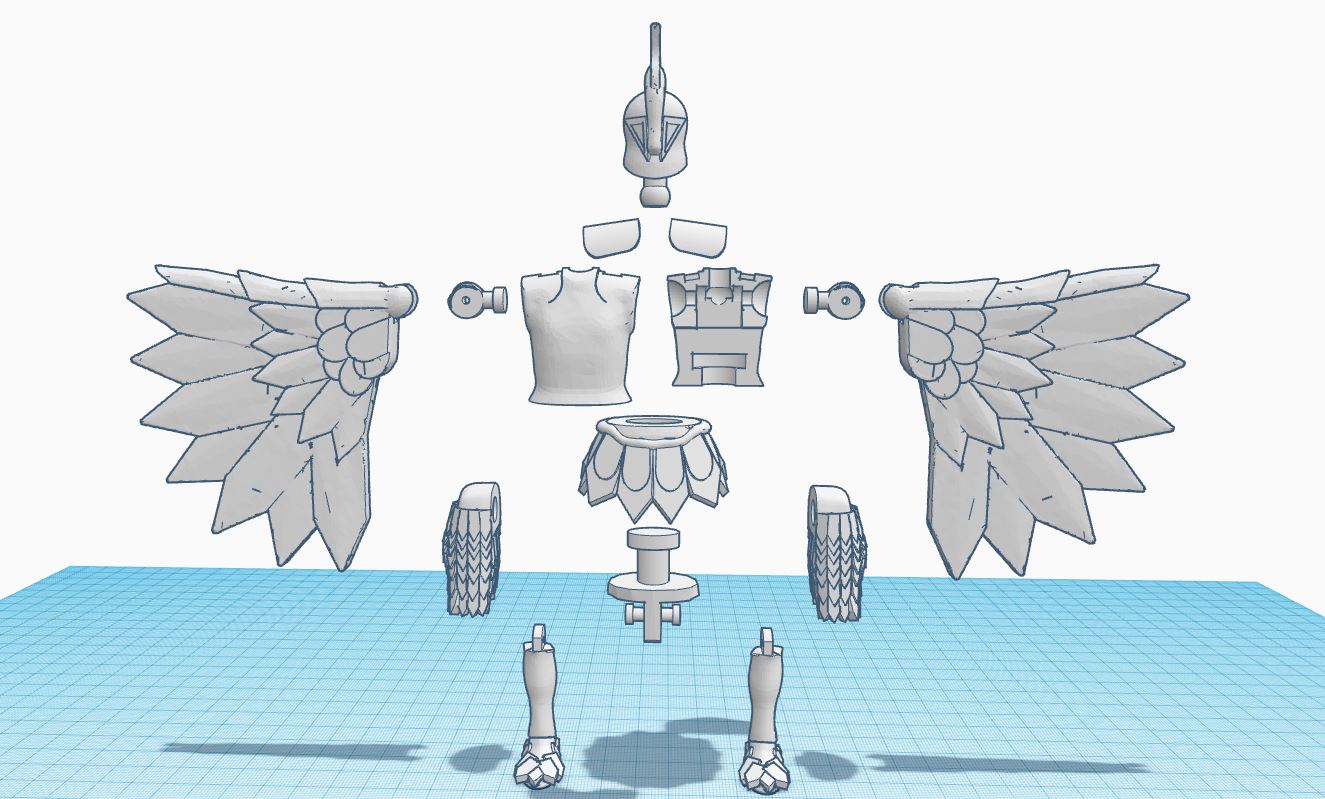 My first update in quite a while, but it's been a rough couple of months and doesn't look to be getting better any time soon.

My life is literally a hot mess right now as I'm still dealing with painful carpal tunnel issues that I've been told by my HMO aren't quite debilitating enough to warrant surgery (I'm only a 7 on the nerve latency scale, and they'll only do it if I'm at 10 or above), my wife ended up in the hospital with what turned out to be a hiatal hernia (which is at least something that can be fixed and was *not* cancer or something else equally horrible), my barely 6-month old $2000 Phrozen Transform printer is completely dead (I'm dealing with tech support, and it's almost certainly a wiring fault at this point, but they only speak Chinese so all conversations have to go through Google Translate), we're suffering through the worst heat wave on record (it's been above or near 100°F for almost 2 months straight), and oh yes... if you haven't read the news, most of California is on fire with the 2nd, 3rd, and 4th largest wildfires in our state's history all burning simultaneously. The air quality is so bad right now, it looks like we've been nuked from orbit. (That red dot on the satellite image is where I live, and we're not even getting the worst of it). 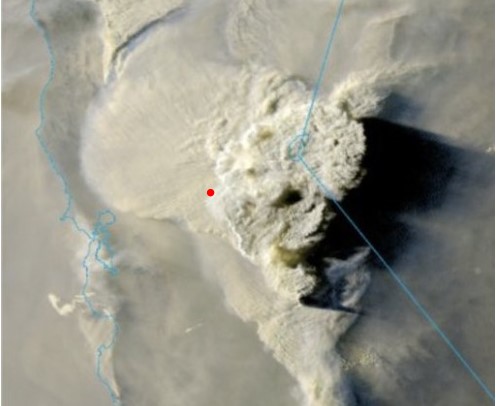 Physically, we're safe. But we have family and friends on evacuation notice, and there's the constant threat of blackouts and brownouts because power is being disrupted by the fires and everybody else is stuck indoors running their air conditioners 24/7 to try to beat back the smoke and the heat. The whole state has been asked to keep all electrical consumption to a minimum during peak hours, so I haven't been running my one functional printer at all except to finish off the last couple of roundels for the Zero Cabinet, since they were the only things I knew I could finish in just a couple of hours overnight.

But getting back to Kronos. I'm pretty sure he's printable, but haven't had a chance to test print him yet because of the reasons above.

This one has some brand new untested articulation elements that I'm hoping are going to work. I'm using a new neck design that I believe will allow for more realistic head tilting/turning, and due to the way the chest is split, the skirt needed to be it's own separate element, but one that the crotch piece can pass through and then be locked in place by the clamshell torso. This should theoretically keep it in a mostly fixed position so it's not sliding around, but it's a bit hard to tell how well that will work in reality until I actually print it.

I'm also using James' original hip sculpts which have a larger gap around the crotch area than I would normally use. If this were any other figure, I'd probably have to redesign that part (since it can mean the legs are too loose and the figure just collapses and falls forward when standing on your display shelf) but you can't see the joints under the skirt and I'm relying on the skirt itself to restrict how far the hips can actually bend. Hopefully there will be a little bit of movement, but not so much it becomes a balance issue.

Thanks again to James Lee in my Facebook group for creating the original.
He's also got a Dalek Trooper, Draconian, Chameleon, and Ice Lord that I plan on remixing the same way, but first, the Battle Damage Emperor Dalek is currently broken and needs some pretty major retooling to get the removable panels to work correctly, which I hope to get back to in another couple of weeks. (Of course, I won't be able to test print anything until my Transform is fixed and people stop lighting wildfires with their idiotic gender reveal parties.