Congrats on that! I managed to miss out on most everything I bid on, but the price got so high on some of them I started to feel like maybe I could just buy my own printer. Though I'd need to clear space in the garage for it. And probably learn a lot of new skills. And... well, it's a much longer process than bidding on a Dalek Emperor, isn't it?

Well.... as suspected, the newly revealed Keys of Marinus set includes Voord, so that figure has been pulled from the line-up.
As always, if anybody grabbed the files before I took them down, out of respect for Character Options, I ask that you not repost them anywhere else or share them around.
Once I get my hands on an official set I'll see if there's any parts of my design that would be useful for customization. I'll also see if I can make the alternate Voord-transitioning-into-Cyberman head from The Worldshapers more compatible with the official CO body. 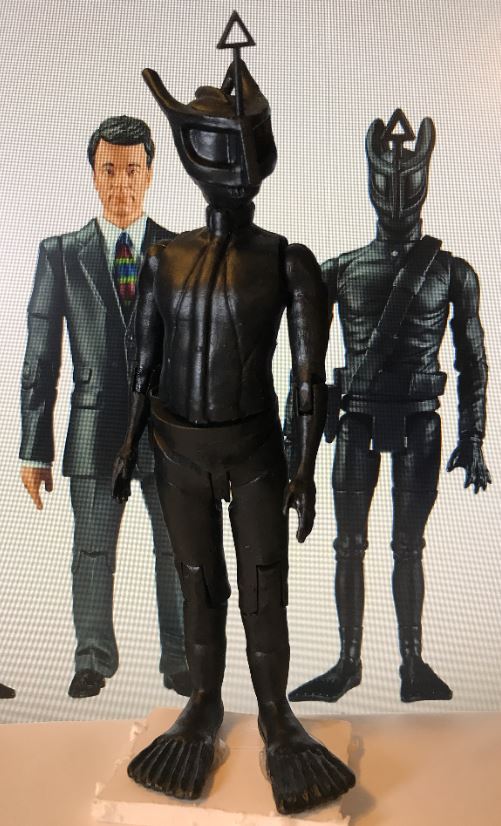 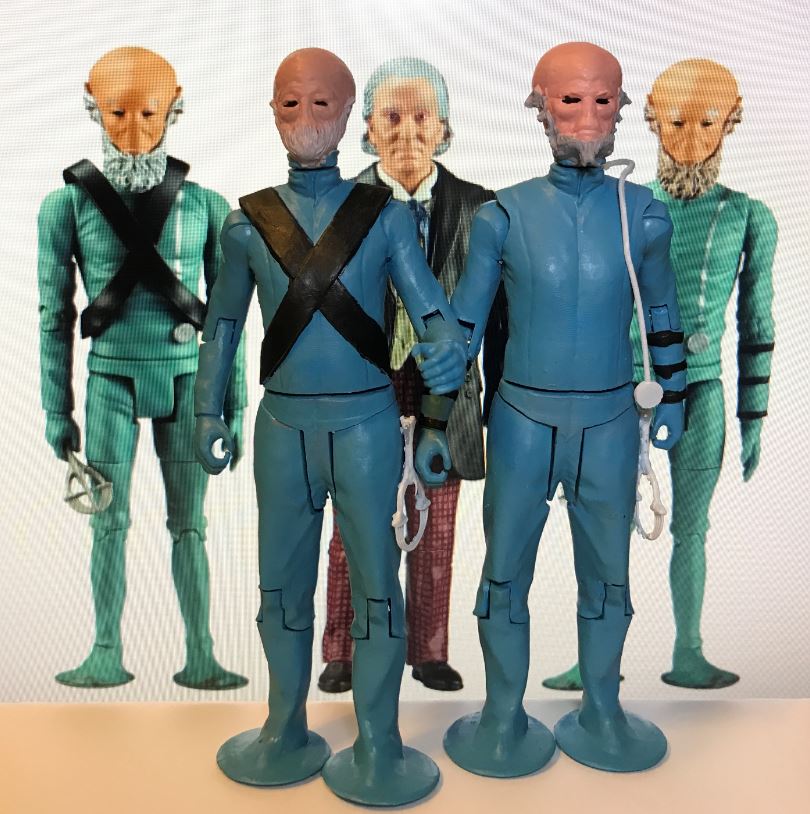 Good thing I didn't win that Voord on eBay. 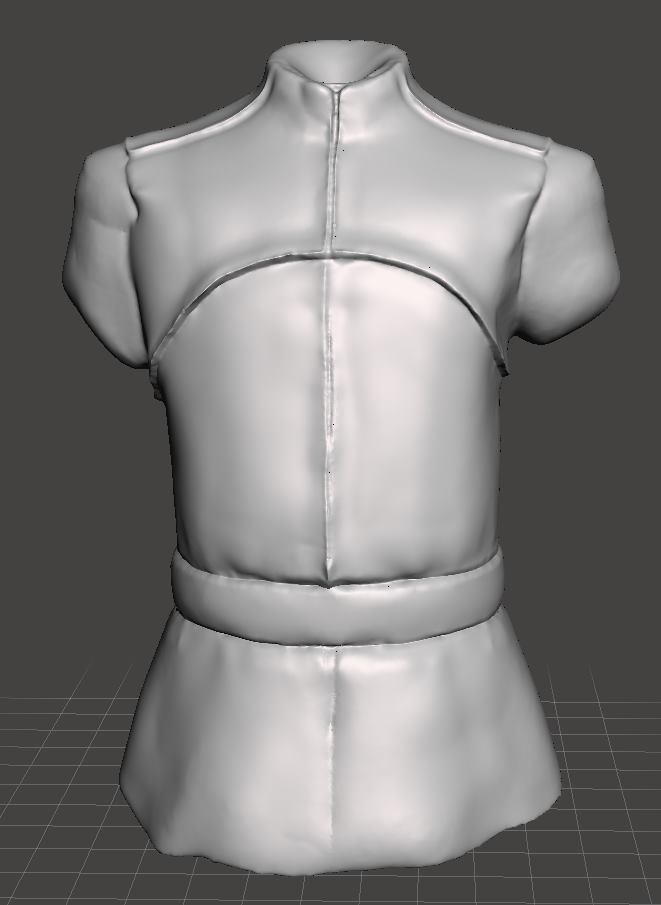 After several weeks occupied on other non-Who related projects, I finally got a chance to go back and do a bit of sculpting on Noah's torso this evening. I've decided to scrap my original plans and construct the entire body from (mostly) scratch, because the boiler suit I built for the Sensorites figures doesn't really look anything like the uniforms in this episode, and wasn't as good a starting point as I initially thought it'd be.

I ended up heavily modifying a Star Wars Admiral Thrawn body as a base for this one, though I'm rather disappointed I couldn't find any officer tunics from The Empire Strikes Back, since the cut of the uniform would have been a little closer.

I'll be saving a few different iterations of the torso as I go, since I plan on doing a Vira/Sarah Jane custom body as soon as I'm done with Noah, and a similarly cut tunic cut with modified chest seams can be used for a bunch of different Time Lords and other characters from the 70's and 80's in the future.
Top 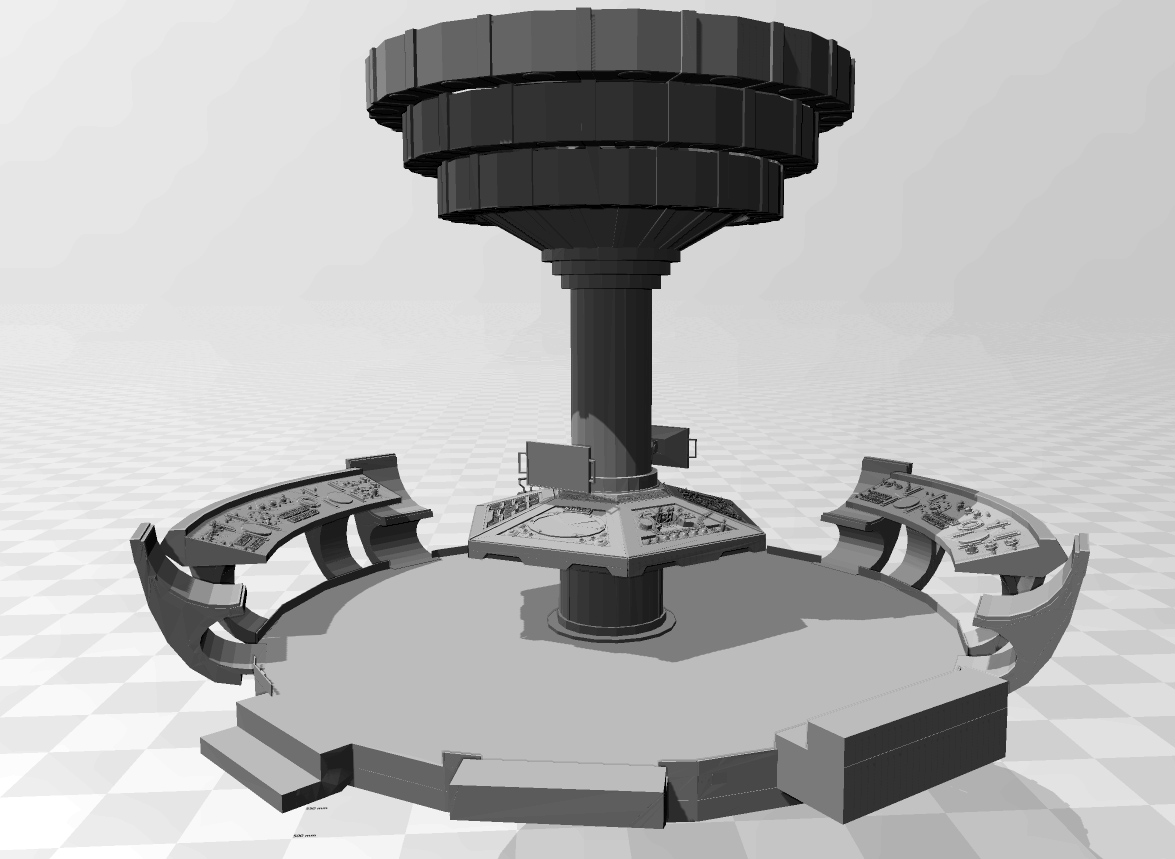 Now that I have your attention, If anybody wants a free 5.5" scale Peter Capaldi TARDIS console room play set, here you go, all the files you need are right here:
https://drive.google.com/drive/folders/ ... GU6T5cb2mk


The catch is, while a talented fellow named Michael Brennan provided me with this lovely 3D model back in 2019, it was originally created as a Maya FBX file designed for computer animation, which is notoriously un-printer friendly when converted to an OBJ or STL format file designed to be printed as a real world object. The file is riddled with corrupted geometry, zero thickness faces, and a whole host of other problems. I have slightly better software now than I did in 2019, and a few tricks up my sleeve, but there's only so much I can do to pretty it up. This is what it looks like up close: 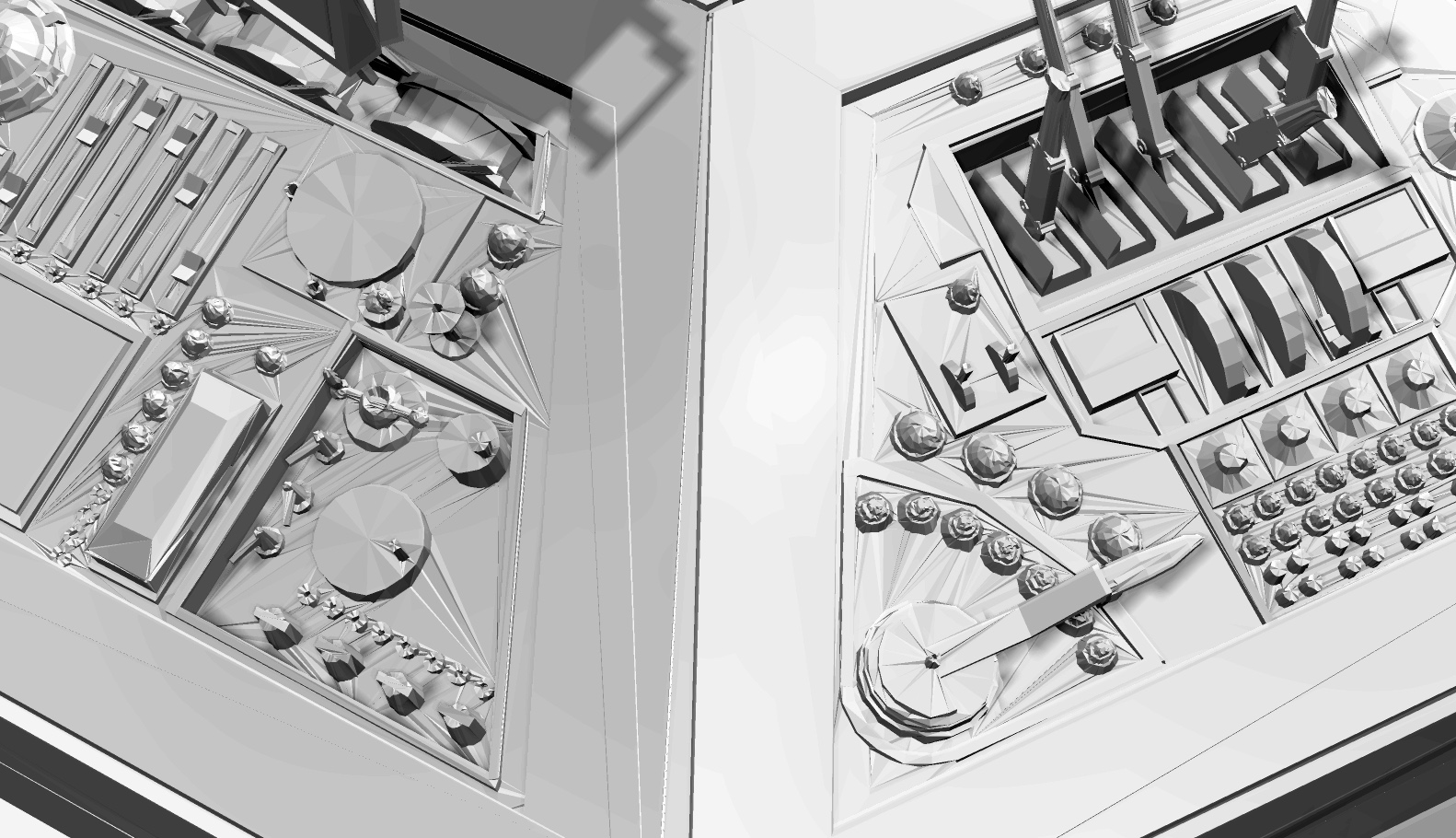 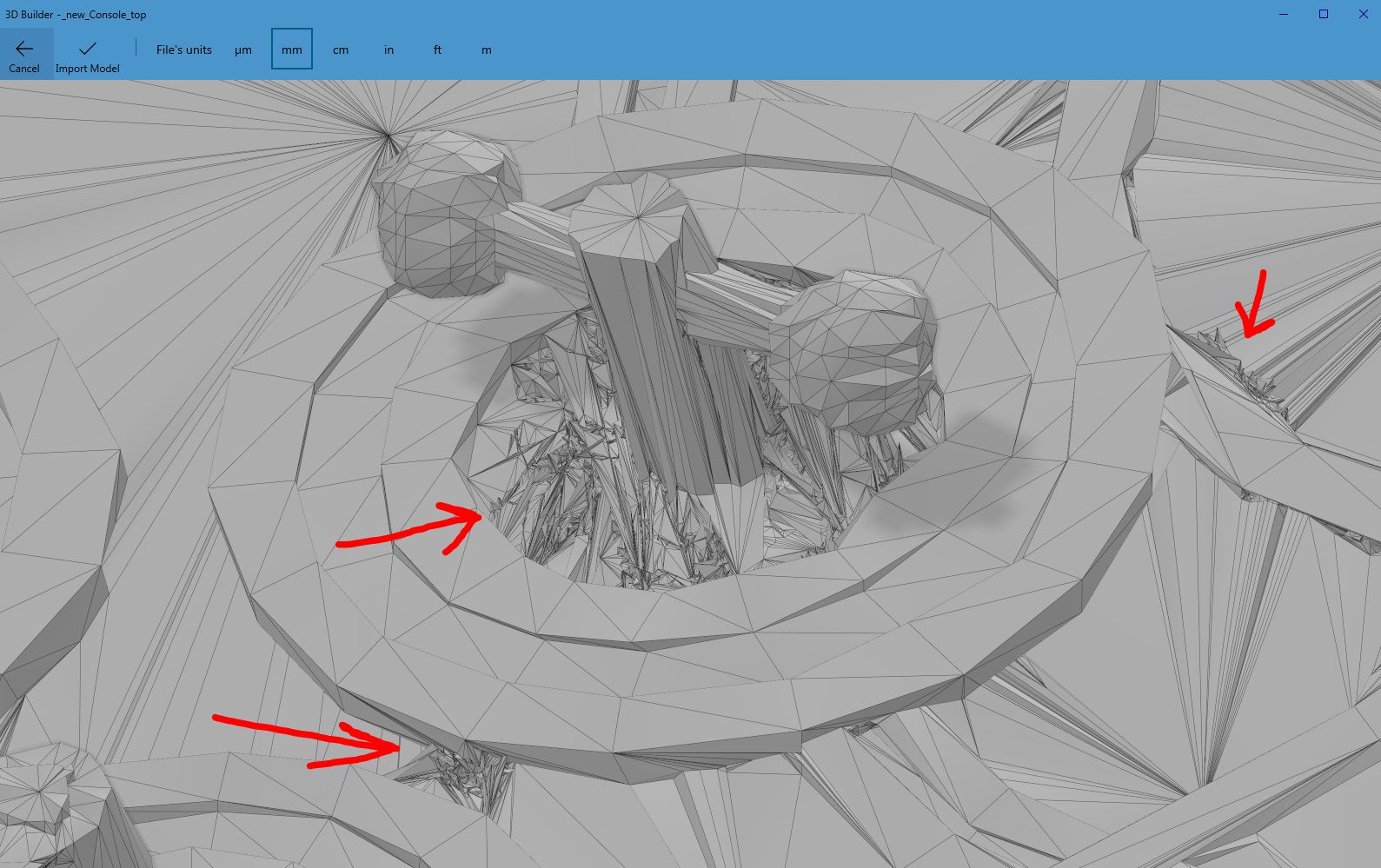 While I've resized the model to 5.5" scale, and even created a parted out version that might be 3D printable, it's not going to be pretty. The biggest problem are these runaway geometry "blooms" which sprout up everywhere. Every time I alter the file to try to piece parts out or make parts solid, they get bigger and more corrupt, and a lot of them are in places where it's impossible for me to cut them out manually and close up the gaps in MeshMixer. Unfortunately, each of these blooms contributes hundreds or thousands of polygons towards the total polygon count of the model as well as the total file size, both of which interfere with my ability to import the model into TinkerCAD for manipulation.

The good news is that through trial and error I have just barely managed to get a version imported into TinkerCAD that I can theoretically use as a base to create something a little more print friendly. The bad news is, that it looks like the proverbial dog's breakfast and isn't fit for anything more than a rough skeleton from which to build off of. 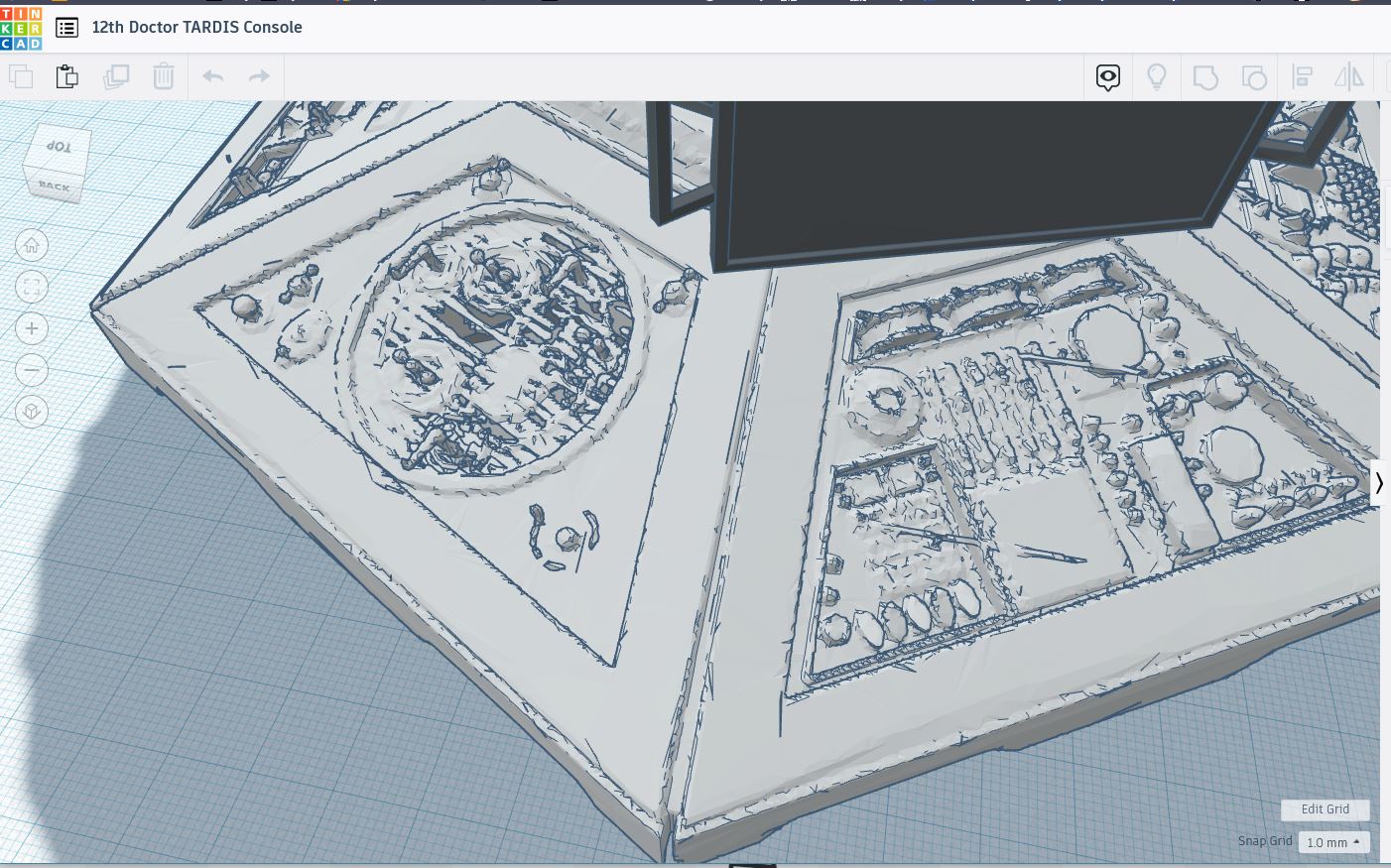 Some people in my Facebook group are taking a look at the files above to see if they can do a better job when it comes to cleaning up and removing the corrupted material and preserving the shapes we want to keep. If we're all really lucky, one of them may figure out a trick that I missed, and possibly give me a cleaner version that I can attempt to re-import.

Sadly, I don't have the kind of time necessary to completely rebuild this console switch by switch, rivet by rivet, the way I did with the 8th Doctor Console (which also took over a year to complete.) There's also the small matter of the play set itself being absolutely massive.

In comparison, my 8th Doctor Console room is only 17" wide by 12.5" tall, and just barely fits on a regular sized bookcase hanging over the edge by 6". Even reducing the scale slightly, there's no way this entire model would ever fit on a normal sized shelf. We're talking coffee table at least. This sort of explains why Character Options never released an official play set in 5.5" scale.

I suspect that if I do end up printing this one myself, it'll just be the central console itself minus the base platform and side pieces, though if I can leave the base as an optional extra for the other pieces to slot into I will.

What I will attempt to do in the coming weeks is this:
I won't be spending a year taking caliper measurements and making sure every little piece is perfectly screen accurate. But I will try my best to produce something printable that looks close enough to the real thing that you can tell what it's supposed to be.
Top

Whoah! That's massive and amazing. Good luck on the smoothing process. I'm very curious to see how it turns out, even if it's just the console alone. An eight-foot console room is... um... "prohibitive" at best.

On another subject, what do you make of this resin printer? Seems like a decent printer at a decent price, but I really don't know enough to be sure.

skifflebits wrote: ↑
Mon Aug 30, 2021 3:49 pm
What do you make of this resin printer? Seems like a decent printer at a decent price, but I really don't know enough to be sure.

The Elegoo Mars and Anycubic Photon are both amazing little workhorses. I own a Photon, but I recommend either of them since they're functionally nearly identical. The main difference is that the Photon has a hinged lid, while the Mars has a lift off cover. This won't matter to most people, but it can be important if you were planning on putting this printer on a bookcase or inside a cabinet rather than on a counter or table, since you need twice the vertical clearance space to be able to lift the cover on and off the Mars. That said, being able to remove the cover completely means it's a lot easier to clean and get the vat in and out on.

One other nice thing is that this is the newer model Mars 2 which comes with the monochrome screen, which is supposed to be even better and sharper (and last longer without replacing the screen) than the 1st generation models. It's also got a slightly larger print area compared to the original Mars and Photon, so if you're considering getting one, I'd say this is a good choice.
Top

Thanks for the insight! I may well pick one of these up...

How's the air filtration on it?

How's the air filtration on it?

I guess you learn something new every day. I looked into it, and much to my surprise, it appears that the Elegoo Mars and Photon do differ significantly in terms of exhaust configuration. The Photon pumps fumes out through a back vent (into whatever room you're working in unless you hook up a ventilation system) but the Elegoo Mars is a sealed chamber design, so fumes only escape when you lift the lid off to remove your print or top up the resin reservoir. This is probably the better of the two options, and had I know that when I purchased my first machine, I might have gone with an Elegoo Mars myself.

The Elegoo does have a couple of small fan vents on the side, but these are air intake ports to pass cool air over the motherboard and LED array. They are not exhaust ports that pull fumes away, and apparently the 3D printable exhaust port hookups you can find over on Thingiverse are more trouble than they're worth and can actually destroy your machine because they impede airflow over the circuit boards.

Depending on where you're operating the printer and how sensitive you are to fumes, if you did want to provide extra filtration for your Elegoo Mars, the safest way to do so would be to place it in a small cupboard (remember that it does have to be tall enough for you to lift the lid off) which can then be hooked up to a standard inline duct fan to pump any stray fumes out through a window or dryer exhaust vent, possibly with a sheet of charcoal filter over the intake grate. That said, I'd try it without all those extra steps first, since the fumes are usually only noticeable while the printer is actively printing and curing new layers. If you let the machine sit for a little while after printing before you take the top off, the fumes should be no worse than what you'll encounter just from having taken the lid off a bottle of resin or from having resin sitting in the vat.
Top

Interesting. I don't have a lot of space at the moment, but even with the filter it sounds like running it in the house wouldn't be a terribly good idea.

If I can set up a viable print space in the garage, I may opt for that.