After taking some time off for the holidays, I'm currently back to printing Kroagnon.
Once that's done, I plan on focusing on a few more SLA resin reprints before I move on to new designs.

What I desperately need to do is paint and assemble the big pile of half-finished figures I've got out in the garage. This is my least favorite part of the job since it's so easy to screw up something I worked extremely hard on, but it needs to be done so I can reclaim space for some of my other projects (like finishing up the full-sized Pertwee era Dalek I've had sitting in the corner of the garage for the last three years)
Unfortunately, it's freezing cold out there right now. While I appreciate any California weather that isn't 90+ degrees, the garage is only ever comfortable to work in during early spring and fall, so it's become my practice to accumulate prints and only get around to finishing them during the few weeks out of the year where it's reasonably comfortable to do so.

It's been 2 years since I last had a shelf-cleaning sale, so my goal is to do another one some time in February or March, depending on how long it takes me to finish painting and generally prettying up some of the rough prototype figures I've got laying around.

For those who didn't catch my last sale, I'll only be selling prototype figures that aren't my final "finished" design. Some may have minor printing defects, limbs that don't move properly, slightly inaccurate scale issues, or are just older versions that I went back and improved upon later. Still, if you don't have a 3D printer, and want to own one of my figures, this is the only way I ever sell any of my work, so start saving your grotzits now, and continue watching this space.

I haven't taken a complete stock yet, but I can say that there will definitely be multiple Quarks, Keller Machines, Chumbleys, Wirrn, Rutans, Exxilon Roots, Taran Wood Beasts, Toymaker Robots, and 12th Doctor guitars, plus at least one SIDRAT, Servo Robot, Dalek Transmat, Alpha Centauri and War Machine.

All proceeds will be recycled back into the project, and hopefully used to offset the cost of a Phrozen Transform. A next-generation resin printer being released in April that can print at 10 micron resolution and comes with a stupidly massive 290 * 160 * 400 mm print area, about 4x bigger than the Moai 130, which used to be the biggest personal resin printer on the market. The FEP vat so ridiculously big, it takes 4 bottles of resin to fill it completely!

While I still plan on using the Anycubic Photon as my primary printer, it'd be nice to have something around big enough to print an entire Dalek Time Machine or War Machine without having to break out the filament printer (which I haven't been able to get operational for months.) Technically, it's large enough that I could use it to print a Cybermat, Ice Warrior helmet, or other full scale props, without having to break them up into smaller pieces.
Top

The Phrozen Transform is $60k?

What kinds of prices are we talking?

No, $2000. And it was previously on pre-order sale for $1500, but it looks like they've upped the price before I could get in on that action.
This is still a really expensive printer, but if I can sell off my Moai, I might be able to make back about $600 of that, and then supplement with the sale of my shelf clearance items.

I'll probably start most of them off at a fairly reasonable $15-$30 per figure, depending on their size and condition. Some are going to be nicer looking or have more articulation than others, and obviously, the big/complicated one-offs like the SIDRAT, Dalek Transmat, and War Machine are going to be more expensive. Mind you, this is just the starting price though, and I expect most of them will end up going for at least twice that. I will try to space out similar figures across separate days, or at least several hours, so that people who get outbid on the first one might have a better chance of nabbing the second.

I can't remember what everything got up to with the previous sale, but looking back at some of the photos I kept, I had about 20 prototype figures that I split over two days, and I recall the noticeably bowed War Machine, two Yeti (including my one-off "Target Book Cover" variant), and a slightly too-small Dalek Time Machine ended up going for way more than I anticipated, considering their imperfections.
This time around, I may have around 30 pieces, but it's mostly smaller stuff. On the plus side, the overall the quality is better, since I've had two years in which to figured out what the hell I'm doing.

I've also got some really tiny stuff (like Key to Time segments and Kroagnon eyes) that I'm not even going to bother listing, but will be throwing in as freebies for people who buy multiple items, because I often use the smaller pieces as test prints after I've releveled or changed exposure settings, so I've got a whole bunch of them lying around the place.
Last edited by 3DPrintingDoctorWho on Tue Jan 14, 2020 3:07 am, edited 1 time in total.
Top

No, $2000. And it was previously on pre-order sale for $1500, but it looks like they've upped the price before I could get in on that action. 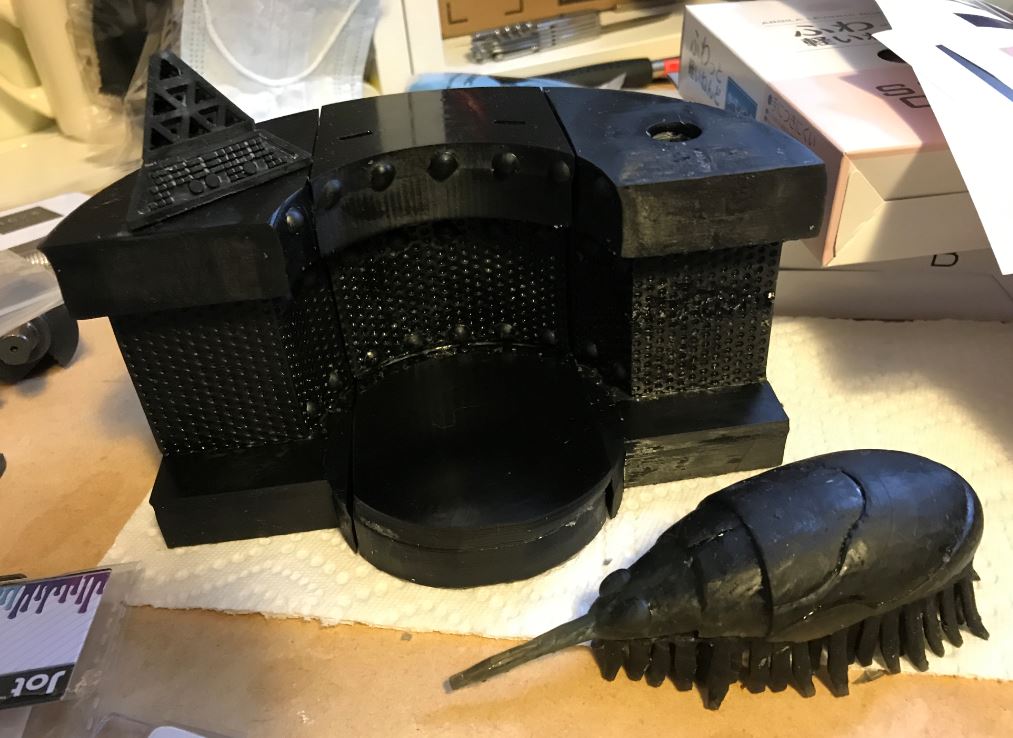 I've updated the Larvae Gun/Venom Grub figure to have thicker legs that are less prone to snapping off, and an alternate pre-hollowed body that should work better for SLA printing (and be fine for PLA). Google Drive files have been updated.

I've got the last of the black bits for Kroagnon printed, but there was some "Z axis wobble" causing the middle section to print off-center for a large chunk, so the three pieces don't fit flush together. Hopefully, it's something I can sand down and patch out in the garage without needing to reprint.

This is a persistent problem with the single rail Anycubic Photon printer, and one of the few places where the new and not-really-improved Photon S is superior. So I've recently purchased a rather expensive dual-rail upgrade kit that had to be imported all the way from England that gives me Photon S style rails on a classic Photon chassis, that I will attempt to install over the weekend once I'm through printing a few more pieces with the current resin.

I'm trying to be good and force myself to work on tidying up loose ends rather than diving head-first into another brand new figure.

I've played around a little bit with the Polly figure but am becoming increasingly frustrated with the way TinkerCAD auto-reduces any high polygon count shapes when you import them. Unfortunately, no other software seems to utilize the "subtract this shape from this shape" construction method which is absolutely essential for this sort of precision design, so I'm sort of stuck.

I've also got my poor Voord figure that I started almost a year ago that I keep meaning to return to, and really should, because I need to work out some fairly complex dual-pivot joints for humanoid figures, and it would be better to do that on a fairly straightforward design than the insanely complex one I want to work on next. (Here's a hint: It's one that people keep asking for, but it has so much complicated surface detail, it may give TinkerCAD a heart attack once I start trying to import/export the various body pieces)
Top

I've got an app for my iPad called Shapr3D that seems to have the "subtract this shape from this shape" option. Maybe it's worth checking out?

skifflebits wrote: ↑
Sun Jan 19, 2020 2:12 am
I've got an app for my iPad called Shapr3D that seems to have the "subtract this shape from this shape" option. Maybe it's worth checking out?

Thanks for the suggestion, but I don't have an iPad. Considering how much I hate the clunky touchscreen interface on my iPhone, it probably wouldn't have the precision movement of TinkerCAD. Specifically the two features I need to have is additive/subtractive design with a variety of predefined flat angled and curved shapes that I don't have to drag wireframe elements around on (though I would certainly accept that as an added feature) and a precision grid and measurement system so you can type in the exact x/y/z width of those predefined shapes and then move them up/down left/right in precise snap-to increments of anything from 5.0mm to 0.1mm by using the arrow keys rather than dragging around randomly with the mouse (which almost assuredly means something is going to be off from where you want it). I also need to be able to import my own predefined shapes (without loss of quality) and move them around in the same way. If I could also have the option of moulding any of these pieces like clay, that would be icing on the cake.

It seems like most CAD software is divided into to ways of thinking; precision geometric engineering where the shapes are adjusted by changing wireframe vertex points or precise shape-sheet variables (which is far too mathematical and complex for me), or free-form sculpting programs like Z-Brush and Meshmixer where you're pretty much using a mouse to push and pull clay. I need something in the middle that will let me add/subtract perfectly symmetrical geometric shapes with exact precision measurements, but then also free-form sculpt them when I need to.
Top

It’s finally up to 55 degrees out in the garage so I can do a bit of painting if I bundle up in double layers. This afternoon was spent putting down brown, green, and yellow base coats for the Wirrn, Rutan Scouts, and Larvae Gun.

I haven’t even started on the three boxes of white, grey, silver, and black pieces yet. 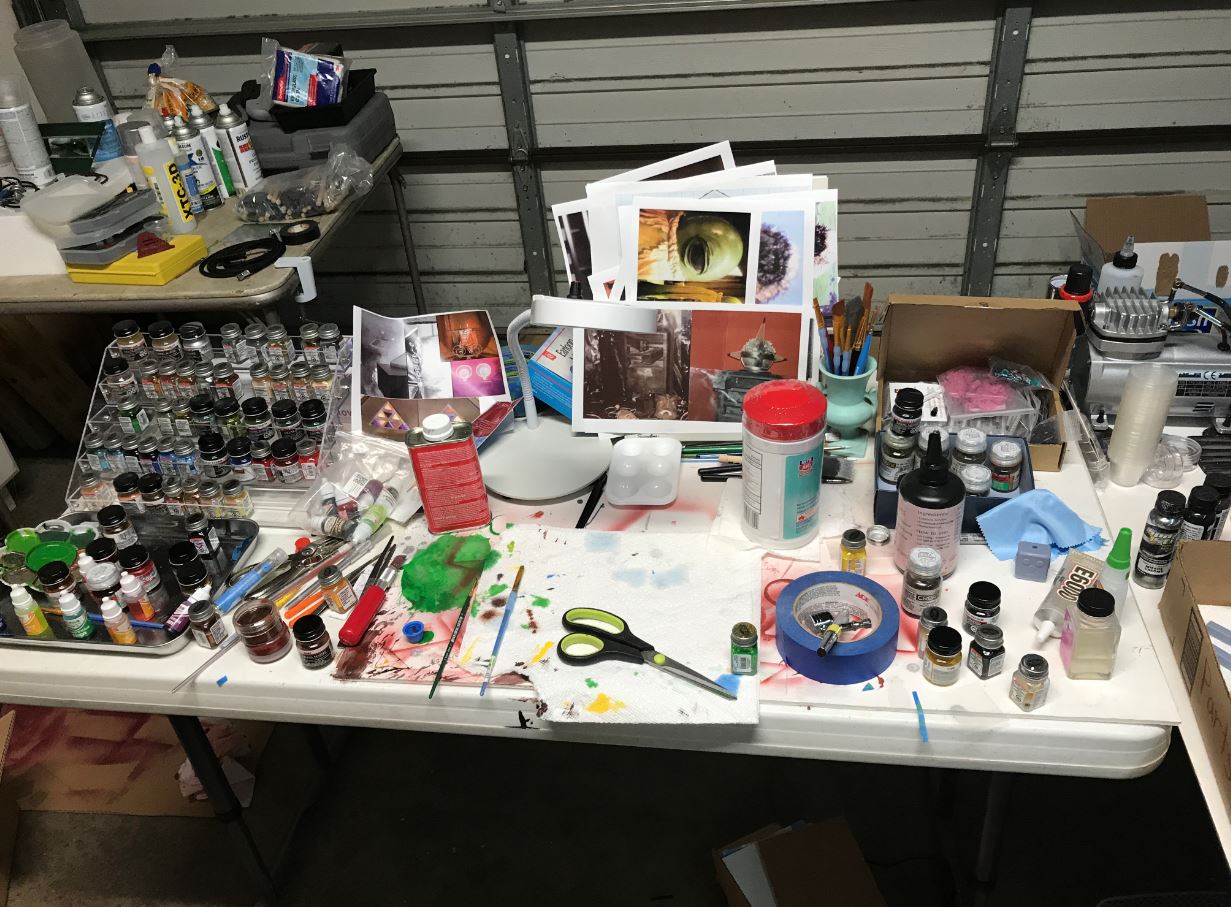 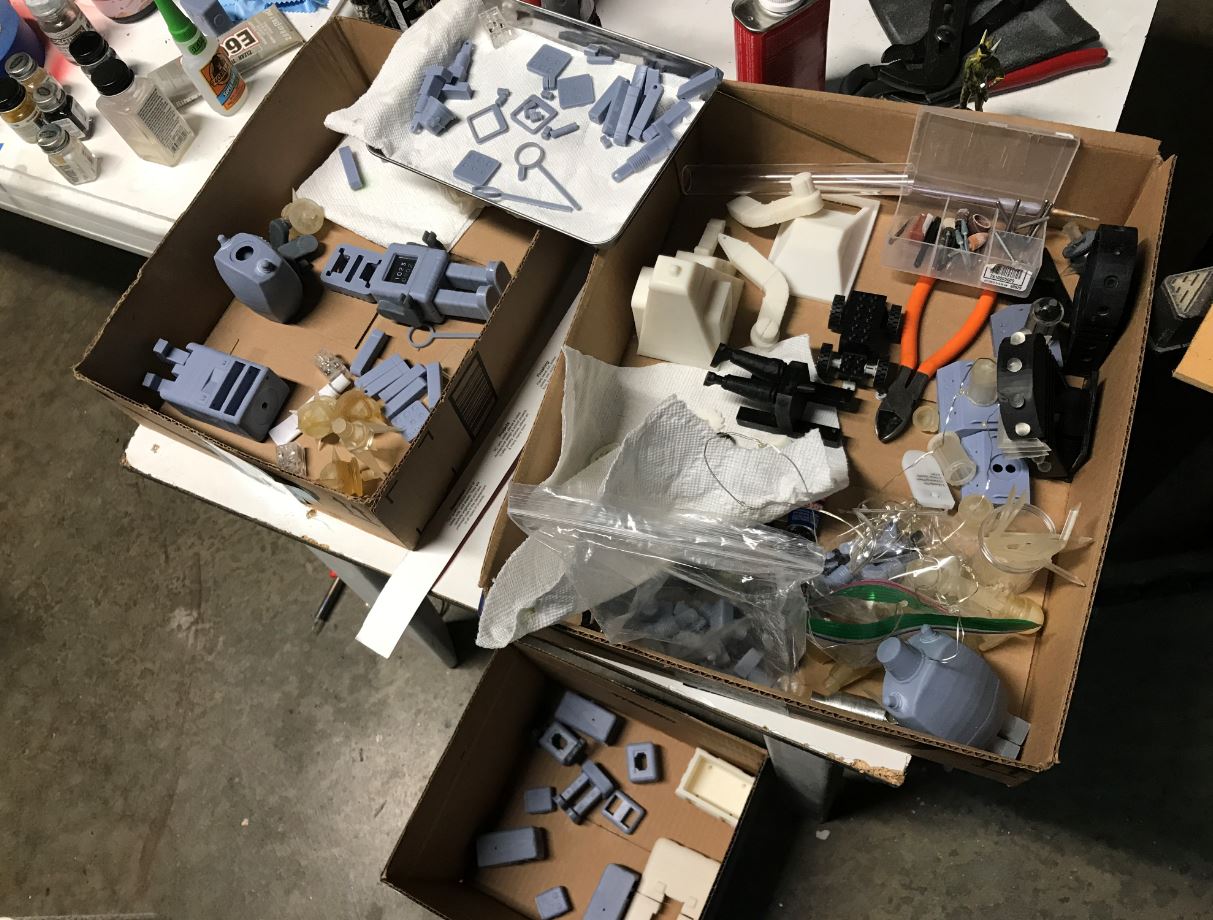 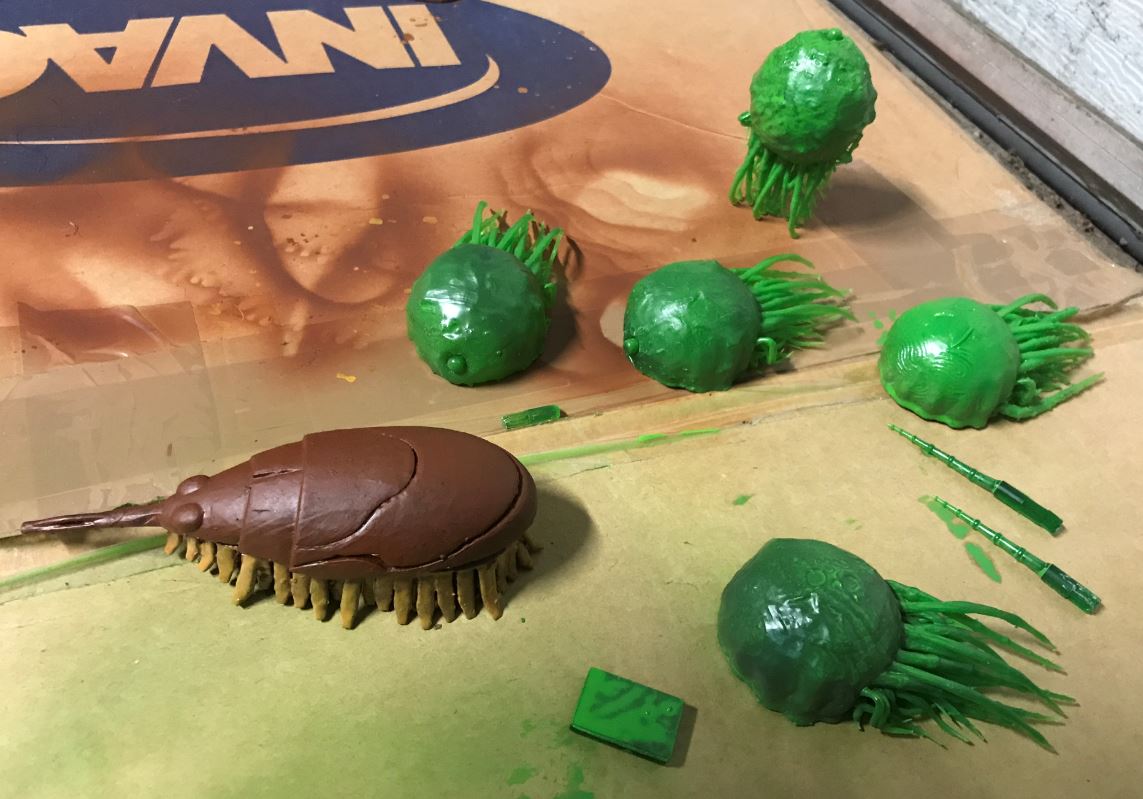 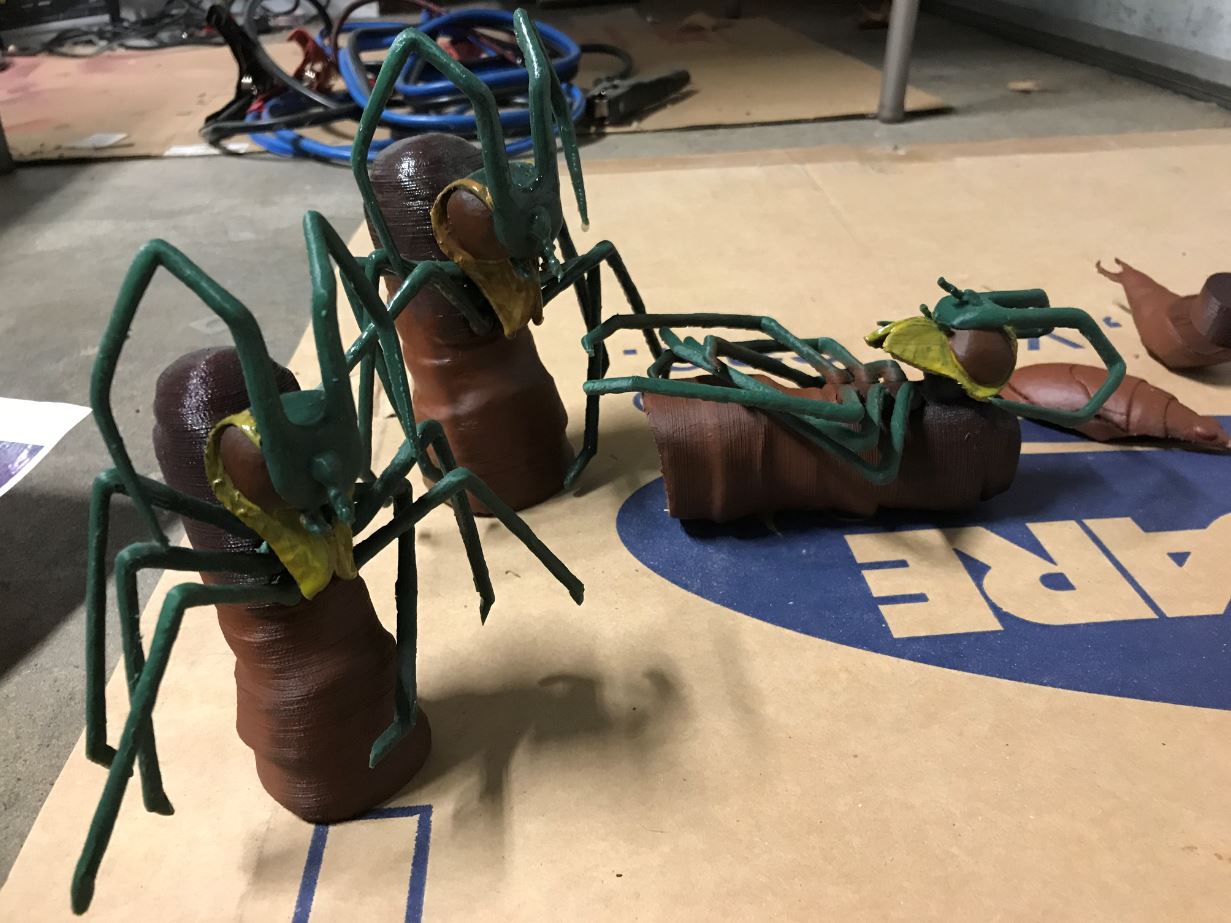 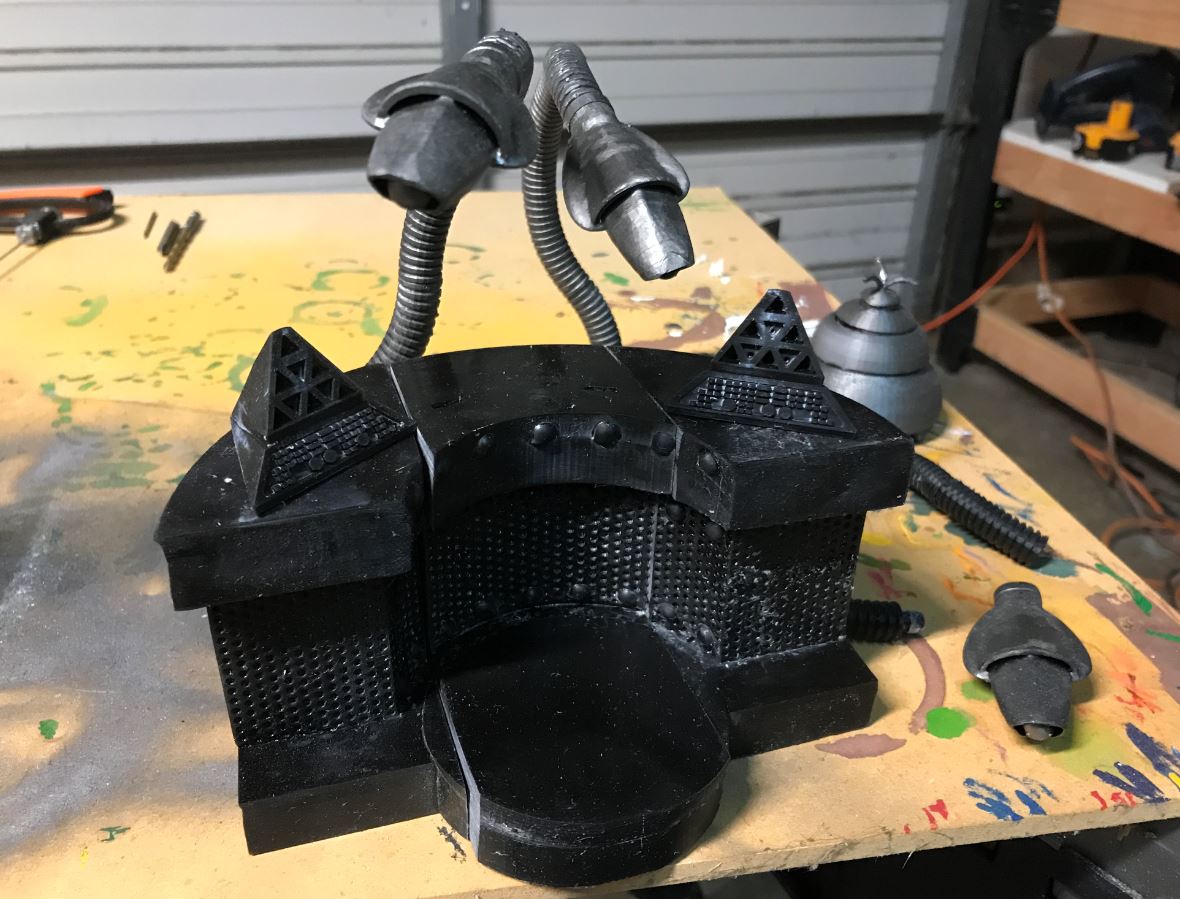 Kroagnon is going to be super fun because the LEDs have to be installed prior to assembly, but it's going to take a lot of extra resin and paint to try to hide the division lines between the three segments, so it'll be a juggling act between patching, painting, and assembly.

I think if I reprint again, I'm going to make life easier on myself and make the top counter a separate lift-off piece so I can easily see what I'm doing without having to feed and crisscross wires up through a confined space with tweezers, but that will probably wait until I have my Phrozen Transform and can do the top and bottom sections all in one go.
Top

Shapr3d is actually designed to be incredibly precise -- grid precision down to multiple decimal places, etc. -- but I have a 12.9" iPad Pro with a stylus. It wouldn't work nearly as well on a phone.